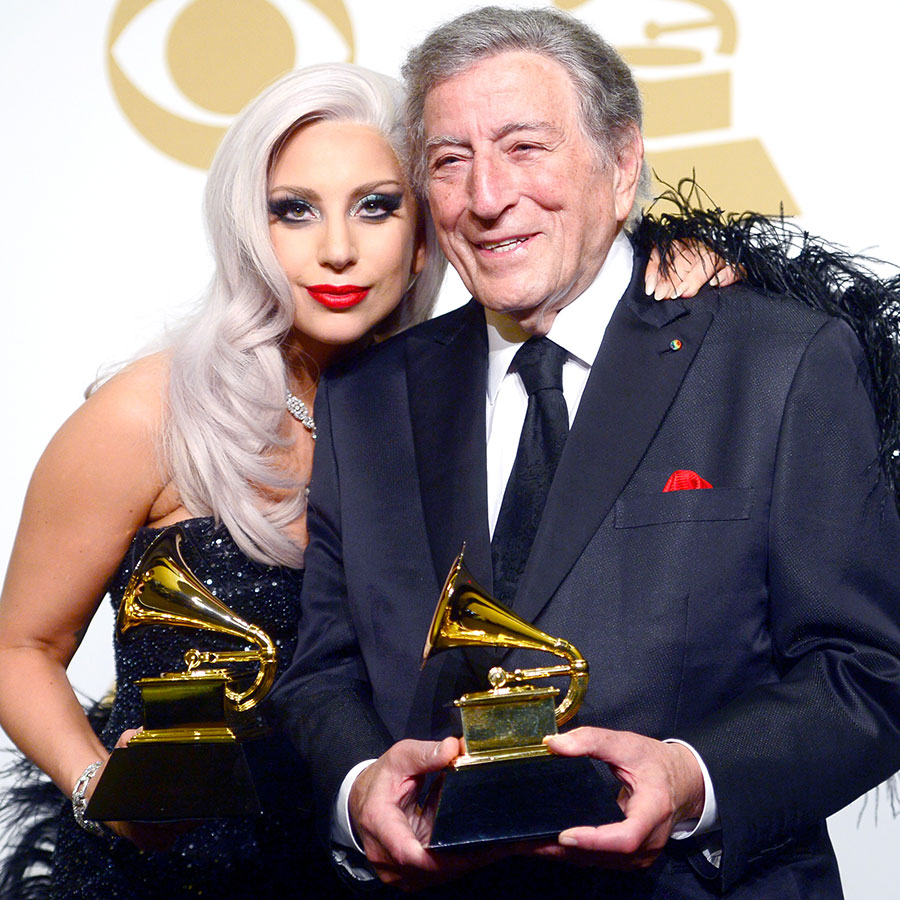 Lady Gaga and Tony Bennett during the 2015 Grammy Awards, where they won the award for Best Traditional Pop Vocal Album for their duets disc 'Cheek to Cheek.' The pair's follow-up duets album, 'Love for Sale,' is nominated for six Grammys including Record of the Year and Album of the Year. Photo: Frazer Harrison/Getty Images

This year’s Grammy Awards ceremony honouring top performances in music has been postponed indefinitely because of the rapid spread of the Omicron variant of the coronavirus, organizers said on Wednesday.

The show had been scheduled to take place at an arena in downtown Los Angeles and broadcast live on the CBS network on Jan. 31.

“Given the uncertainty surrounding the Omicron variant, holding the show on January 31 simply contains too many risks,” CBS and the Recording Academy said in a joint statement, adding that a new date would be announced soon.

Nominations for the awards were announced in November. Pianist and bandleader Jon Batiste led a field that spanned rap to jazz music and embraced newcomers from teen pop sensation Olivia Rodrigo to veteran crooner Tony Bennett, 95, who won his first Grammy in 1963.

The 2021 Grammy awards also were postponed because of the COVID-19 pandemic. The ceremony was staged in March instead of January and included a mix of pre-recorded and live segments in front of a small, socially distanced crowd.

Organizers had hoped to return this year to something closer to the traditional celebration with a large audience inside the former Staples Center, now called Crypto.com Arena. Late-night television host Trevor Noah had been tapped to host the event.

CBS and the Recording Academy said they consulted local officials, health experts and artists before deciding to scrap the January date.

“The health and safety of those in our music community, the live audience and the hundreds of people who work tirelessly to produce our show remains our top priority,” they said.

Other entertainment industry events have been delayed or scaled back.

Organizers of this month’s Sundance Film Festival in Park City, Utah, said on Tuesday they had canceled in-person events and would move them online.

The Critics Choice Awards, which had been set for this Sunday, have been postponed with no new date scheduled.

(Reporting by Lisa Richwine in Los Angeles and Bhargav Acharya in Bengaluru; Editing by David Gregorio and Bill Berkrot)

“Music Is a Miracle”: Lady Gaga Recalls Singing With Tony Bennett as He Battles Alzheimer’s Ahead of Their One Last Time Concert Special

Tony Bennett Turns 95: Ahead of Hitting the Stage with Lady Gaga on His Birthday, Revisiting Our Conversations with the Legendary Crooner