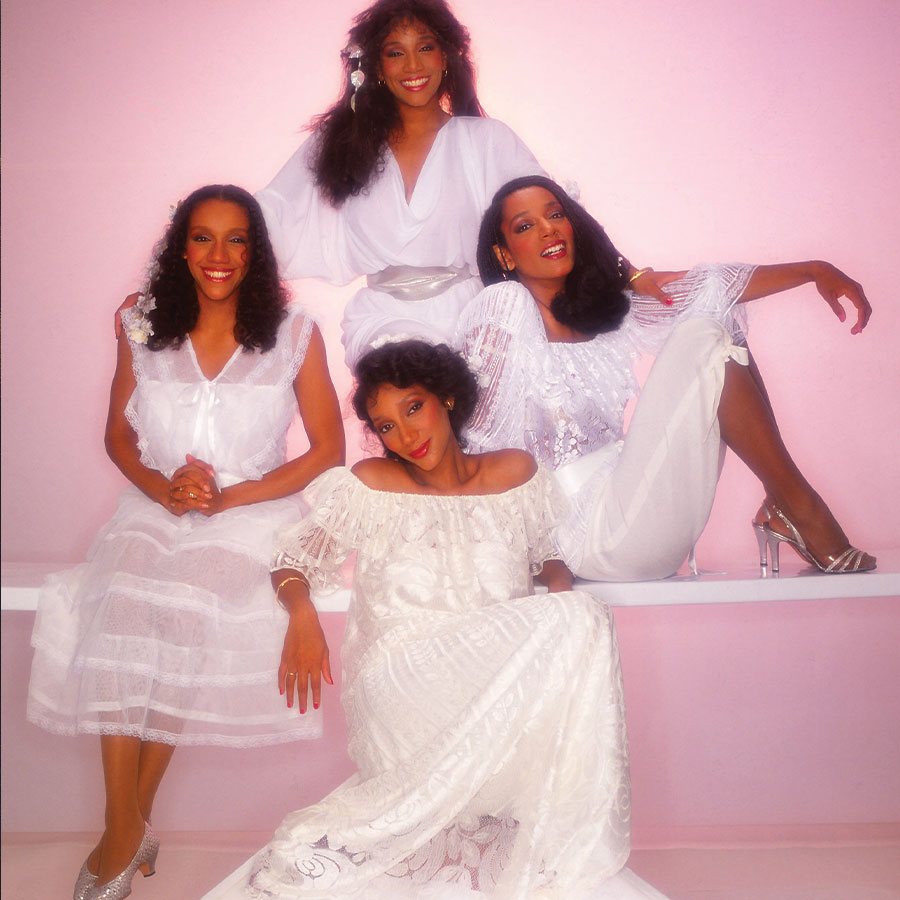 Iconic disco group Sister Sledge, seen here in a 1984 portrait, is undergoing a major rebranding under the direction of original member Debbie Sledge (left), which includes bringing younger members of the family into the group. Photo: Harry Langdon/Getty Images

Sister Sledge, the legendary group that exploded onto the disco scene in the late 1970s with energizing hits like “We Are Family,” is making a return with a new roster that showcases their musical family roots once again.

Debbie Sledge, who helped form Sister Sledge in the early ’70s with sisters Joni, Kim, 64 and Kathy, 63, announced a rebranding of the group and welcomed a few new Sledge family members into the fray this month.

Joining Debbie in the new group, which will now go by the name of Sister Sledge ft. Sledgendary, are Debbie’s children Camille and David and her nephew Thaddeus Sledge, son of the late Joni, who passed away in 2017 at the age of 60. The group will also include an influence from outside of the Sledge family in vocalist Tanya Tiet, who has performed with Debbie and Sister Sledge for nearly a decade.

Debbie also promised new music from the multigenerational powerhouse in 2022.

“Sister Sledge ft. Sledgendary is a whole new thing!” Debbie told The Daily Mail. “It is a unique evolution of the Sister Sledge legacy, emerging from a rich musical heritage.

“Combining fresh creative artistry, slick production and the dream collaboration of Camille, David, Thaddeus, Tanya Tiet, myself and our incredible musicians, we are beyond excited to be releasing new music in 2022.”

Debbie and her sisters’ love for music was born out of family tradition. Their father, Edwin Sledge, a renowned tap dancer, was the first African American to perform on Broadway and their mother, Florez Williams, pursued a career as an actor and dancer ass well.

But their largest influence was likely their grandmother, Viola Williams, who was a lyric opera performer. She not only taught the sisters basic vocal training, she introduced them to the stage, securing them gigs at charities, churches, and other events.

The latest generation seems to have inherited those musical genes as well.

Debbie’s daughter Camille is the lead vocalist for the eclectic Phoenix Afrobeat Orchestra, while her son David, a singer-songwriter and producer, has opened for the likes of ABC, Earth Wind and Fire and Bruno Mars.

Meanwhile, singer Thaddeus has followed in his mother Joni’s footsteps as a performer, most recently putting on a series of jazz influenced Christmas concerts in Copenhagen.

Formed in 1971, Sister Sledge put out two underperforming albums before finding success with the 1979 album We Are Family, which featured the title track that would become their signature song as well as their first chart-topping hit, “The Greatest Dancer.”

The album, produced by Nile Rodgers and Bernard Edwards of the band Chic, also featured disco classics “Lost in Music” and “Thinking of You.”

Following their explosion onto the music scene, the group remained relevant beyond disco’s golden era, pumping out new albums throughout the ’80s and ’90s, including their celebrated release African Eyes (1997) — an album that Joni produced and earned the group a Grammy nomination for Best Produced CD.

In  1989, Kathy left the group to pursue a solo career. While she still performed with the band on occasion, the situation soon sparked a legal battle over Kathy’s right to use the Sister Sledge name for her solo act.

“It was crazy. For like the past 20 years as a corporation they voted that I was the only sister that couldn’t say I was of Sister Sledge or from Sister Sledge,” Kathy told PA News at the end of December.

Despite the legal issues, Kathy says her relationship remains strong with her sisters.

“Kim actually is my neighbour. We get along — we go and get coffee. She knocked on my door right before the pandemic and she said, quote unquote, ‘I’m sorry we’ve been so mean to you’. And she voted back my rights,” she said.

“I would never fight with my sisters. I want that to be known.”

While the name issue has been resolved, before the group’s recent rebranding Kathy also expressed concern over how diluted Sister Sledge’s image had become.

“If you go to [the Sister Sledge] website, you see [a photo of] three faces you don’t know, which is basically Debbie and her family,” she explained.

“What we are really trying to do is, if a 14-year-old wanted to do a book report or essay on Sister Sledge you should be able to pull up the authentic sisters.

“So we’re working on that. And Kim and I get along fine.”