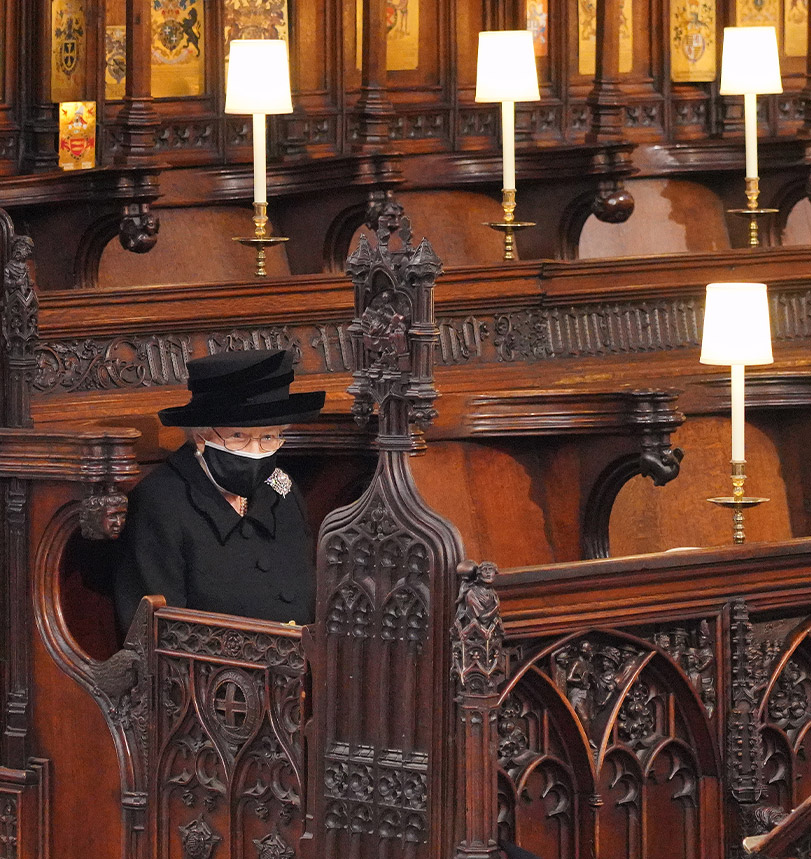 British Prime Minister Boris Johnson's office has apologized for a party that not only took place during lockdown, but also fell on the eve of Prince Philip's funeral. Here, Queen Elizabeth follows social distancing protocols as she sits alone during the funeral service at St. George's Chapel at Windsor Castle. Photo: Jonathan Brady/WPA Pool/Getty Images

British Prime Minister Boris Johnson’s office apologized to Queen Elizabeth on Friday after it emerged that staff had partied late into the night in Downing Street on the eve of Prince Philip’s funeral, at a time when mixing indoors was banned.

Johnson is facing the gravest crisis of his premiership after almost daily revelations about a series of social gatherings during COVID-19 lockdowns, some held when ordinary people could not bid farewell in person to dying relatives.

After building a political career out of flouting accepted norms, Johnson is now under growing pressure from some of his own lawmakers to quit. Opponents say he is unfit to rule and has misled parliament by denying COVID-19 guidance was breached.

In an extraordinary twist to a saga that has been widely lampooned by comedians and cartoon artists, the Daily Telegraph said drinks parties were held inside Downing Street on April 16, 2021, the day before Prince Philip’s funeral.

“It is deeply regrettable this took place at a time of national mourning and No. 10 (Downing Street) has apologized to the Palace,” Johnson’s spokesman told reporters.

Johnson was at his Chequers country residence that day and was not invited to any gathering, his spokesman said.

Such was the revelry in Downing Street, the Telegraph said, that staff went to a nearby supermarket to buy a suitcase of alcohol, spilled wine on carpets, and a swing used by the prime minister’s young son was broken.

The next day, Queen Elizabeth bade farewell to Prince Philip, her husband of 73 years, following his death aged 99.

Dressed in black and in a white trimmed black face mask, the 95-year-old Elizabeth cut a poignant figure as she sat alone, in strict compliance with coronavirus rules, during the funeral service for Philip at Windsor Castle.

Opponents have called for Johnson, 57, to resign, casting him as a charlatan who demanded the British people follow some of the most onerous rules in peacetime history while his own staff partied at the heart of the British state.

A small but growing number in his own Conservative Party have echoed those calls, fearing it will do lasting damage to its electoral prospects.

Johnson has given a variety of explanations of the parties, ranging from denials that any rules were broken to expressing understanding for the public anger at apparent hypocrisy at the heart of the British state.

“We need to look at the overall position we’re in as a country, the fact that he (Johnson) has delivered Brexit, that we are recovering from COVID … He has apologised.”

To trigger a leadership challenge, 54 of the 360 Conservative members of parliament must write letters of no confidence to the chairman of the party’s “1922 Committee”.

The Telegraph said as many as 30 such letters had been submitted.

Johnson faces a tough year ahead: beyond COVID, inflation is soaring, energy bills are spiking, taxation will rise in April and his party faces local elections in May.

One of the April 2021 parties was a leaving event for James Slack, a former director of communications at Downing Street, who on Friday apologised “for the anger and hurt caused”.

Slack, now deputy editor of the tabloid Sun newspaper, said in a statement to PA Media that the gathering “should not have happened at the time that it did”.

British police said on Thursday they would not investigate gatherings held in Johnson’s residence during a coronavirus lockdown unless an internal government inquiry finds evidence of potential criminal offences.

Following the apology, both politicians and Britons took to Twitter to express their outrage.