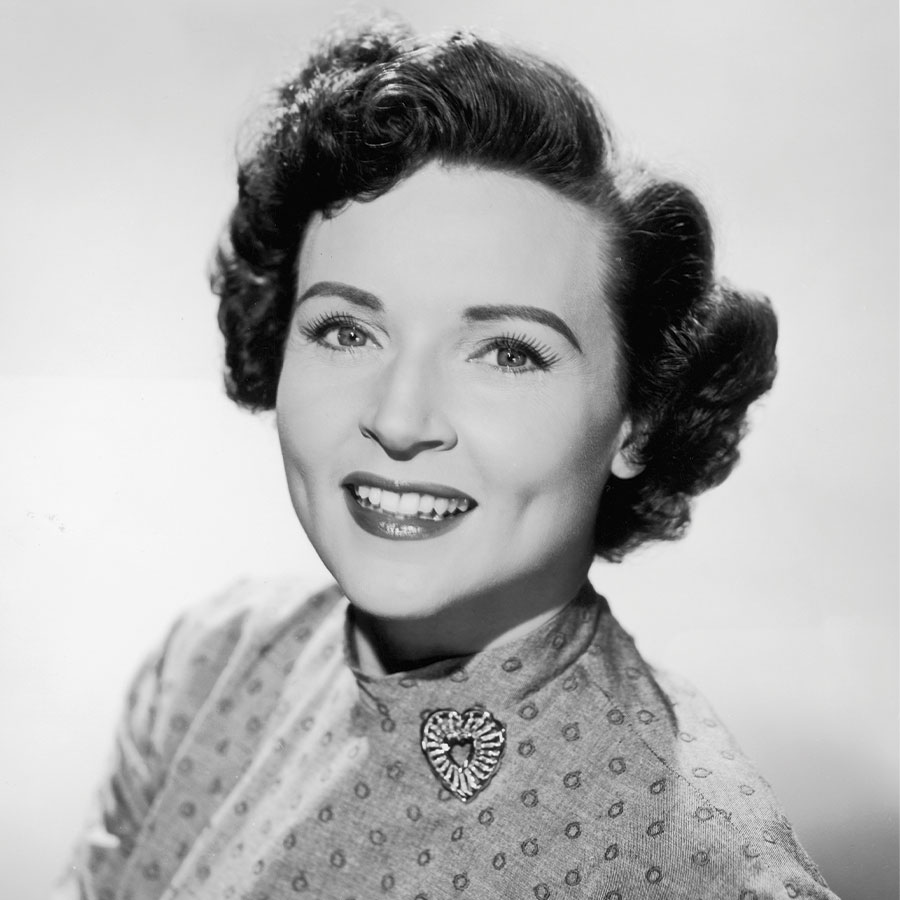 When the universally beloved Hollywood legend Betty White died in her sleep on New Year’s Eve at 99, she was just a few weeks shy of her 100th birthday. To commemorate her centenary, the star-studded movie Betty White: A Celebration will still screen for one-day-only on January 17, which would have been her 100th birthday.

White first appeared on television in 1939 on an experimental broadcast so new that the Federal Communication Commission wouldn’t go on to approve the medium for another two years. Her small screen career later truly kicked off with Life with Elizabeth (short sketches about newlyweds getting into hi-jinx) from 1953-1955 and first revealed the impeccable comedic timing that made White famous in later series’ like The Mary Tyler Moore Show, The Golden Girls and Hot in Cleveland.

The national treasure was modest about her success but, over the course of a career spanning more than eight decades, racked up hundreds of varied screen credits that attest to her incredible range as a comedienne. Here, we recall some of her most memorable big and small screen moments.

The First Lady of Game Shows

Comedy teaches you to think on your feet and that skill made White a sublime game show guest on shows like Match Game, Password, and Password Plus throughout the 1960s and 1970s (and later, her stint hosting Just Men won her the Daytime Emmy in 1983 for Outstanding Game Show). We like this compilation from Buzzr that demonstrates her knack for quips — including with her frequent partner in crime and fellow entertainment legend Lucille Ball.

The first television appearance of Black singer and tap dancer Arthur Duncan (later a longtime performer on The Lawrence Welk Show) was on The Betty White Show in 1954 (watch White introduce his number “Sing You Sinners”). It’s a simple but loaded historical moment: stations in the southern U.S. refused to air the show if it featured a Black performer, but White didn’t back down from having him on as a guest; in the 2018 documentary Betty White: First Lady of Television, Duncan — now 88 — credits her with launching his career.

On the groundbreaking sitcom The Mary Tyler Moore Show, White appeared as two-faced, cheerful, and sex-crazed “happy homemaker” neighbour Sue Ann Nivens beginning in the fourth season. It was intended as a one-off but proved so memorable she became a regular and went on to win two Emmys for her work on the series.

Back in St. Olaf…

As sweet, guileless Rose Nylund on The Golden Girls — who enjoyed regaling her roommates with many absurd-but-true tales of growing up back in St. Olaf, Minnesota — White was often the butt of the sitcom’s jokes. Take Rose’s very first St. Olaf story: in the epic recounting of The Great Herring War, her timing and delivery are so good that her co-stars suppress laughter while many fans continue to mistakenly believe White ad libbed the whole thing (it was apparently scripted and read verbatim). No wonder she won an Emmy and was nominated in each of the following seven years. (If you want to know what true breaking character looks like, try this rare Golden Girls blooper.)

Her character also broached serious topics, like the HIV/AIDS episode at a time when few mainstream outlets dared tackle the subject (Colorado Public Radio has an audio essay about its impact) and White discussed her work as an ally to the queer community on a 2014 episode of Larry King Now.

But the moment that takes the comedy cake is one only a genius like White could pull off: when a mean Sunshine Cadet volunteer wouldn’t give Rose back her beloved childhood teddy bear Fernando (“Old Friends,” 1987) and held him for ransom, she was disconsolate. Rose, however, gets her own back this satisfying scene.

Decades later, the twist is that the cadet was played by a young Jenny Lewis. Now an acclaimed singer-songwriter who opens for Harry Styles, Lewis paid tribute to White last week and previously gave a callback spoof in her “She’s Not Me” video.

White was a regular in Tarzan and Jane sketches with her old pal Johnny Carson and gave good sofa chat throughout her career. She flirted with Jason Momoa (on Conan); shared that vodka is one of her hobbies on The Late Show with David Letterman; prank-called James Corden with some requirements for her appearance rider (including lighting changes, repainting her dressing room prior to her arrival and insisting on there only being yellow M&Ms as snacks) and gamely met people who have tattoos of her face on their body on Jimmy Kimmel.

Even after White’s passing, a clip of her joking around with Joan Rivers in 1983 when the latter served as guest host of The Tonight Show went viral.

But when White stayed up past her bedtime and became the oldest person to host Saturday Night Live in 2010 (and won an Emmy for it), she demonstrated that, after seven decades of live television at that point, she still knew how to work an audience — including simultaneously thanking and dissing Facebook to perfection in her monologue.

Memorable as a guest and in the tiniest of cameo parts, she’s pitch-perfect as Eunice’s infuriatingly accomplished older sister Ellen on Mama’s Family; nimble guest-starring as a version of herself on The Simpsons; and fantastic while joining Troy and Abed in a rap version of Toto’s “Africa,” aka the “White Anthropology Rap,” on Community’s study room couch.

And her reaction to The Village People performing on The Love Boat in 1980 is a real moment; playing alongside real-life husband Allen Ludden (one of her five guest appearances on the popular series); or how she handily usurped heartthrob Zac Efron’s audition of “Let’s Get It On” on The Voice.

One of her final recurring guest roles though was on hit daytime soap The Bold and the Beautiful.

And on Hot in Cleveland, White’s part as the motley crew’s progressive and opinionated landlady Elka was originally intended as a single-episode stint, but she was made regular. And the only thing better than White’s lines is White’s blooper reel.

In the otherwise unremarkable 1999 horror comedy Lake Placid, White plays Mrs. Bickerman, the seemingly innocent widow who secretly feeds live cattle to the lake’s man-eating crocodile without so much as blinking. Her unexpectedly raunchy quip may be the origin of her fifth act potty-mouth punchline revival that led to classics like her profanity-laced review of pal Ryan Reynolds in Deadpool.

White has a gift for the quip and trading barbs (like with frenemy Cloris Leachman in You Again) and in the many variety programs, talk shows and sitcoms that made her a household name. Over the years she’s played dozens of kindly and believably sweet grandmothers (usually with a spine of steel and a penchant for profanity), perhaps most notably to Ryan Reynolds in the rom-com The Proposal, and made mischief on-screen in the hidden-camera senior citizens prank show Betty White’s Off Their Rockers.

As a nosy former neighbour Catherine Piper, White played the nemesis and general thorn in the side of James Spader’s lawyer on both The Practice and its spinoff Boston Legal. In the former, her five-episode story arc was nominated for an Emmy; in the latter, she steals every moment from even scenery-chewing Spader as a prosecution witness.

From The Pet Set to Rap Battles for Animal Welfare

Fifty years ago White produced and hosted a syndicated series in which she tapped celebrity pals like Bob Barker, Lorne Greene, and Della Reese to drop by with their pets (now available as a box set and streaming outlets). Her devotion to animals and animal causes was a lifelong commitment; for example, she filmed this music video-style commercial of Luciana’s “I’m Still Hot” (featuring a boa constrictor she would later adopt) for Lifeline, and the proceeds went to the Los Angeles Zoo.

The Rule of Threes

In the “Stone Mountain” episode of 30 Rock White again plays herself, in a scene sitting quietly at home reading the Jimmy Carter biography From Peanuts to President when she is interrupted with a call from Tracy Jordan. He’s convinced he will be the next in the tabloid trifecta of celebrity deaths so he’s called one of the oldest living stars he knows of to check up on her health. “I haven’t seen you since that rapping grandma we did,” she says. “You were so funny as the rapping grandma.” That is, until she realizes why he’s calling. “Nice try, Jordan—but I am gonna be at your funeral. I will bury you!”

Betty White was always up for anything that might get a laugh. While awarding the VH1 Hip Hop Honors to her friend Queen Latifah, White delivered a deadpan dramatic interpretive reading of a rap song; she played football hangry in a now-famous Super Bowl Snickers commercial (which spawned the Facebook campaign that got her hosting SNL); and she performed a surprise tribute to old friend Morgan Freeman at the AFI Awards, complete with a kick line version of “Hello, Dolly.”

A personal favourite moment? The (fake) feud with Canadian co-star Ryan Reynolds in this Funny or Die footage behind-the-scenes on The Proposal that sends up her “national treasure” persona.