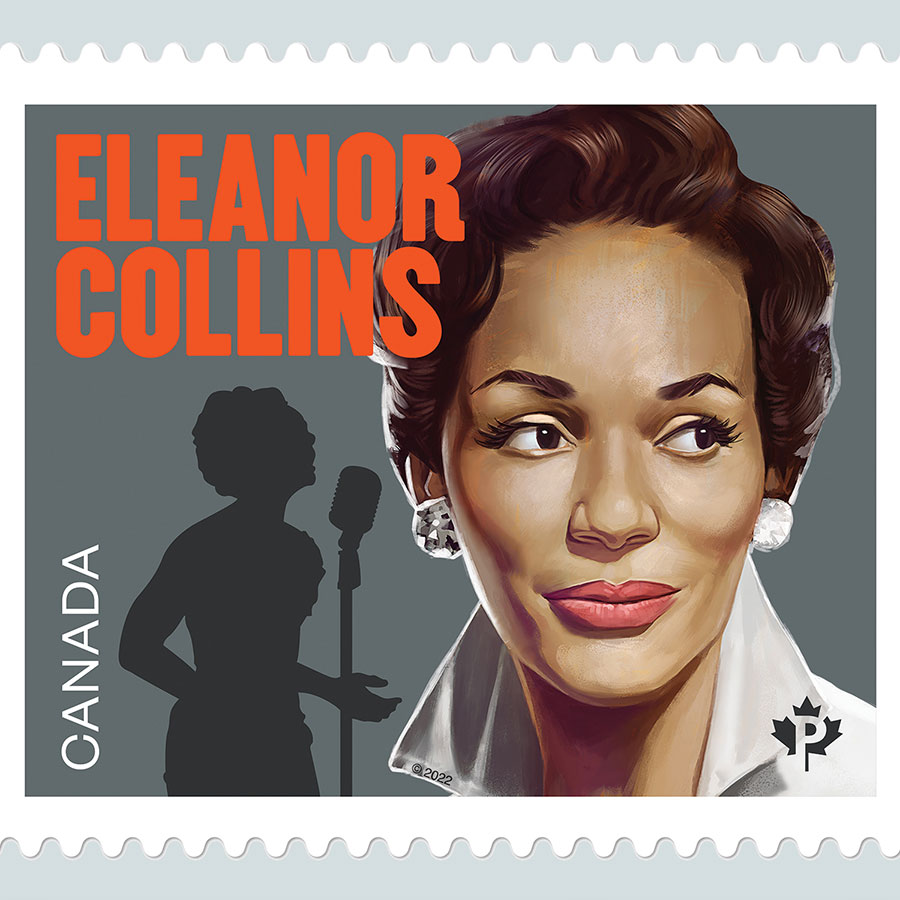 Eleanor Collins, the 102-year-old singer known as Canada's "first lady of jazz," said it was "surreal" to be featured on a new Canada Post stamp, which was unveiled at a virtual event on Friday. Photo: Courtesy of Canada Post

Eleanor Collins, the trailblazing singer and actor known as Canada’s first lady of jazz, was honoured with a commemorative Canada Post stamp on Friday.

A virtual unveiling of the new stamp featured tributes from colleagues and others influenced by her work as well as a pre-recorded interview with Collins, who spoke with Canada Post after celebrating her 102nd birthday in November.

“I feel wonderful and honoured,” she said in the interview. “You know, at 102 years old one doesn’t even expect to be remembered, but, I am grateful.”

“To really have someone affirm your work and life, on a postage stamp?! Oo!” she exclaimed. “That is something.

“There’s only one word for that — that is surreal.”

The new stamp features a stunning illustration of Collins in the foreground along with a silhouette of her performing in the background.

Joining the virtual event was Nalda Callender of the National Congress of Black Women Foundation; filmmaker Sylvia Hamilton; and musicians who performed with Collins throughout her career, including Sharman King and Marcus Mosely.

“You never cease to amaze us with your quality and success,” said Callender in a tribute to the singer during the event. “You are such an inspiration. You have worked hard for this moment and we couldn’t be more proud of you.”

“I think we in Canada need to know Eleanor Collins because she is in that first lineup,” she said.

“It has been a great honour in my life to have known you, shared the stage with you and to have had the opportunity to learn from one of the best,” Mosely said of Collins.

The musician also reminisced about a memorable performance Collins put on at his “Stayed On Freedom” concert, which included a surprising song choice.

“She decided to sing ‘It’s Not Easy Being Green,’ the song from The Muppets,” he recalled with a laugh. “In a Black History concert, who would have thought of that.”

“She always conveyed a belief in the good of people, so when I listen to her to this day, that warmth and belief in people is palpable,” King said of Collins.

Collins also gave a shout out to her colleagues and friends who acknowledged her ahead of the stamp’s unveiling.

“I’m grateful for each and every one of you who have been a part of this very long journey of mine.”

Eleanor Collins began her professional career in Vancouver in the 1930s, but performing was part of her life long before she stepped on a stage.

During family gatherings she and her cousins would often put on a concert-like performance, where each member was assigned a key and a vocal harmony.

“I realize now that these gatherings were really the genesis of my musical training,” Collins told Canada Post Magazine. “If you muddled your part, a real chastising followed. Fortunately, I guess I was born with what is called a musical ear that always allowed me to hear the right notes.”

The Edmonton native caught her first major break in 1940, singing on CBC Radio with the gospel group Swing Low Quartet. The gig was the start of a long relationship with the broadcaster, who featured her on a variety of radio programs, including Serenade in Rhythm, which was broadcast to troops overseas.

Her music career saw her work with other jazz greats, including Dizzy Gillespie and Oscar Peterson.

After branching into acting in a number of theatre productions, Collins made her television debut in 1954 on CBC’s Bamboula: A Day in the West Indies, where she was part of the first interracial cast in Canadian television. She would make history again a year later when she starred in The Eleanor Show, becoming the first woman and first Black artist to headline their own national television series.

On her 95th birthday in 2014, Collins was invested into the Order of Canada.

The citation for the honour recognized her as a “talented vocalist who changed the face of race relations in mid-20th century Vancouver.”

In addition to her firsts in television, Collins and her family became the first Black family to move into suburban Burnaby, just west of Vancouver, where they faced down extreme prejudice. Despite an unsuccessful petition aimed at preventing them from moving in, Collins entrenched herself in the community, volunteering at the local school and teaching music to Girl Guides.

“The hostilities, name calling, bullying and barriers came as no surprise,” she said of their initial welcome to the neighbourhood. “I knew that we had to develop a strategy to help create a climate in which our children could live without harassment. For me it was about increasing my visibility in the community so people could get to know me.

“Eventually, as they grew to know us as contributing members of the community, our house became one of the central social gathering spots for all the children. It was my hope that I could help bridge the perceived differences that divide people instead of unite,” said Collins.

The new stamp is now available for online order from Canada Post.

“Send It To Me”: The Rolling Stones Honoured With Royal Mail Stamps Ahead of 60th Anniversary