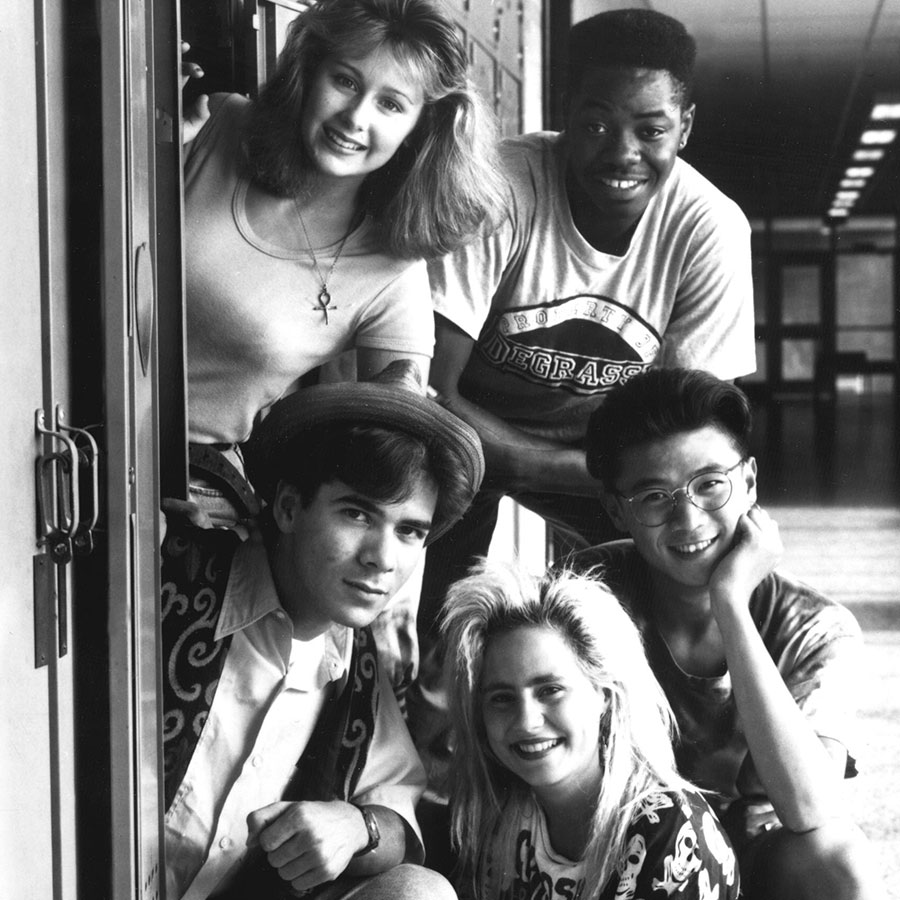 Cast members from the 'Degrassi High' series, clockwise from top left: Stacie Mistysyn, Dayo Ade, Siluck Saysanasy, Amanda Stepto and Pat Mastroianni. This incarnation of the Degrassi franchise ran from 1989-1991 as a sequel to the 'Degrassi Junior High' series, which featured many of the same stars. Photo: Everett Collection / Canadian Press

While TV shows come and go, there are storied TV franchises that simply stand the test of time. Star Trek boldly blasted off 56 years ago, spawning movie spin-offs and a dozen sequels, while Law & Order has forged its way into a fourth decade.

In Canada, the franchise with the longest legs is Degrassi, which originally launched in 1979 and has endured in various iterations for generations.

And that streak will continue with the recent announcement of a new “next generation” of Degrassi from HBO Max that’s set to debut in 2023. Ten hour-long episodes have been ordered and HBO Max says they will continue to present diverse characters in telling a story about teenagers and faculty, “often on a painful journey of self-discovery.”

The new episodes will begin production in Toronto this coming summer.

The US streaming service has also secured rights for all 14 seasons of Degrassi: The Next Generation, which will start streaming this spring (with Crave the likely streaming destination in Canada).

Next Generation was the CTV version of the series, which ran from 2001 to 2015. It is heralded today as a training ground for many young Canadian actors, writers and directors. Drake (then billed as Aubrey Drake Graham), Nina Dobrev and Shenae Grimes were among those who took the Degrassi express ramp to future success.

Where It All Began…

Originally created by Kit Hood and Linda Schuyler under their “Playing With Time” banner, the series has gone through several ownership changes in recent years. The new franchise owner, WildBrain, has handed the keys to writers Lara Azzopardi (Mary Kills People) and Julia Cohen (A Million Little Things) — who both boast roots in Toronto — as executive producers.

Degrassi began on CBC as a humble series of after school specials known collectively as The Kids of Degrassi (1979-1986). Not long after, young characters such as “Wheels” (the late Neil Hope) and “Snake” (Stefan Brogren) became as well known and popular on Canadian TV as Don Cherry or Mr. Dressup. As the series morphed into Degrassi Junior High (1987-1989), another young player, Pat Mastroianni (Joey), won the Best Actor prize at the 1988 Gemini Awards.

Degrassi High, a sequel to Degrassi Junior High, aired for two seasons from 1989-1991, followed by Next Generation and then Degrassi: Next Class, which incorporated some characters from its direct predecessor series, for four seasons between 2016-2019.

The original focus of the series was on a group of preadolescents who went to school near Degrassi Street in downtown Toronto. TVO’s Saturday Night at the Movie’s host Elwy Yost appeared in the first episode to award a student filmmaker a prize.

As the series grew along with its cast, it began dealing more frankly with social and cultural issues. These were not the predominantly white, almost 30-ish cast of beautiful high school students living in the 90210 zip code, with perfect hair and complexions. As the age appropriate Degrassi cast became more diverse, reflecting both ethnic and economical realities, adolescent viewers could directly relate to these authentic kids and challenges.

The series broke many barriers during its run. Degrassi Junior High concluded in 1992 with a post-graduation TV-movie titled, “School’s Out.” The first F-bomb in Canadian scripted television history was uttered on that CBC finale. A major storyline on Next Generation involved a transgender student played by Jordan Todosey (Life With Derek). At the time, in 2011, the advocacy group GLAAD singled out the student as the “only transgender regular or recurring character on scripted television.”

Exported across the United States, first on PBS and later on the cable channel Teen Nick, the series occasionally veered too close to reality for American programmers. When the series dealt with abortion — once on the CBC episodes and once on CTV’s Next Generation — those episodes never aired in the U.S.

At one point, Degrassi was licensed in close to 150 different countries and regions, including Botswana, Saudi Arabia, Uzbekistan, Yemen, North and South Korea and Vatican City. It eventually got even wider exposure on Netflix.

Fans around the world included American director Kevin Smith. He even appeared with his movie co-star pal Jason Mewes in the spin-off movie Degrassi Goes Hollywood.

So how will the new series fit with today’s TV scene? Certainly Degrassi has always been ahead of the curve when it comes to openness and diversity. It is possible that it could veer into even more adventurous territory given the popularity of shows like Euphoria, with its edgy and often unfiltered look at Gen Z high school life.

Keep in mind, however, that the series has been re-ordered under the WarnerMedia Kids and Family brand, and that the plan is to also make the new episodes available on Warner’s Cartoon Network. A Riverdale-like re-imagining might be closer to what viewers can expect.

With the original kids of Degrassi now in their fifties, there is no word if any of the former cast members will take part in the new edition. Brogren, whose Degrassi days started in the ’80s with Degrassi Junior High, went from playing “Snake” to becoming principal of the high school during Next Generation and later became a director on the series.

Interviewed on the Toronto set back in those CTV days, he admitted he never imagined he would ever turn a child actor job into a full-time adult career. After Degrassi Junior High/Degrassi High finished their runs on CBC, the lanky blond-haired actor went away to school, figuring “the show would fade away and no one would know who I am.”

Instead, the number of next generations of Degrassi seem as limitless as there are Star Trek spinoffs.

May it continue to go forth and prosper.