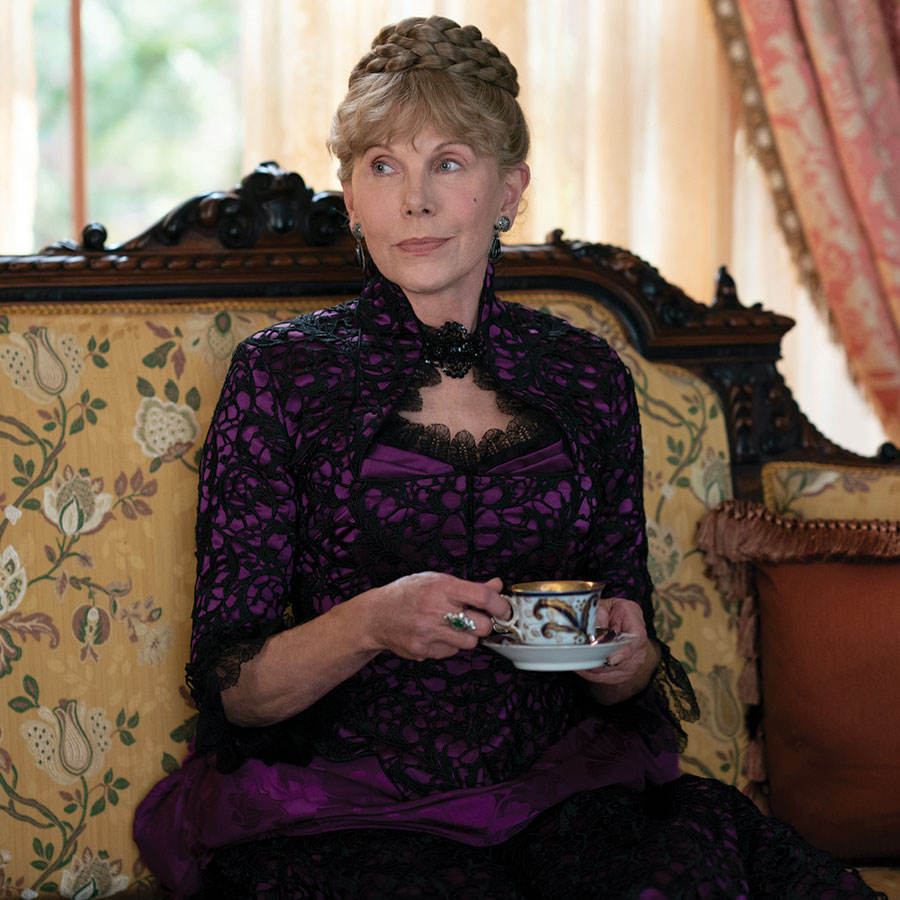 Twenty years ago, Julian Fellowes co-wrote the Academy Award-winning screenplay for Gosford Park, an acerbic masterpiece about a weekend shooting party. The star-studded ensemble was Upstairs, Downstairs meets Agatha Christie murder mystery. It cast an unsentimental eye on the tensions above and below stairs, then coated it all in an acid critique of the fading British aristocracy. The movie launched his career as popular entertainment’s foremost chronicler of bygone high society, and his 2004 international bestseller Snobs cemented it, skewering the social nuances of the present-day upper classes by following the perspective of a young middle-class woman who marries into them.

As we know, Fellowes went on to create the hit series and movie Downton Abbey, with the latest instalment — Downton Abbey: A New Era — expected in theatres on March 18. The British period piece swept audiences up in a lavishly rendered inheritance drama about several generations of the aristocratic Crawley family and their servants at a grand country estate, unfolding in a rapidly changing and modernizing England between 1912-1926. Similarly, his later novel, Belgravia (adapted into a 2020 miniseries), examined the generational discord and class conflict between developers and the merchant class ascending to the aristocracy during the London real estate boom of the 1840s.

His new TV series, The Gilded Age (which premiered on Crave Jan. 24), explores many of the same themes, but this time, it’s set in New York in 1882, where the interaction of old and new money is about to transform America. “The newcomers redesigned being rich,” is how Fellowes described his fascination with the era — named for the explosive period of economic growth — when the series was announced. “They created a rich culture that we still have — people who are rich today are generally rich in a way that was established in America in the 1880s, ’90s, 1900s.”

The series begins when headstrong but naïve Marion (Louisa Jacobson) moves to New York to live at a well-appointed brownstone mansion with her aunts Ada (Cynthia Nixon) and Agnes Van Rhijn (Christine Baranski). Meek spinster Ada becomes a sympathetic confidante to their young charge, while the widowed and well-to-do Agnes, who is a member of the wealthy old guard – and delivers withering put-downs to rival Maggie Smith’s Violet Crawley in Downton – requires compliance with the strict conservative etiquette that gave the early Gilded Age its social hierarchy. It’s as structured as the corsets the women wear.

They’re hallowed names now, but in the post-Civil War boom, an ambitious entrepreneur of relatively recent wealth, such as shipping and railway tycoon Cornelius “Commodore” Vanderbilt, was considered crass compared with the well-entrenched Astor family. Pedigree mattered to socialites like Agnes, who traced their lineage back to the Knickerbockers, the original aristocratic English and Dutch settlers of New York. To this old guard, the self-made people were vulgarians. Naturally, Agnes reviles garish neighbours George (Morgan Spector) and Bertha Russell (Carrie Coon) and their new money, who build an ostentatious mansion across the street. Repeatedly snubbed by the closed circles of New York’s uppermost crust, the series follows the wildly rich couple’s schemes to ensure their daughter marries into the right social set.

Fellowes’ productions are always heavy on period details, because the lifestyle trappings underline the cultural moment. Which silverware to lay and what goblet to use, or whether it’s appropriate to serve soup at lunch, has consequences. In this case, they’re also the plot of The Gilded Age, a show explicitly about “trial by hospitality,” as one husband drily observes.

“Wall Street made the money and Fifth Avenue spent it,” says Cecelia Tichi, the American author of Gilded Age Cocktails, as well as an absorbing history of the era’s complex social etiquette called What Would Mrs. Astor Do? By Fifth Avenue, she means the households and the wives who run them. During the Gilded Age, they expressed their social position through the complementary – and highly competitive – pursuits of architecture and entertaining. Accordingly, the main power struggles take place in the opulent ballrooms, drawing rooms and grand salons of their lavish estates. There, they displayed their wealth and taste in elaborately decorated interiors and through menus they served guests, as well as the gowns they wore to receive them. By the mid- to late-1890s, it was up to five or six changes of clothing per day for the Astor set, Tichi explains by phone from Nashville, Tenn., where she is also research professor of English and American Studies at Vanderbilt University. “Including the men! Hours were spent in these outfit change transitions.”

Who’s Who, Old and New

The 1882 setting is a canny choice, because it’s a transformative cultural moment in the Gilded Age, when nouveau riche families like the Vanderbilts were on the cusp of being accepted (reluctantly) into the fold. “The 1880s are rambunctious, where new money is bumping against old money,” says Tichi.

This is where the social register of Caroline Astor (Donna Murphy) comes in, because the wife of William Astor — grandson of the original tycoon, John Jacob Astor — features prominently in Fellowes’ series. The third Monday in January belonged to her annual winter ball, a standing social event that Vogue editor Anna Wintour gave a tip of the hat to when she dubbed the similarly elite Met Gala “The First Monday in May.” Astor’s ballroom could only accommodate 400 guests, so those who didn’t get an invite feigned travel or illness rather than admit they didn’t make the cut. The real-life socialite, who had a gossipy lieutenant, Ward McAllister (played to the hilt by Nathan Lane in the series), appointed herself queen bee and social arbiter, much like Truman Capote did a century later with his society Swans.

The Russells are a fictional composite, but Stanford White (John Sanders), the exciting young architect they hire to build their French-style château, is not. White’s urban palaces came to dominate the Gilded Age through commissions for the Vanderbilt, Whitney and Pulitzer families, along the stretch of Fifth Avenue known as Millionaire’s Row. Some mansions were styled to resemble Italian Renaissance palaces, inside and out. Newport, R.I., became the playground for the wealthy, who built sprawling McMansions like the Vanderbilts’ The Breakers, but called them summer cottages.

Etiquette guides that proliferated at the time catered both to the expanding middle class and upper-class people like the Russells, who were bewildered by the social code.

Families like the Astors, who made their fortunes a generation or two before and passed on their wealth, considered themselves the best of New York “in comportment, in lineage, in judgment, in knowledge and in taste,” says Tichi.

Etiquette could signal sophistication or betray one’s upbringing. In Downton Abbey, we have the wonderful butler, Carson, who loyally maintained the high standards of hospitality. The Gilded Age gives us two loyal butlers who befit rival households, one who favours the brash new American way, while the other, an Englishman, favours the classical style. The write stuff, or penmanship, is also how Peggy (Denée Benton), the young Black woman who is Marion’s travel companion, lands a job as a secretary in Agnes’s household. “Knowing [how] to recite Longfellow or having beautiful penmanship were markers,” Tichi adds. “They were signifiers of character — of worthiness as a person.”

When the socially ambitious Mrs. Russell decides to give a drop-in house tour with casual buffet called an At Home, the food prepared by her French chef is an eye-popping banquet of delicacies that put Mrs. Patmore’s salmon mousse, chicken vol-au-vents and floating island desserts to shame. Notably, silver platters are piled high with glistening whole lobster, after it was dismissed for decades as lower-class and prison fare. The nouveau riche fetish for all things French – including cuisine – elevated the crustacean to an upper-class staple.

Through patents for refrigeration systems, previously perishable goods that were luxury items, like fresh beef and citrus fruit, abounded. The ready availability of fresh lemons created the Knickerbocker, for example: a classic summer cocktail that combines citrus juice, rum and raspberry. Downton Abbey was all about claret before dinner and, later, Jazz Age gin cocktails, but the early Gilded Age favoured brown spirits like rye (the base of the Commodore, created and named for Cornelius Vanderbilt) and, for men, the Old Fashioned cocktail was king. Although respectable women still drank Champagne, the Gilded Age spawned the first celebrity bartender, Jerry Thomas, who wrote the first English-language books to contain cocktail recipes.

Fashion could affect upward (or downward) mobility: The details of bustles and taffeta couture gowns laden with lace and trimmings by Charles Frederick Worth (for evening functions, often sewn with real gemstones) were faithfully reported, too. In Downton Abbey, tiaras and jewels were family heirlooms, but the Gilded Age went for unapologetic displays of wealth through custom jewelry creations by Cartier and Tiffany & Co., with competitions for the largest precious stones.

Downton Abbey’s rural aristocracy was posh, but the Crawleys are paupers compared to the Gilded Age’s unbridled self-indulgence. There was no federal income tax, and the Astors alone controlled nearly 10 per cent of the country’s wealth, while the urban poor starved.

Vogue magazine, the society fashion bible, did not launch until a decade later, in 1892. In the meantime, the penny press revolutionized newspaper production and made periodicals with gossip, fashion and entertaining advice widely available to the masses. With adjectival glee, society scribes breathlessly shared menus of magnificent dinner parties and reported on party guests. Publicity in the social columns only encouraged more one-upmanship. Nothing was too outlandish in the quest to outdo one another through fancy-dress party themes and novelty dining concepts. One robber baron, for example, hosted a black-tie supper in Sherry’s restaurant where 36 guests dined on horseback — for all seven courses.

Fellowes’ melodrama takes place against a turbulent backdrop of labour strikes, racism against African Americans, and challenges to accepted heterosexual norms. The nearby slums spurred shrewd old-money society hostesses to pursue status-enhancing charitable works, and the exclusion of the newly rich from buying boxes at the downtown Academy of Music incites the arrivistes to build the Metropolitan Opera House uptown the next year.

Fellowes is himself now a peer in the British House of Lords, but his preoccupation with privilege remains the same, although his sympathies seem to align more with the upper classes he once maligned. His melodramas concern the haves and the have-nots, and the accidents of fortune and circumstance that often divide them, gloriously populated by imperious dowagers who uphold tradition and face off against the progressive upstarts who attempt to force change. From the afternoon teas to the midnight banquets, we get to enjoy the spoils.

A version this article appeared in the Feb/March 2022 issue with the headline “High Society,” p. 88.

‘Downton Abbey: A New Era’: The Dowager Countess Reveals Her ‘Mysterious Past’ in Extended Teaser Trailer