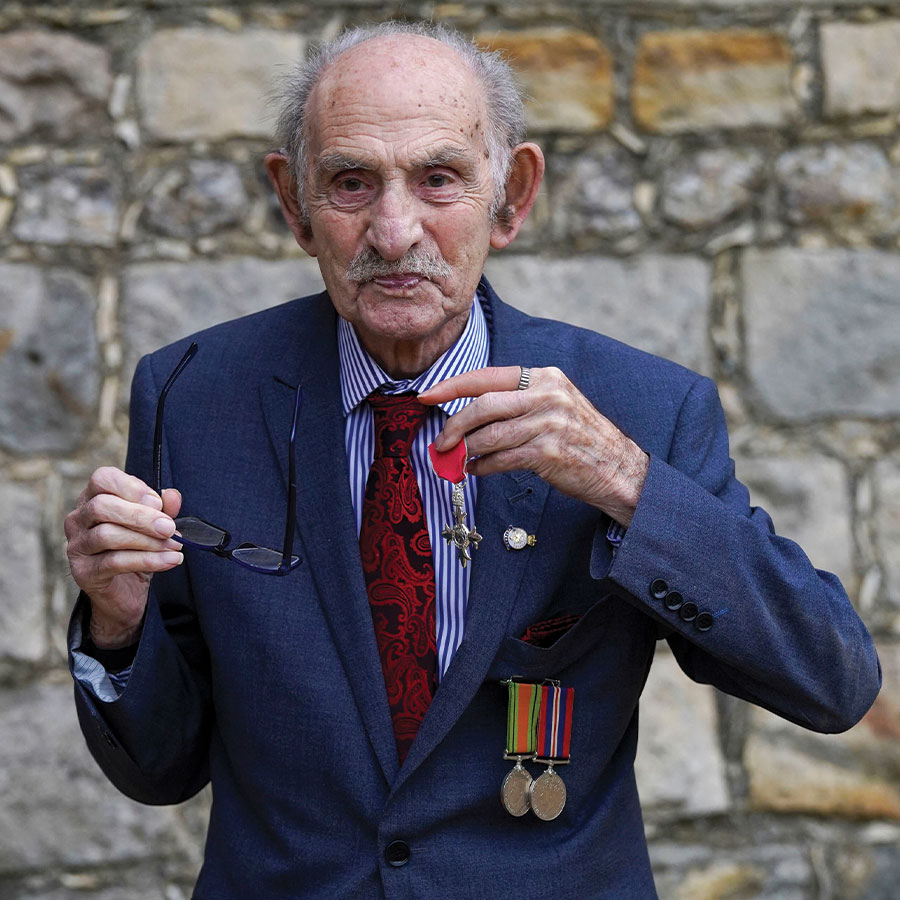 Henry Lewis, honorary vice-president of The Magic Circle, poses with his medal after being appointed a Member of the Order of the British Empire (MBE) at an investiture ceremony at Windsor Castle on Tuesday. Photo: Steve Parsons/POOL/AFP/Getty Images

A centenarian who used his love of magic to raise funds for charitable foundations throughout his life was invested as a Member of the Order of the British Empire (MBE) by Prince William during a ceremony at Windsor Castle on Tuesday.

Henry Lewis, 102, who serves as the honorary vice-president of The Magic Circle (the world’s most famous magic society) said he was “very pleased” about the honour, which was awarded for his services to fundraising and charitable causes.

“I’m very surprised I ever got it,” he told the PA news agency after receiving the honour from the prince.

“Magic was a hobby of mine, it’s never been my profession, but it’s raised a lot of money all over the world.”

“If you are able to do things for other people which they cannot do themselves, that’s an advantage to you as well,” he added of his charity work.

Despite never calling it his profession, Lewis wasn’t lacking any confidence as he delighted his royal audience with a quick magic demonstration.

“I don’t do tricks, I do magic,” he says cheekily in a video of the performance included in a congratulatory tweet from the Duke and Duchess of Cambridge.

Lewis then fastens a safety pin to a white cloth and pulls it from one side to the other without ripping the fabric.

“The best part of magic is that people enjoy it,” he told the PA news agency.

The hobby, which he happened upon (quite literally) when he discovered a magic book in a pile of garbage in Hackney, East London, as a child, has seen him travel all over the world.

“I performed in Canada. I performed in Denmark; Israel; in Massachusetts in two very large theatres,” he said. “So I’ve had a very, very good life compared to most and I’ve done a lot in it.”

His honorary position in The Magic Circle is well deserved.

“He has helped the society in so many ways over the years,” a congratulatory post on the The Magic Circle’s website reads.

As a member of the Incorporated Society of Valuers and Auctioneers, he’s put on fundraising auctions for the society and served as executive curator for their museum.

And in 1998, he gave The Magic Circle a £100,000 interest-free loan to help fund their headquarters, located in Euston, London.

It was during one of his performances at those same headquarters that Lewis had his first brush with the Royal Family in a meeting with the Prince of Wales.

Keeping his skills sharp, the 102-year-old still performs on occasion. Recently he put on a show at his long-term care home in North London in front of a tough crowd of his fellow residents.

“They complained about it. It was too short,” he joked.

As for the secrets to his longevity, the charitable magician was happy to share a few tricks for living a long and happy life.

“When you go to bed at night think of what you’ll be doing the next day and when you wake up, do it,” he said.

“And never be jealous or envious of other people or their possessions. If you’re like that, you’ll be happy.”