“Fragments of Epic Memory”: Exploring the Dichotomy Between Colonialism and Caribbean Culture Through Art 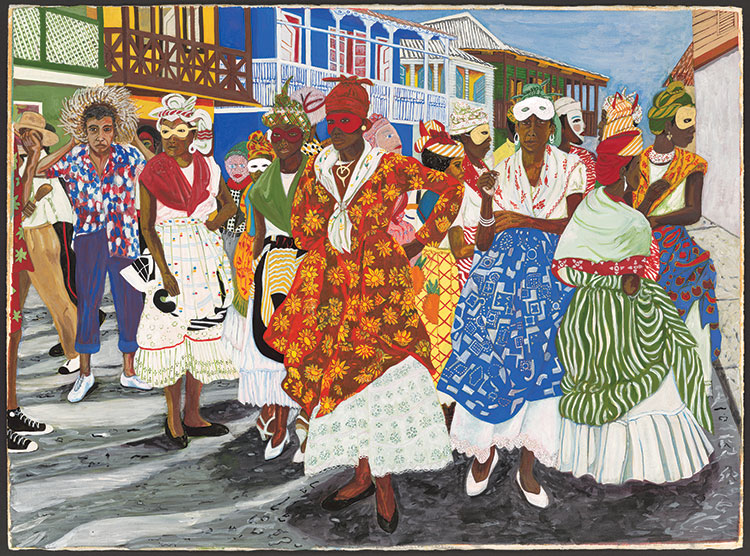 As I walked towards Gomo George’s 1996 painting “Women’s Carnival Group” (above) at the Art Gallery of Ontario last fall, I felt a visceral shock of recognition.  I had not seen my late grandmother’s house on Lower King George V Street in Roseau, Dominica, for years, and suddenly I was staring at it. The artist had faithfully rendered her block and its elegant balconies, one of which I stood on as a little girl, looking down on the very scene he had painted: women “playing  mas,” resplendent in their Wob Dwiyéts, the island’s national dress. In my 20s, I had commissioned my own Wob Dwiyét, and as I stood there, I remembered that I had never worn it. I thought of my aunts, who often wore theirs. I felt a longing for my Creole identity, a heritage I have never managed to fully inhabit.

The artwork was part of the “Fragments of Epic Memory” exhibition from the AGO’s new department of Arts of Global Africa and the Diaspora and its curator, Julie Crooks. On until Feb. 21, it is built around the Montgomery Collection of Caribbean Photographs, a post-slavery historical record of the region’s peoples, acquired in 2019. Crooks told me she conceived the show so that contemporary and modern paintings, sculptures and video are “in dialogue” with the photographs, which then “contextualize and re-imagine” the stories they reveal.

George’s piece was doubly arresting to me because of the photo-realistic style: It was a painting of a 1958 photograph by K.A. Richards, a Dominican, like him. “I was intrigued by the relationship between photography and painting,” Crooks explains. One medium informs the other, adding an extra layer to “the suspension of time. A photo taken in the ’50s and being recreated in the ’90s is an extension of the memory.” The exhibition is a statement about the dichotomy between the trauma of colonialism and the richness of the Caribbean culture. The struggle to reconcile this dissonance is of profound familiarity to the diaspora.

“The show was organized during a time of Black Lives Matter,” says Crooks, who describes working at her kitchen table with the George Floyd protests on TV as she gathered art “that would have resonance in this time, which highlighted precarity around social justice and race that continues post, post-emancipation.”

The exhibition’s name is taken from a Nobel Lecture, “The Antilles: Fragments of Epic Memory,” delivered by the late St. Lucian poet and playwright Sir Derek Walcott after he won the prize for literature in 1992. Crooks says she chose the title because, in the lecture, “Walcott uses the metaphor of the shards of a shattered vase to signify the numerous silenced and unknown stories and histories of the Caribbean. He refers to these anonymous stories as ‘fragments of epic memory.’ I think this show is symbolic of this notion.”

One of its passages is reproduced in the exhibit: “A century looked at a landscape furious with vegetation in the wrong light and with the wrong eye. It is such pictures that are saddening rather than the tropics itself.”

We would do well to remember Walcott’s words as we post artfully arranged Caribbean holiday snaps without a thought or care for the local people and their history. In our December 2021/January 2022 issue of Zoomer, our “22 Reasons to Travel in 2022” reflect a turning tide in the tourism industry, with companies and travellers waking up to their impact on local environments, economies and communities. This social responsibility is even more acute following the pandemic, which punished tourism-dependent countries.

As you contemplate your next trip, consider your impact on the planet and its people, and ensure your tourism dollars do some good. As Walcott said: “What is the earthly paradise for our visitors? Two weeks without rain and a mahogany tan, and, at sunset, local troubadours in straw hats and floral shirts beating ‘Yellow Bird’ and ‘Banana Boat Song’ to death. There is a territory wider than this — wider than the limits made by the map of an island — which is the illimitable sea and what it remembers.”

A version of this story appeared in the December 2021/January 2022 issue of Zoomer magazine on the “From the Editor-in-Chief & Publisher” page.