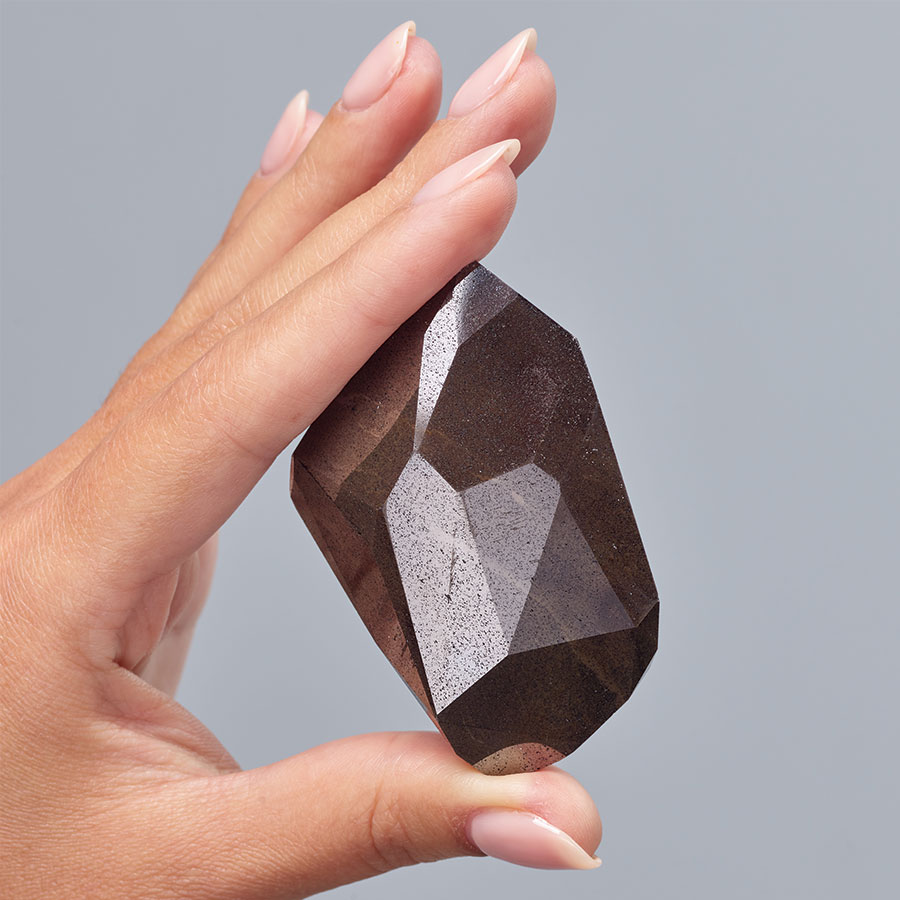 The Enigma (pictured above) is heralded as “a treasure from interstellar space”. Photo: Courtesy of Sotheby's

Talk about galactic glamour. Heralded as “a treasure from interstellar space,” Sotheby’s sells The Enigma, an enormous, ​extremely rare black diamond, for  $5.4 million.

Star of a single-lot sale, the 555.55-carat stone is the world’s largest cut diamond and the biggest faceted diamond to ever appear at auction.  Or, as Sotheby’s frames it with no small hyperbole: “A once-in-a-lifetime opportunity to acquire one of the rarest wonders known to humankind.”

Also known as ​​carbonados, these elegant black stones are billions of years old and found only in Central Africa and Brazil​. Reaching further afield, Sotheby’s claims The Enigma may even be ​the result of meteoric impacts​ or supernovae explosions that blasted “diamond-rich asteroids” into the Earth.

The Enigma was cut into 55 facets in a nod to the Middle Eastern Hamsa symbol. The hand-shaped talisman associated with the number five that Arabic cultures see as a sign of protection that wards off the evil eye. In fact, jewelry houses often cut stones into facets that reflect the auspicious numbers of wealthier markets. The Chinese consider eight the luckiest number, so you’ll find gems cut into 88 facets for ​that country’s billionaire buyers. In the end it went to entrepreneur Richard Heart, who purchased the rock as a publicity move and renamed it, rather lamentably, “the HEX.com diamond” in reference to the blockchain platform he founded.

When Richard Burton gifted jewelry fanatic Elizabeth Taylor with a million-dollar diamond in 1969, she found the 68-carat ring too heavy to wear and had it reset as a choker; the massive diamond positioned to mask her tracheotomy scar. Named after the famous lovers, the actress would sell the Taylor-Burton Diamond for a tidy profit after the pair’s second divorce. Using part of the US$3-to 5-million-dollar proceeds to fund a hospital in Botswana — where the two had been remarried.