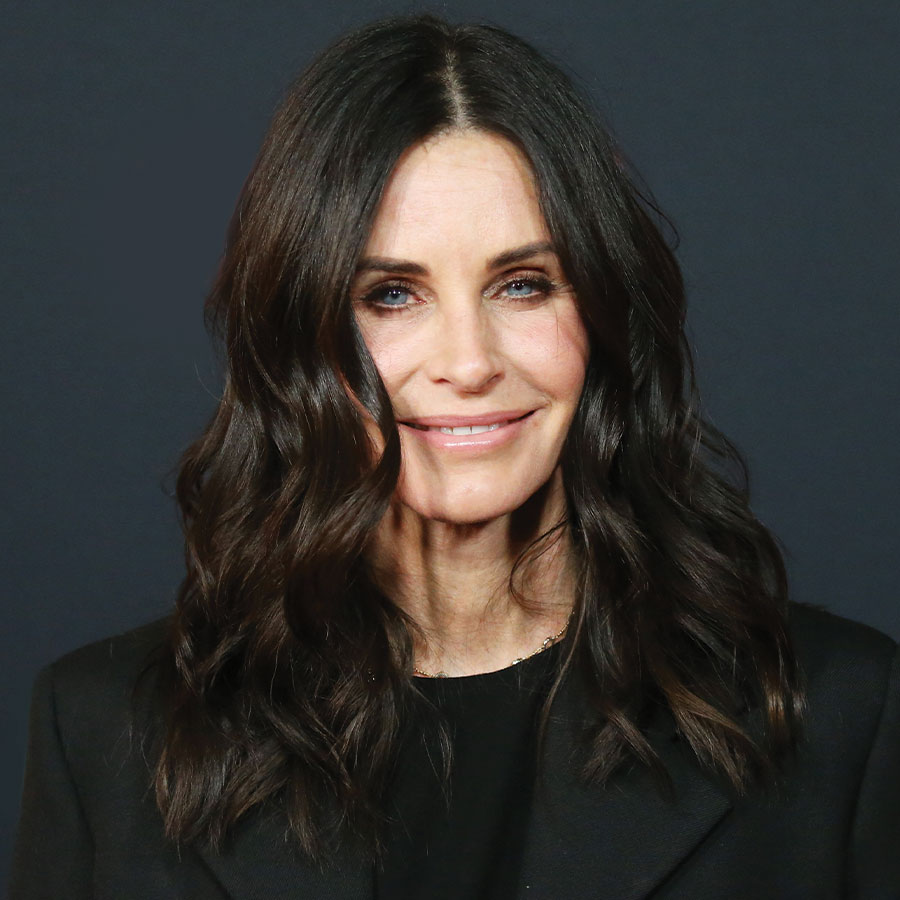 “There was a time when you go, ‘Oh, I’m changing. I’m looking older.’ And I tried to chase that [youthfulness] for years.” These are the words of Courteney Cox, 57, best known for her role as Monica Geller on Friends.

Monica was a tad obsessive, so one might wonder if that character trait was actually something Cox personally brought to the table. And, she gets very personal about her journey post-Friends, in the U.K.’s Sunday Times Style magazine cover story, out in early March. She’s promoting her new TV show, a haunted house tale called Shining Vale. Greg Kinnear has been cast as her husband, and he’s 58.

And, yet, in 2010, Cox starred in another TV show, this one called Cougar Town. In our pop vernacular, the term “cougar,” is applied to older women who are interested in men much younger than they are. Or was. It seems simply outdated now. When reporters were invited to a set visit with some of the principles of the show, Cox was asked if she’d have done anything differently while filming Friends.

“The one thing that I wished I hadn’t been back in those days, which I’ve changed, is [that] I’m not a competitive person at all, but I am a comparative person,” Popsugar.com reported her as saying. “I don’t want to compare anymore. There’s a lot of stuff that can mess with your ego, being on a show with six people in an ensemble like that … It’s hard. I wish I hadn’t ever spent time comparing.”

That was more than a decade ago. But can you blame her? The Hollywood machine continues its obsession with youth, unless you’re Jennifer Lopez starring in a RomCom in your 50s, in which you’re a pop star of an undetermined age set to marry another pop star, who just happens to be played by a helluva lot younger man (spoiler: she ends up going for the much more age-appropriate guy, played by 53-year-old Owen Wilson). In real life, Cox is also dating a man of a younger age, musician Johnny McDaid, who is 45.

So why does it feel like the rest of us have moved past that? Rita Moreno, at 90, shows us what true grace and glamour looks like. She’s on the cover of the latest issue of Town & Country magazine and is also nominated for an Oscar for supporting actress in West Side Story. Age over beauty? We think not. A picture is worth a thousand words. Moreno, arguably the JLo of her day, shows us she still is — incandescent, fierce, beautiful, powerful. She owns her age.

Perhaps that’s what it’s all about. Owning it. Whatever that may be. Earlier this month, and as reported by this website, supermodel Linda Evangelista revealed her own pain, a disastrous fat-melting procedure that went sideways. In a cover story for People magazine, Evangelista expressed her regret. “Why do we feel the need to do these things [to our bodies]?” she said. “I always knew I would age. And I know that there are things a body goes through.” In her defence, just like Cox, the pressures of maintaining youthful beauty may also come with grave physical and psychological effects — especially when trying to make changes that sometimes go wrong. “I don’t recognize myself physically,” Evangelista said in the story, “but I don’t recognize me as a person any longer either.”

In the Sunday Times story, Cox, too, owned up to her regret “doing stuff” to her face. If you’re a follower of Cox on Instagram, you’ve probably noticed her near-compulsive love of cleaning — she’s even launched a line of cleaning products. But, maybe what the actor obsessed with most, was her appearance.

Cox is admitting to an overuse of injectables, such as fillers, and Botox, telling the Sunday Times it made her look “really strange.” For many years post-Friends, there had been commentary on the actor’s weight, being labelled anorexic or just plain way too thin. And it was Cox that admitted, at the time, she liked herself at what appeared to be very slim. “I like myself at this weight … I don’t have an eating disorder.” She also said that she didn’t want to “feel responsible for anorexia across this country.”

Post-Friends, during the Cougar Town era, Cox may have chosen her butt over her face, and why not? With all the tech tools available, we can fix our faces more easily than our butts. “… To get your bottom half to be the right size, your face might have to be a little gaunt.” She topped off that quote with the clincher: “You choose your battles.” Her weapon of choice? The Botox and injectables she talks about in the Sunday Times piece. But, like with anything, too much of a good thing is, well, just too much. “Oh shit, I’m actually looking really strange with injections and doing stuff to my face that I would never do now,” she said in the story.

Time to stop. Her friends were talking about her. And her appearance. “That’s crazy.” In 2017, she had all the facial filler dissolved. She recognized that she no longer looked like herself. In 2019, Cox told People magazine that she was ready to embrace who she is, acknowledge that she’s getting older and appreciate “what God gave me, not what I was trying to change.”

But can the Hollywood machine really change? In a bizarre twist of déja vu, Emmy Rossum, 35, has just been cast to play 25-year-old Tom Holland’s mother in a new AppleTV show. Rebecca Ferguson, the actor that plays 26-year-old Timothée Chalamet’s mother in Dune, is 38. It’s 2022. Any number of talented actors 45-plus could have been cast. But is it really that shocking?

To borrow from Virginia Slims, perhaps we really haven’t come that long a way after all, baby.