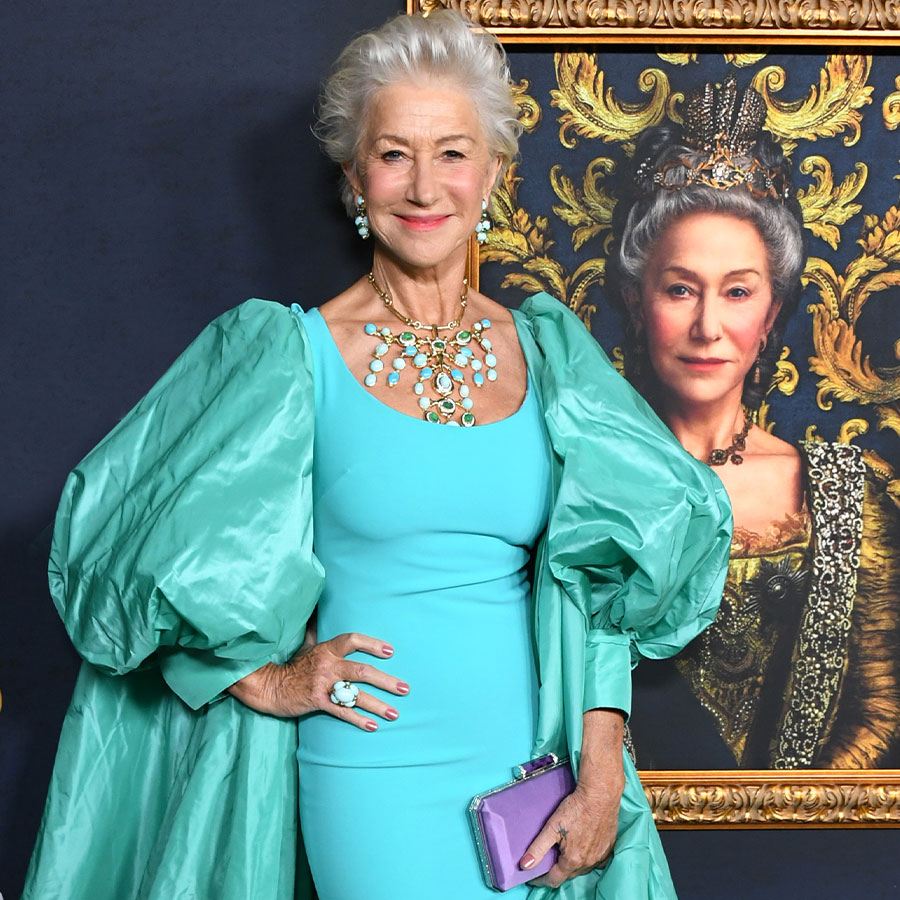 Helen Mirren, pictured here at the L.A. premiere of HBO’s 'Catherine the Great’, has appeared on the cover of Zoomer cover twice — and we reflect on a few juicy bits of wisdom she’s shared with us over the years. Photo: Jon Kopaloff/Getty Images

At Sunday’s Screen Actors Guild Awards, Dame Helen Mirren (and what a dame she is!), 76, received the 2021 SAG Life Achievement Award, and we can’t help but gush. Since Mirren’s pivotal role, at 46, of Inspector Tennison in British TV’s Prime Suspect, to her blowing up the internet promoting her need for speed in the last few Fast & Furious films, it’s no wonder.

Over a 50-year career, Mirren has masterfully suspended our belief, from the Queen to Catherine the Great to what will be another inspiring performance, no doubt, in Golda, as in Golda Meir, Israel’s first female prime minister, coming soon.

In speaking with the U.K.’s Daily Mail this week about the SAG accolade, Mirren talks honestly about her feelings. “You are, in a way, coming to the end of the road … [it] is in sight where it wasn’t 20 years ago,” she said. She added that she didn’t quite grasp what a big deal a lifetime achievement award is. “It’s a moment of reflection.”

And, because Mirren has appeared on the cover of Zoomer twice, we couldn’t help but reflect on some of the few juicy bits of wisdom that she’s shared with us over the years. making it easy for us to find 13 reasons to love Helen.

She takes tech with a grain of salt. “I am rather happy that I knew the world before technology,” she told us. “The constant learning process of technology can be sort of exhausting. It seems like every week you have to learn something new about how to pull up WhatsApp or something.”

She really is friends with Vin Diesel. Mirren cornered the actor at a party, telling him, “You have got to put me in one of your [Fast & Furious] movies!” she told us. And voilà, she landed a part. Diesel also helped her with her Instagram account (for which she has 600,000 followers), and the rest is badass, mob-boss mama history.

She routinely goes viral on the internet in an era of celebrity defined by youth and digital follower counts. From high-speed police chases for F&F to a video of her busting a move with fellow Oscar winner Viola Davis, to photos of her posing with actor Idris Elba across the hood of a white sports car in a floral dress at the première of Fast & Furious Presents: Hobbs & Shaw. And let’s not forget that red bikini shot. Furious, indeed.

She signed a spokesmodel contract — at 69. In 2014, L’Oréal Paris signed Mirren as a brand ambassador for its Age Perfect skin care and cosmetics line.

She practises gratitude. When we asked Mirren what she might tell her younger self: “She certainly would be happy that she was still working, still able to do the thing that she wants so much and that she feels very intellectually and emotionally and absolutely committed to it.”

She’s matter-of-fact. “We start aging from the moment we are born,” she told Zoomer. “It’s the natural part of the forward thrust of life, and there is no point in trying to stop it. You have to embrace it and go with it. And looking after yourself inside as well as outside is the most important. So find a way of living with it and making it work for you, making it a positive thing.” She can rap. On a 2018 episode of The Late Late Show with James Corden, she dropped the verse: “I’ve played the Queen/But also warriors and witches/Crime lords and wizards, bosses and bitches/Detectives and whores/From Altman to Shakespeare/The only role you ever played is ‘Guy Who Begged to Be Here.’”

She kicks ass as an action hero. Aside from playing a jail-breaking criminal in the Fast & Furious franchise, since 2010, Mirren has also played a deadly assassin in the action films Red and Red 2, an army colonel ordering drone strikes on terrorists in the thriller Eye in the Sky — all roles that in a previous generation would go to men.

She hijacked a camper van with Donald Sutherland. In the 2017 film The Leisure Seeker she starred alongside the Canadian acting legend as one half of a terminally ill couple embarking on one last road trip. When we asked Sutherland, 84, about Mirren at the time, he declared, “I love, adore, admire, treasure, cherish [her]” before launching into this story: “They were filming behind us, and I turned to her and said, ‘What if we just go?’ And she said, ‘Could we?’ And I said, ‘Should we?’ And she said, ‘Probably not.’ And then we accelerated and, suddenly, the [crew’s] going, ‘Slow down! Slow down!’ So the temptation was there, always.”

She’s just like us. “I go to the supermarket and I catch the bus and I take the subway, ” she told us, “but I don’t feel the need to constantly advertise that side. I don’t really like self-advertisement, so I am very un-millennial in that sense.”

She loves to garden. “I still don’t know how to quite prune roses,” Mirren, a noted green thumb, admitted to Zoomer, “and it’s a constant learning process.”

She’s not afraid to play with her looks. For her red carpet appearance at the Cannes Film Festival in 2019, Mirren’s blond bob was transformed into a lovely shade of pink, matching her rosey-hued gown.

She’s inspiring. “She’s what we all aspire to be,” actor Colm Feore, 63, who starred alongside Mirren in the 1990 Canadian film Bethune: The Making of a Hero and the 1997 film Critical Care, told Zoomer in 2019. “She radiates this conviction that she’s beautiful and talented and delightful and delicious. And you just think, ‘I can’t get enough.’”

Secrets for Living a Good Life

As reported on this website, in 2016, at Elle magazine’s 23rd Annual Women in Hollywood event in Los Angeles, Mirren accepted the Legend Award. She ended her speech with her top-five tips to get through life, noting, “I’m quite old so I’ve lived quite a lot of life. Feel free to pass these along.”

1. Have a Drink. “Never drink alcohol unless you are celebrating something, upset about something or if it’s a day that ends with the letter Y. And never drink when you’re driving.”

2. Wait to Get Married. “Don’t be in a rush to get married, honestly. I married Taylor [Hackford] much later in my life and it’s worked out just great. Give your partner the freedom and support to achieve their ambitions. Very important and that goes both ways, men and women.”

3. The Game of Life. “At the blackjack table, always split aces, eights and nines. Believe me, it really improves the odds.”

4. Treasure Your Friends. “Connect with friends daily, [and] I don’t mean on Facebook. Better to have three great friends than 300 friends on social media. Friends you can really talk to.”

5. Ignore the Haters. “Ignore anyone who judges the way you look, especially if he or she is some anonymous, miserable creep lurking on the internet.”