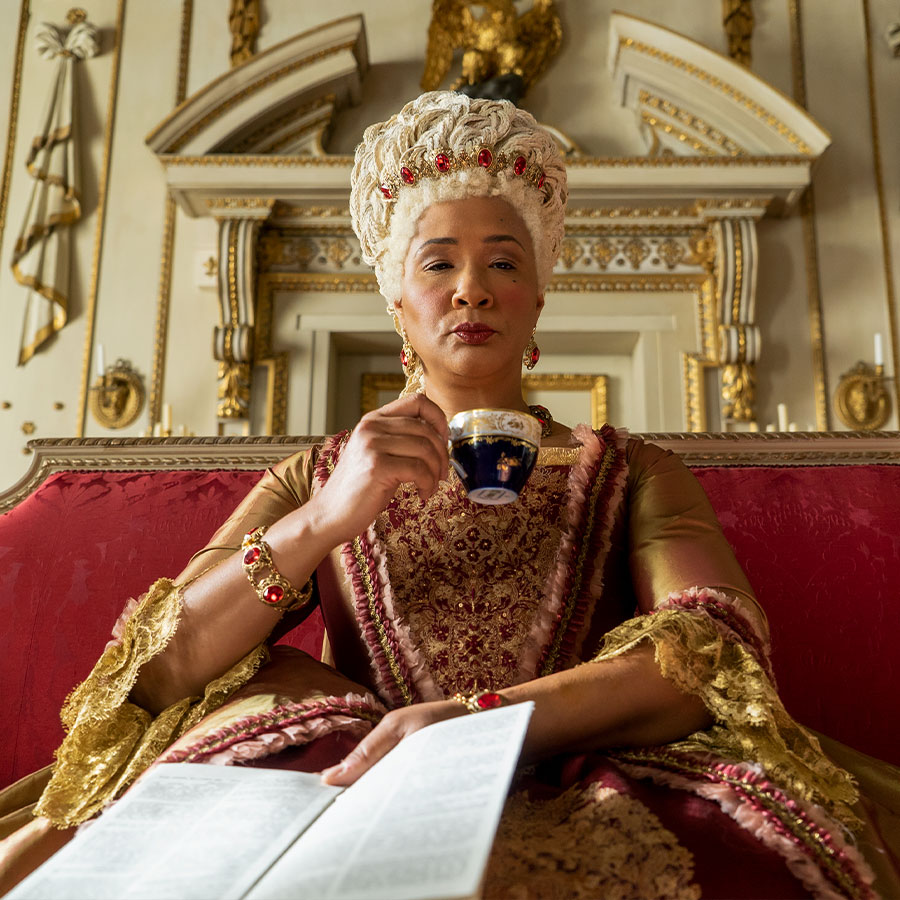 Ahead of the season 2 premiere on March 25, Golda Rosheuvel — seen above as Queen Charlotte — revealed how her family's connection to high society helped her ease into the role. Photo: Liam Daniel/Netflix

Golda Rosheuvel says her role as Bridgerton‘s snooty, gossip-craving Queen Charlotte came quite natural thanks to her family’s connection to high society.

In an interview with Tatler for their latest cover, the 52-year-old Guyanese British actress explained how her mother’s upper middle class upbringing in London wasn’t far removed from the upper echelon’s of royal court.

“I didn’t need to do much research because I knew the world this character came from already — it was my mother’s world and that makes her very easy to play,” she told the publication.

“Every time I dress up as Queen Charlotte, I pay homage to my mother.”

Her mother’s world included all the trappings of a wealthy lifestyle and even saw her share table with royalty.

“My grandfather was the headmaster of Colet Court (St. Paul’s prep school), my great-uncle was Bishop of Barbados, later Archbishop of Jamaica, and when my mother visited him there, she had dinner with Princess Margaret,” she said.

As the only character not included in the original source material, Queen Charlotte was hers to shape as she wished. While audiences got a glimpse into the queen’s struggles with her husband’s mental illness in the first season, she says audiences can expect a further excavation of the character in the upcoming season, airing on March 25.

“I’m pleased they keep pushing the journey of her private life, so it’s not just about the glamour of the balls but also a deep delve into her heart,” Rosheuvel says of the character. “You’ll see a lot more of the yin to her yang. I just love that she’s such a complex character; she’s mischievous, dedicated to the crown, dedicated to the gossip and the pomp and ceremony. It’s so fun to play.’

Her interpretation — complete with sky-high wigs and opulent gowns — has earned her an important fan in Julia Quinn, the author of the book series the show is adapted from.

“I go back and forth between wishing I had actually written her in the books and then being glad I didn’t, because I don’t know if I could have done as good a job,” the author told Oprah Daily.

The series, created by Shonda Rhimes, was considered groundbreaking in its colour-blind approach to casting.

As for claims from historians that the regency era monarch was of African descent, Rosheuvel says she didn’t do a “deep dive” into her history.

“Bridgerton is more of a meta, fantasy world than a documentary — an amazing genre piece, pushed and twisted to work with our modern sensibilities,” she told Tatler of the show’s reimagining of the era.

The real Queen Charlotte, born Sophia Charlotte of Mecklenburg-Strelitz to a German duke and princess in 1744, became queen consort at the age of 17 upon her marriage to King George III in 1761.

The theory behind Charlotte’s African ancestry was popularized by historian Mario de Valdes, who claims she directly descended from a Black branch of the Portuguese royal family. More specifically, he traces her genealogy back to Margarita de Castro e Souza, a 15th century Portuguese noblewoman and descendent of 13th century ruler Alfonso III and his lover Madragana, who he claims was African.

The historian also cites royal portraits and historical accounts of her appearance as evidence of the monarch’s Blackness.

And while several historians refute the accuracy of the theory and the evidence he uses to support it, Quinn — who consulted on Bridgerton — can see how the ongoing debate informed the show’s alternate history.

“I don’t think it’s ever going to be proven or disproven to be honest with you,” she says. “But let’s say she was Black. And what if that was accepted at the time and people acknowledge that, and then she used that position to lift other people of colour to higher positions in society. What would society look like?”

Rosheuvel’s upbringing somewhat overlaps with the show’s adjusted conception of race. Her parents were cast in their own colour-blind love story, with the two wedding at a time when interracial marriage was frowned upon.

“It was a mad set-up at that time: a black man and white woman getting together,” she told Tatler. “There’s always pressure being a biracial couple, but both my grandmothers were such warm, friendly, generous people, so it never was a problem.”

She couldn’t always say the same of her biracial identity, the duality of which was often challenging during her career as an actor.

“The majority of my experiences were positive but there were moments when I went up for parts and you’re not black enough for one and not white enough for another, so it was about managing that disappointment,” Rosheuvel said. “It was frustrating and confusing.”

Fortunately, she explains, a little patience and whole lot of belief paid off.

“I’ve been pushed back, but I’ve leapt over and stepped 10 feet further,” the actress, who’s reportedly slated to receive her own spinoff as the Bridgerton queen, said.

“I’m a great believer in waiting, in biding my time, being confident enough in my craft and who I am as a person to know that it will happen, that one day someone would see me and go, ‘Right, you are perfect for playing the queen of England.'”

The “Bridgerton” Season 2 Trailer Is Here, And It’s Hotter Than Ever