‘Lucy & Desi’: Lucie Arnaz On the New Doc That Allows Her Parents to Tell Their Own Story 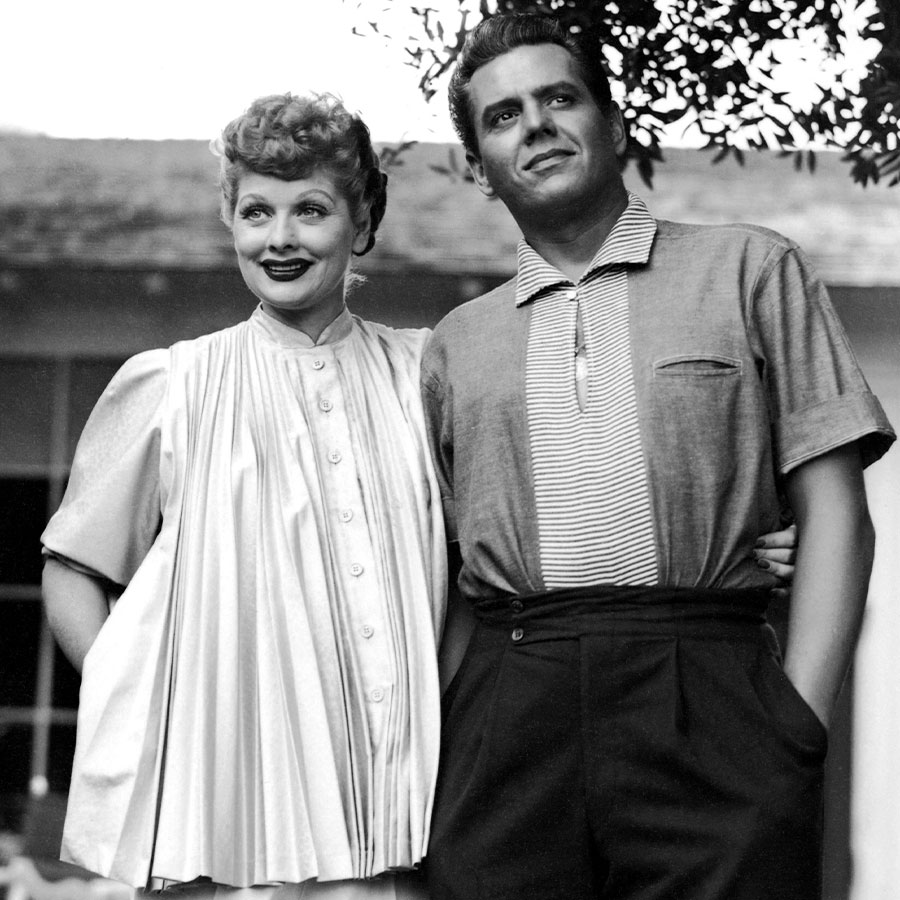 Lucie Arnaz, the Emmy-winning daughter of television icons Lucille Ball and Desi Arnaz (pictured above), says the latest doc exploring her parents' lives should be "required viewing" alongside the feature film 'Being the Ricardos.' Photo: Courtesy of FPG/Getty Images

Striking the right balance juggling work and relationships, all the while making people laugh, is not exactly unfamiliar territory for actress-singer Lucie Arnaz.

As the Emmy-winning daughter of television icons Lucille Ball and Desi Arnaz, she saw this delicate see-saw in action, with all its highs and lows and, sitting down recently with comedy great Amy Poehler, Ms. Arnaz saw a familiar spark.

From this meeting came the new documentary, Lucy & Desi, directed by Poehler. The feature, following its virtual premiere at the Sundance Film Festival in January, will begin streaming March 4 on Amazon Prime.

Lucie Arnaz has been a torchbearer for her parents’ storied legacies for more than 30 years.

It is a role that has entailed promotion, protection and sometimes correction to the record along the way — not to mention a juggling act of her own balancing family life with a career on stage, screen and television.

The role of torchbearer has been a particularly busy one over the past two years as the lives and legacies of the I Love Lucy stars has seen renewed interest, but with some time on her hands after the global pandemic led to the postponement of her sold-out cabaret tour, she was able to focus and tackle the challenge head-on.

In recent months, Lucille Ball’s life was put under the microscope by Turner Classic Movies in their The Plot Thickens podcast, SiriusXM relaunched Ball’s long-forgotten radio chat show, Let’s Talk to Lucy, and, perhaps most prominently, the lives of both Lucy and Desi have been brought to the big screen in Oscar-nominated performances delivered by Nicole Kidman and Javier Bardem in Aaron Sorkin’s film Being the Ricardos.

“It’s raining Desi and Lucy — and all I can say is I did the rain dance,” says Ms. Arnaz with a laugh.

Speaking over Zoom from her Palm Springs home, Lucie Arnaz settles into the screen sporting a stylish silver mane framed by a raspberry-hued T-shirt appropriately emblazoned with, “It’s a Lucie thing. You wouldn’t understand.”

It’s a shirt, she stresses, she found ready-made online — but after 70 years in the public eye, it’s safe to say that audiences just might have an inkling.

This was laid bare when Ms. Arnaz, along with husband Larry Luckinbill and Don Buford, produced the award-winning 1993 documentary Lucy & Desi: A Home Movie.

It was, she said, originally going to be billed as “A Daughter’s Search,” as she sifted through thousands of feet of home movies uncovered after Ball’s death in 1989 to shed light on some unanswered questions she still had about her parents.

“I have lived a lot over the last 30 years and my opinions have changed,” says the grandmother of three, who began work on the documentary when her own three children were young. “My experience affects how I look at the world and it affects whether or not I blame anybody for anything — or do I believe that everything happened exactly the way it was supposed to for my benefit.”

She pauses for the briefest of moments to consider and repeat, “My benefit.”

“When you look at it like that, you answer differently when people ask you questions because there’s no more of that ‘living in lack’ thing, the ‘I wish I had …’ or ‘I didn’t get …’ I’m not there now. I’m just not.”

Lucie Arnaz was first approached with the idea of a new documentary by White Horse Pictures about four years ago. With Ron Howard signed on as a co-producer through his company Imagine Entertainment, she says she felt something positive on the horizon right from the outset.

They knew what they wanted from the beginning, she says, but it still took some convincing that another documentary was needed.

“I loved what they said, I loved their attitude and the respect they had for the subject matter, and it didn’t sound like they just meant to go out and do a frilly tribute piece,” she says. “It sounded like they wanted to do a deep dive and really get into what was going on in their lives and I am all for that.”

But there was one stumbling block.

Involved in the production of Being the Ricardos, Arnaz wasn’t contractually able to get involved with another ongoing biographical project on her parents. Yet she took her dad’s advice of “There has to be a way,” and followed her heart when she next met with the Amazon Studios brass.

As Sorkin did not write the “big scope” on her parents that she initially thought he would, she pitched the documentary as a potential companion piece to the feature film and they gave her a waiver to become involved.

“When word got out how fabulous [the documentary] it was becoming, Amazon bought it from Ron Howard’s company,” says Arnaz. “That concerned me at the beginning because why would they do that? Did they just want to bury it like they didn’t want it as competition? It was the complete opposite of that; they just really wanted to own it because they knew it was going to be this good — and it was!”

Arnaz initially didn’t know Amy Poehler was set to direct the documentary, but knew she had “the right sensibility” to go after a story like this: “somebody in the business, trying to raise children, balancing work and relationships.”

“She’s really smart, she’s funny, she understands comedy, but her heart is about much more than making people laugh,” says Arnaz. “When I did my first interview with Amy, her questions were amazing and the level of things she was interested in was quite different than anybody else. What she wanted to know for this was quite fun to answer. It was hard, but it was interesting fun.”

Making a documentary like this is particularly difficult, she adds. You often start with far more material than you can possibly use and “you cull and cull to find the story.” That is a task she says Poehler handled “brilliantly.”

What hadn’t been out there before were hours of audio tapes recorded by Lucille Ball and Desi Arnaz in preparation for their respective autobiographies.

Making these tapes accessible to the documentary team gave Arnaz the chance for her parents to tell their own stories in their own words and to find a fresh angle. The result, she says, should be “required viewing” alongside Being the Ricardos.

“Being the Ricardos is fictional, based on the lives of Lucille Ball and Desi Arnaz, but it’s an artist’s rendering. There is portrait, photograph and painting. If you do a portrait, you would go around, do your research and find someone who is a wonderful portrait painter so it will look as much like you as possible,” Arnaz explains.

“If someone like Pablo Picasso came to your door and said, ‘I heard you wanted your portrait painted,’ would you say no? Even though you know his version of you is not going to look exactly like you, it’s going to have an essence that makes you think, that is kind of an exaggeration, but in the movie world, a Sorkin film is a Picasso-esque rendering of a certain thing.

“Being the Ricardos distills three distinct events in the lives of Lucille Ball and Desi Arnaz into a single production week on the I Love Lucy set. The real-life action may have taken place over several years, but condensed timespan,” says Arnaz, “is the least thing [audiences] should be worried about.”

“I didn’t want to die on that hill,” she says of the truncated timeline. “There are bigger fights we could have fought.”

That fight extended to how some of the real-life pioneers behind I Love Lucy were depicted on the screen, including trailblazing television writer Madelyn Pugh Davis, whose depiction by Alia Shawkat could be seen as a surrogate for the audience, looking at the world of 1953 through a lens closer aligned to the sensibilities of 2021.

“I was concerned with that, not for the picture so much [but] Aaron Sorkin would say, ‘Who’s going to know? It doesn’t matter. Nobody’s going to care.’ I said, ‘Their children will,’ and he [said] ‘Now I have to worry about the kids, too?’ Yeah, that’s what I do for a living — I kind of worry about the offspring, the people who are left behind and what they think,” says Arnaz.

“Six years I tried to convince the powers that be that we should do this more accurately as far as the people are concerned. Did Vivian Vance and William Frawley (Fred and Ethel Mertz) gnaw at each other sometimes in their relationship? Sure. Was it like that? Never! Are you kidding me?”

Arnaz, of course, came to the table with a unique lens of her own.

Sorkin, she says, would sometimes question her knowledge of the subjects, pointing out that she was only a little over a year old at the time the film was set. But, in her mind, a lifetime of memories with the characters being brought to life on screen made her qualified to speak out on any inaccuracies.

“I would say, ‘I grew up with these people. I knew them my entire life. I know their relationships and these people are my parents — sometimes they talked about their work, their life, and their family,’” says Arnaz, adding she was given “meaningful consultation” on how her parents were portrayed. “Next time I will try to go back for full approval!”

Still, Arnaz says the film got her mom and dad “pretty darn accurate.”

“That’s what I was most concerned about and, truthfully, that’s the only thing I had approval over: how they came off and what the script looked like up to a point,” she says.

Yet, when she saw the finished product, Lucie Arnaz says she had tears in her eyes, citing it as “film craft at its best.”

“It looked beautiful, it sounded great, and Sorkin’s direction is impeccable. What these people had to work with, what he wrote, they handled really quite well,” she says.

“Did we have disagreements on what it should be? Yeah, some of it is quite fantasy. I wouldn’t say go watch Being the Ricardos if you want to know everything about these people and the filming of the show — take it with a grain of salt — but all in all the essence was pretty great.”

Maybe one of those “Lucie Things” emblazoned on her T-shirt this month is the quest for truth; despite the numerous books, documentaries and features that have come out about her parents, it’s a quest that remains as strong as ever for Lucie Arnaz, and bolstered by Poehler’s new documentary.

As to lessons learned from her parents, Arnaz says, “We can see what happened in their lives, we can see what went on, how they did or did not respond in a certain way, and how that affected their marriage, their children, their lives. We’re learning it for them and I think that is good because, through them, we’re learning how to help ourselves.”

As “Being the Ricardos” Hits the Big Screen, Why “I Love Lucy” Remains as Relevant — and Funny! — as Ever