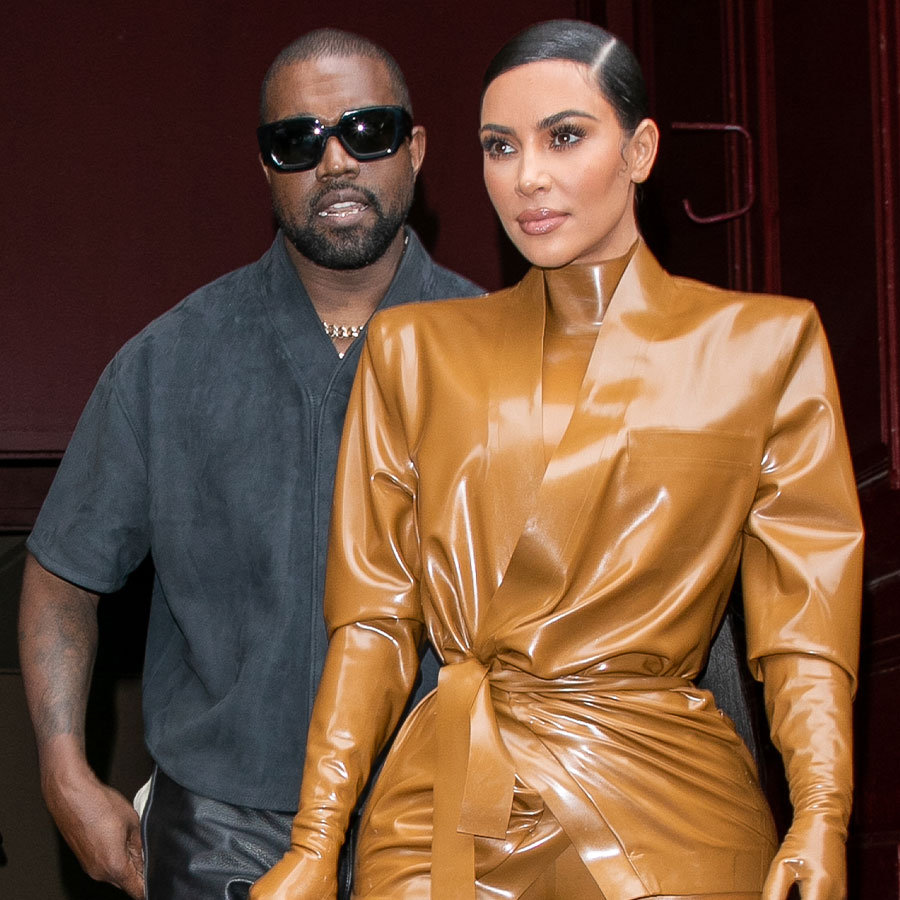 In a creepy repeat of the 14 Kim Kardashian clones Kanye West cast in his 2018 Yeezy campaign, the rechristened — and newly single —“Ye” takes weird to new heights, only dates It Girls and Influencers he can model after his soon-to-be ex-wife.

Reacting to Kardashian’s happy romance with Pete Davidson — a well-loved and wealthy comedian with BDE — West embarks on a bizarre, utterly transparent, and clearly futile campaign to make her jealous by attaching himself to a series of side pieces — styled to look exactly like his former wife.

The folly kicks off with Manhattan cool girl-cum-actress, Julia Fox, 32, who’d made a splash playing femme fatales in 2019’s Uncut Gems and Steven Soderbergh’s 2021 crime caper, No Sudden Move. Instantly treated to the Ye Fashion Experience — Fox emerges in a sea of patent leather, Balenciaga, and unflattering, over-edgy eye makeup that Kanye himself applied. In a perfectly normal response to suddenly being followed around by a professional photographer Ye’s hired to document the duo’s every move, the slightly zaftig Fox drops 15 pounds in six weeks.

In the Interview magazine feature that came out the first week of their relationship, Fox sounded like a press release, dutifully extolled the Wonders of Ye — His fabulous style! His endless largesse! “A whole room full of clothes! Who does that on a first date?” Yes, racks of free designer clothing would seem an upside of dating an obnoxious celebrity who’s obsessed with his ex — until you learn that it was all Diesel. Is any woman that thrilled when a bonefide billionaire gifts her with a hotel suite full of B-list denim?

At least Fox, a savvy player, was in on the game. When the duo parted six weeks later — as Ye sent a literal truck load of roses to his ex-wife on Valentine’s Day — Fox dismissed online trolls who claimed she was weepy and heartbroken. “I haven’t cried since 1996,” she clarified, referring to herself as a “number one hustler.” Fox clearly got what she came for: next level fame. “It definitely felt like I was his girlfriend,” Fox told the New York Times. “But it also felt like I was being cast in the role of his girlfriend, and he was casting me, the orchestrator of it all.” An experience she deemed “a crash course on how to be famous,” Fox proved an excellent student. Giving that interview in a luxe suite that Versace was paying for during Italian Fashion Week — where she now commanded front-row status at top shows.

Enter Chaney Jones, an unknown “influencer” who’s taken Ye’s Kim Kloning escapades to new heights. A short brunette with an inflated hourglass figure, waist-length black hair extensions and a mouth full of filler, Jones possesses a more than passing physical resemble to the reality TV star and could be her twin when gift-wrapped in Ye’s preferred wardrobe. His signature Matrix meets Maxim Babe pastiche of body con stretch, Balenciaga, head to toe black, and catsuits with lashings of leather, latex, PVC and hoochie hotpants. Curiously, Jones is permitted to wear massive mono shades, despite the fact that Ye “banned” his wife from sporting big sunglasses during his stint as her personal stylist.

A more malleable 24-year-old, the Jones go-round of Kanye’s rotating Kim-a-thon feels more like a costume party than the concept art vibe that a more calculating Fox brought to the Weirdness. Also perceiving her Ye union as a kind of acting gig, a source told Page Six of Jones: “She’s loving her role.”

Meanwhile, as Jones picked up 150,000 new Instagram followers, Kanye accelerated his attacks on his ex-wife’s new boyfriend. Dropping a shocking animated claymation video for his new song “Eazy” in which he buries a bound and hooded claymation Pete Davidson alive while rapping about how he “bought the house next door” to Kim’s (true), “can beat Pete Davidson’s ass,” and he and Kim are “havin’ the best divorce ever”. Doubt she’d agree. Strangely, no one in Ye’s circle has pointed out that Davidson is not the reason Kim wants a divorce — his exhausting behaviour is.

To top it off, Kanye took to social media to air out more dirty laundry when he asked fans what he should do about his daughter appearing on TikTok against his will. Kim later responded with her own statement criticizing his attacks on social media, while a cousin used the spat to sneak in a tone-deaf request for Yeezy trainers in a family chat.

“Don’t ask me about Yeezys right now,” Kanye replies coldly in the conversation posted to his Twitter account.

The Chaney clan is in the mental health field. Her father is CEO of First State Behavioural Health, a company that employs a few Jones women, including Chaney herself, who is CEO. As well, Chaney studied elementary education and human development at the University of Delaware, making the Dean’s list three years running, and is currently earning her masters in counselling. Perhaps she really is the woman for the job that is Ye? In any case, the family business can only come in handy if her “role” with the rapper lasts more than six weeks.

“Being mentally ill is not an excuse to act like a jackass,” said Pete Davidson, who’s been open about his own struggles with mood disorders, in an televised rebuke of Kanye’s cringe-worthy 2018 MAGA rant on Saturday Night Live. “Kanye, I know you’re like ‘Yo, this is the real me, I’m off the meds’ … take ‘em. There’s no shame in the medicine game. I’m on them, it’s great. Take them.”

“Lucy & Desi’: Lucie Arnaz On the New Doc That Allows Her Parents to Tell Their Own Story