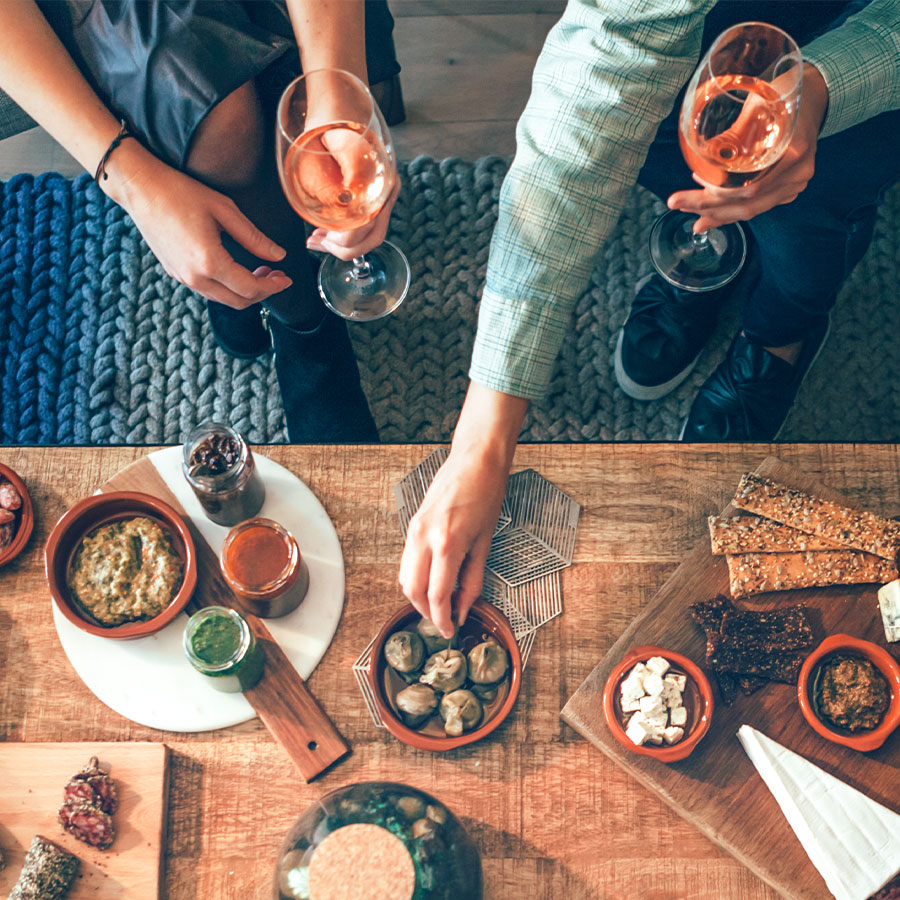 There has never been a better time to be inert. The once-pejorative designation of “couch potato” now instead points to someone with their finger on the pop-culture pulse, as multiple streaming services compete for eyeballs with an often-dazzling mix of original and acquired content across all genres.

Really, the amount of viewable stuff on offer is staggering. And there’s always free-to-borrow DVDs at the local library with some also offering free streaming services. Plus, there’s video on demand.

Of course, one’s viewing selection is only part of an excellent night in, with food and drink combining to create the ultimate triumvirate.

And since themes are fun, we humbly submit three: a buzzy recent film paired with something bubbly; a standout Canadian film paired with Canadian wine; and a classic film paired with a classic winery or varietal. In all three categories, we offer snack suggestions and high- and low–end price points for wine because, sadly, they can’t all be $100 bottles.

Film: Being the Ricardos. Who would have believed that more than half a century after their unparalleled success as on-screen and off-screen spouses, late actor-comedians Lucille Ball and Desi Arnaz would be smoking hot once more? Aaron Sorkin’s crackling snapshot of a tense chapter in the lives of the I Love Lucy stars divided critics on release, but nevertheless captured the couple’s artistic fearlessness and camaraderie while earning three cast members — Nicole Kidman, Javier Bardem and JK Simmons — Oscar acting nods. Being the Ricardos is also a tasty sampler ahead of Amy Poehler’s hotly anticipated new documentary, Lucy and Desi, which premieres Friday (March 4) on Amazon Prime. Assess how close Kidman and Bardem came to emulating the real deal.

Indulgent: Peller Estates Signature Series Ice Cuvée Rosé. What makes this gorgeous pink sparkler so unique is the addition of a dosage of Vidal icewine, complementing its classic blend of Pinot Noir, Chardonnay, and Gamay Noir. With a residual sugar content of 21 grams per litre, the Ice Cuvée Rosé is sweeter than many high-end bubblies, but it’s a good sweet, with notes of bright cherry and raspberry. It also looks lovely in the glass.

Snack Options: Potato chips. As noted previously in this space, sparkling wine’s acidity is a perfect counter to the fat and salt in chips. For a suitably throwback edition, we suggest rocking it old school, pairing plain rippled chips with dip made from onion soup mix blended with regular or vegan sour cream. Remember eating this? Can a Velveeta melt be far behind?

Film: Cosmopolis, director David Cronenberg’s starry 2012 adaptation of author Don DeLillo’s 2003 novel charting a fraught day in the life of a morose young billionaire making his way across Manhattan. Cronenberg — 79 on March 15 — is very much back in the spotlight, having recently been voted by the Toronto Film Critics Association (of which yours truly is a member) as the recipient of this year’s Company 3 Clyde Gilmour Award, recognizing his achievement in putting Canadian cinema on the world stage. Tantalizingly, the director last year reunited with actor Viggo Mortensen (see also the pair’s excellent collaborations in A History of Violence, Eastern Promises and A Dangerous Method) for upcoming horror Crimes of the Future. The film, also featuring Léa Seydoux and Kristen Stewart, is expected out this year.

Indulgent: Any red wine from Southbrook. Everything about this certified organic and biodynamic Ontario winery is noteworthy, from its origin story to its commitment to sustainability to its exquisite building designed by Jack Diamond of Diamond and Schmitt Architects — also the force behind Toronto’s Four Seasons Centre for the Performing Arts, home to the Canadian Opera Company and the National Ballet of Canada. So yeah, it’s kind of a show. The wines are fantastic, too, and may be shipped across Canada for free on orders of $120 or more, according to the winery.

Wallet-Friendly: Jackson-Triggs Reserve Merlot punches well above its weight — it retails for under $15 in B.C., Quebec, and Ontario — with a medium body and rich, plummy notes.

Snack Options: The absolute best Canadian gouda you can afford with the best fancy crackers you can find (Lesley Stowe Raincoast Crisps Fig and Olive anyone? Swoon. Don’t forget the fig conserve.)

Film: The Craft. Okay, so calling this teen witch movie a classic might be a stretch (camp classic maybe?) but it is nostalgic and heaps of fun as well as a reminder of a moment in time when actress Fairuza Balk was absolutely everywhere. It also features the delightful, Canadian-born Neve Campbell who is immensely watchable. And its soundtrack is a time-trip back to the heart of the ’90s featuring Spacehog, Tripping Daisy, Letters To Cleo and Sponge. Seriously, when was the last time you read the word Spacehog anywhere? And didn’t they seem destined to be bigger?

Indulgent: Côte des Roses Rosé from acclaimed French winery Gérard Bertrand. You might think a gargantuan red would be the wine of choice for watching wannabe witches, but light, bright rosé seems like an appropriate contrast to all the spooky action. With its blend of Grenache, Syrah, and Cinsault in a showstopper bottle, this wine is sure to cast a spell all its own.

Wallet-Friendly: La Vieille Ferme Rosé. Widely available across Canada for under $15, this bone-dry and surprisingly fresh, fruity French rosé is a perfect sipper, with soft notes of peach and melon.