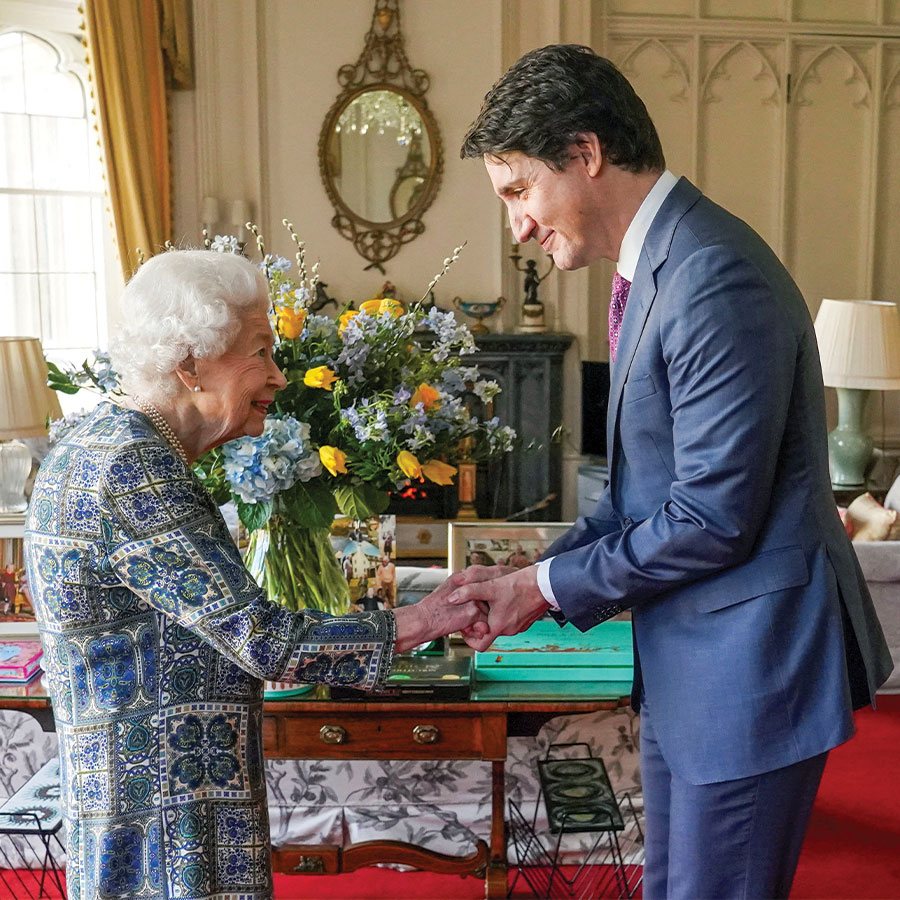 Photographs of the meeting showed Trudeau holding the Queen’s hand in his, while also chatting and laughing.

The Palace announced on Feb. 20 that the Queen, 95, had tested positive for COVID-19, sharpening concerns about the health of the world’s longest-reigning monarch two weeks after she marked 70 years on the British throne.

They said at the time she was suffering from mild cold-like symptoms and cancelled several engagements. She did continue to carry out light duties.

Royal watchers noted that the flowers behind her in official photographs were blue and yellow, the colours of the Ukrainian flag, which they said was a deliberate tribute as very little around the queen happens by accident.

Trudeau is in Britain to hold talks with Prime Minister Boris Johnson on the international response to Russia’s invasion of Ukraine.

Trudeau’s visits to the U.K. typically make for some headlines.

Most recently, there was his live-mic mishap during his 2019 visit to Buckingham Palace at a reception following the 70th anniversary meetings of NATO. Joined by British Prime Minister Boris Johnson and French President Emmanuel Macron, Trudeau was caught on video taking shots at then-U.S. president Donald Trump, mocking Trump for making everyone wait while he held a 40-minute press conference.

And in 2015, after the newly elected Trudeau toasted Her Majesty’s “long and tireless service” — listing off a series of the country’s historical events she was present for — the Queen cleverly quipped: “Thank you, Mr. Prime Minister of Canada, for making me feel so old!”

The Queen will likely continue to do the bulk of her in person engagements at Windsor Castle.

According to a royal source, Queen Elizabeth has “no plans” to return to Buckingham Palace and will continue to stay at the Berkshire residence.

The Queen originally moved to Windsor Castle at the beginning of the pandemic with Prince Philip, who died in April 2021 at the age of 99.

Royal sources have blamed the change in home base on a $460 million refurbishment project at Buckingham Palace, which is expected to stretch to the end of 2027.

“While ongoing, it is not really a place to stay long-term,” a royal source said of conditions at Buckingham Palace.

At Windsor Castle, the Queen will have easy access to the adjoining Frogmore Estate, where she just recently hosted members of her family after emerging from isolation following her COVID-19 recovery.