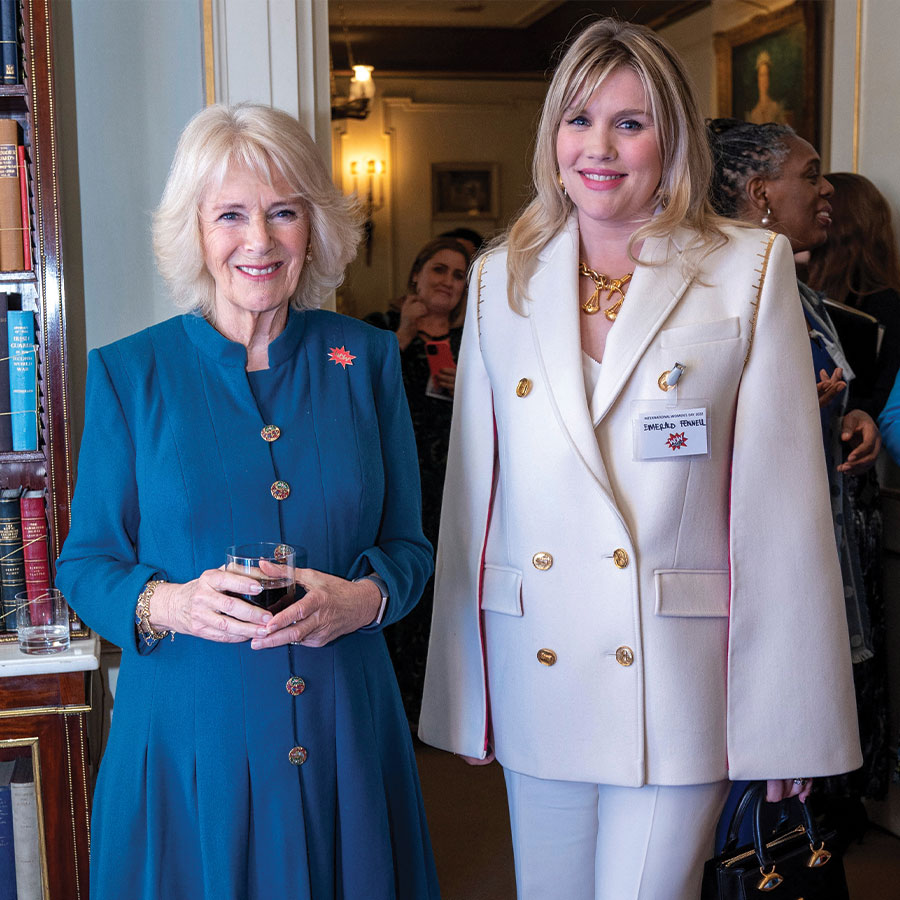 Camilla, seen here with the actress who played her in season 4 of 'The Crown' at an International Women's Day event, joked that it was reassuring to have her "fictional alter ego" on standby. Photo: Arthur Edwards/POOL/AFP/Getty Images

Camilla, Duchess of Cornwall, proved once again what a good sport she is. The news she had met with the on-screen version of herself Tuesday, was reported rapturously. Emerald Fennell, who played a young Camilla Shand in season 4 of The Crown, was pictured chatting animatedly with the duchess. Oh, we all went simultaneously, Camilla must have seen Emerald’s season of The Crown! Whatever are they talking about?

Said meeting took place at the duchess’s home, Clarence House, which she shares with the heir to the throne, the Prince of Wales. Seems Camilla cheekily invited Fennell — also an Oscar-winning screenwriter (for her original story Promising Young Woman, about an avenging female character, which also earned her a best director nod, vanishingly rare for a woman to garner) — to her International Women’s Day event, in honour of the Women of the World festival. The guest list also included Scary Spice Mel B and the Ukrainian ambassador to the U.K., Vadym Pristaiko, the latter giving a moving speech about the plight of her people.

That Camilla was so cool with meeting the woman who played her says something about her sense of confidence and humour. She is currently on quite the roll, with the Queen announcing on the 70th anniversary of her accession to the throne that her desire was for Camilla to be Queen consort when Charles is crowned (in the fullness of time). This is a big deal, a charm offensive decades in the making: when Charles and Camilla married in 2005, it was announced she would be known as Princess Consort, a made-up workaround title to address public sentiment that she was somehow taking Diana’s rightful place (despite the fact Charles and Diana had divorced, when the Princess of Wales died, there was much touchiness about any diluting of her honours). This is, indeed, why Camilla is Duchess of Cornwall instead of Princess of Wales by right of marriage, because it was so associated with Diana. The assertion about Princess Consort was quietly withdrawn from royal websites in recent years, and speculation about elevating a new eventual title for Camilla became rife.

Meanwhile, back to Clarence House today, where the real and the celluloid Camilla were all smiles with the cameras trained on them. The duchess wore a smart medium-blue suit and Fennell in a cream double-breasted blazer over matching trousers. The hostess had earlier set the tone with a self-aware comment to the crowd, according to The Telegraph, saying she found it was “reassuring to know that, if I should fall off my perch at any moment, my fictional alter ego is here to take over.”

For her part, Fennell gave as good as she got, saying: “’I was nervous I might be thrown in the tower but so far so good.” On Camilla, she added: “She’s been in the spotlight for a long time and has always weathered it with a lot of grace and good humour.” Ultimately Fennell refused to be drawn on the subjects their private conversation covered, saying “loose lips sink ships.”

Fennell’s portrayal of a young Camilla (the season was set across the years 1977 to 1990) may in the end have been part of the public softening towards Camilla. Sure, the fictionalized scenes in The Crown brought back to the fore the adulterous nature of her relationship with her prince (and that she was “the Rottweiler” as Diana called her at the time). But, there was a vigour and candour Fennell brought to her portrayal that made Camilla a more dimensional figure: after all, in those years, she was really just the cardboard cut out bête noire of that marital triangle in the public’s mind.

As she herself told Vogue ahead of the series launch: “I have always felt that she might be someone who maybe hasn’t been treated very fairly.” She showed off her own self-deprecating side when she stated in the official Netflix casting announcement: “I absolutely love Camilla and am very grateful that my teenage years have well prepared me for playing a chain-smoking serial snogger with a pudding-bowl haircut.”

That the two should be able to at least play at getting along is not a surprise. Besides sharing a cutting sense of humour, the two come from similar backgrounds, if different generations.

Camilla (née Shand) grew up posh, hunting and being fired from her society-girl interior design job (for partying, Camilla seems to always have been a good time) before she ditched the Prince of Wales to marry cavalry officer playboy Andrew Parker-Bowles and set up family life in the countryside. Royal proximity was not new to Camilla’s line: her great-great-grandmother, Alice Keppel, famously was mistress to Edward VII.

Fennell is the daughter of society jewelry Theo Fennell and author Louise Fennell; her sister is fashion designer Coco Fennell. At their dinner table growing up the girls met luminaries such as Andrew Lloyd Webber. She went to Marlborough (where Kate also attended a few years above her), and on to Oxford. Her acting career has spanned the hit series Call the Midwife and the film Anna Karenina; she also was the writer and showrunner for series 2 of Killing Eve, taking over from her good pal Phoebe Waller Bridge (with whom she had a small part in Albert Nobbs, the two pals playing waiters).

With the travails facing the Royal Family lately — speculation over the funding for Prince Andrew’s cash settlement with Virginia Guiffre; the Prince of Wales’s charity investigations; the Queen’s health troubles; and rumbling thunderclouds threatening from across the Atlantic as Prince Harry is set to release his memoirs sometime this Jubilee year — Camilla and her earthy good time is a great tonic. Add to that the work she is doing to raise awareness for victims of domestic violence, and Camilla is helping redirect the conversation back to the positive works of the family. A photo opp with bright young thing Emerald Fennell, and a fearless self-own of her own past, is another feather in Camilla’s hat collection.