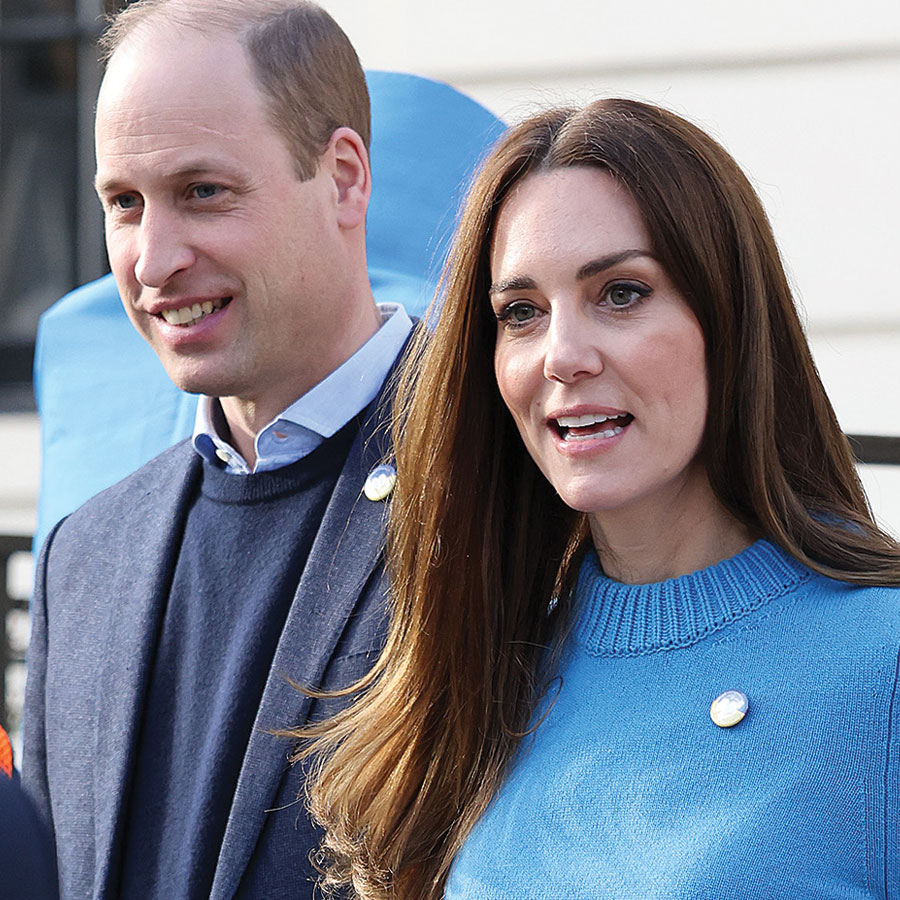 The Duke and Duchess of Cambridge today headed over to the Ukrainian Cultural Centre in London. They came bearing homemade brownies and granola bars for the volunteers at the centre, and joined in sorting donations to be sent to the war-torn country. In a deft and powerful bit of diplomatic dressing, Kate wore a blue Alexander McQueen sweater, the colour of the Ukrainian flag, and both the Cambridges wore pins of the flag itself.

Prince William summed up the feelings of millions around the world saying, “We are behind you.” He also added, “We feel so useless.”

The visit today is a remarkable gesture, because the policy and practice of the royal family is to stay outside the political fray. But as the scale of the humanitarian crisis grows, it was evident that the young royals have been deeply moved by the plight of everyday Ukrainians. The royal rota reported that Catherine was emotional as the pair heard about how the Ukrainian Humanitarian Appeal was supporting people on the ground, directly from the CEO of the Disasters Emergency Committee, Saleh Saleed. William and Catherine, along with Charles and Camilla and the Queen herself, have all made (unspecified, private) donations to the DEC.

The couple also revealed that their elder children, Prince George, 8, and Princess Charlotte, 6, were coming home from school and asking difficult questions about the invasion, like so many children, everywhere. “Ours have been coming home asking about it,” William said. “They are obviously talking about it with their friends in school.” He went on to say he was “choosing his words carefully to explain what is going on.” Again, so relatable to parents everywhere.

This is not the first public show of support from the Cambridges. Last week they issued a rare, and poignant, message of solidarity. “In October of 2020 we had the privilege of meeting President Zelenskyy and the First Lady to learn of their hope and optimism for Ukraine’s future. Today we stand with the president and all of Ukraine’s people as they battle bravely for that future.” It was signed William and Catherine.

The pair received a personal reply from Zelenskyy and wife Olena Zelenska, both 44, expressing public thanks for the support from the royals, who are their contemporaries (Catherine is 40, William is 39); both couples have children of similar ages “Olena and I are grateful to the Duke and Duchess of Cambridge that at this crucial time, when Ukraine is courageously opposing Russia’s invasion, they stand by our country and support our brave citizens. Good will triumpth.”

Perhaps as a way to work around the protocols of senior royals staying out of politics, the donation to DEC from Clarence House came from the Duchess of Cornwall herself. This comment was released, via a spokesperson: “No one could fail to be moved by the appalling scenes of Ukrainians fleeing their homes and the duchess wanted to help in whatever way she could.”

Meanwhile on Tuesday, when meeting with Canadian Prime Minister Justin Trudeau, in Europe for crisis talks among NATO allies, the Queen found a way to show solidarity in the chicest and subtlest manner. Arrayed behind the 95-year-old monarch and the 50-year-old Trudeau was a vase filled with blue and yellow flowers. Diplomatic floral arranging may be a first here, but the ever-protocol aware Queen managed to make her support known, without saying a word.