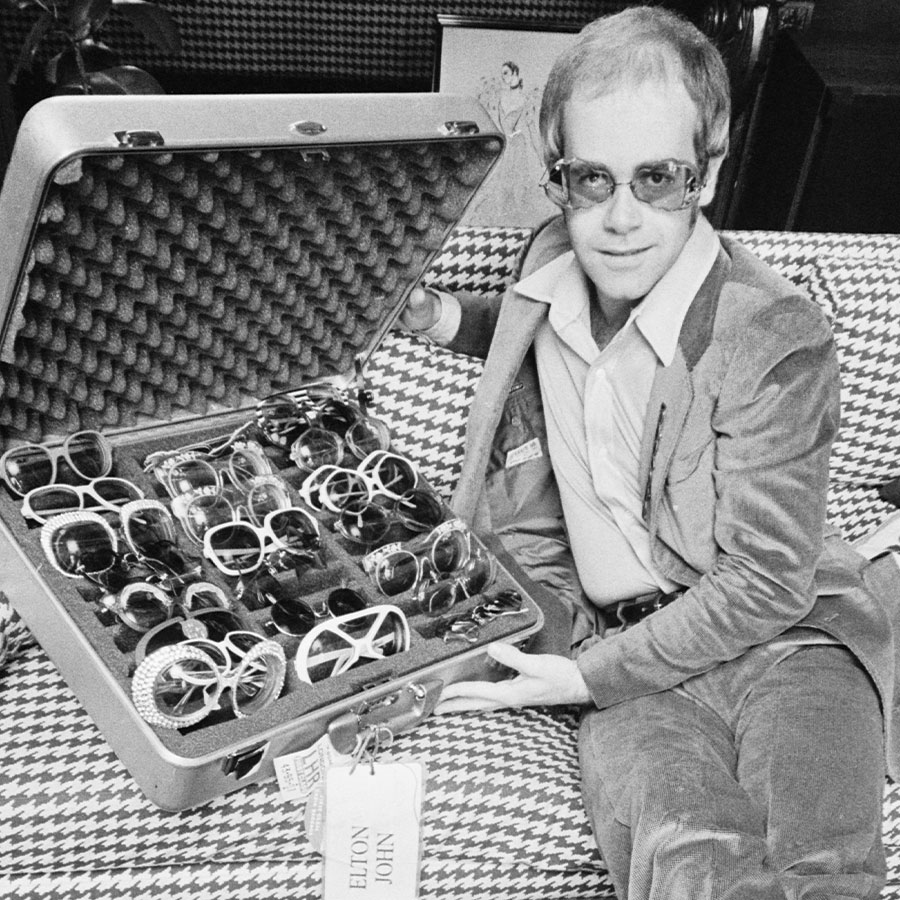 Elton John, seen here with a suitcase of his trademark sunglasses, is set to launch his new eyewear line in Canada. Photo: D. Morrison/Express/Getty Images

Elton John is bringing his eyewear brand to Canada, but the fashion-forward music icon hasn’t partnered with a high-end designer like you might expect for the brand.

Instead, he’s launched his Elton John Eyewear collection in partnership with Walmart, bringing his love of bold and oft outrageous frames to one-stop-shoppers.

“The line is designed to have something for everyone, so no matter who you are, you can always look yourself. It’s not just about glasses, it’s about changing the way people see themselves,” John, 74, says in a press release of the new line he helped design.

Appealing to everyday spectacle wearers wasn’t the only thing that sweetened the deal for the “Rocketman” singer. The partnership includes a $1 million annual donation to the Elton John AIDS Foundation from the company, not to mention a chance to scratch an item off his bucket list.

“Creating a stylish, accessible eyewear collection has been a dream of mine for as long as I can remember,” John said in a promotional video for the new line.

The new collection, now available in the retailer’s vision centres, offers three distinct style categories: “Rocketman, a nod to his chart-topping hit in 1972; “A-List,” reflecting moments he was at the peak of his career; and “Prodigy,” representing his rise to fame from a piano prodigy in the U.K.

Of course, nothing is more authentically Elton John than his extensive collection of shades and glasses — rumoured to include over 200,000 pairs — each of which almost always serve as a statement piece, no matter what outfit they’re paired with.

In fact, Bob Mackie, the legendary fashion designer behind John’s glam-rock stage costumes in the early ’70s, admitted he never had a say in the frames the rockstar chose to complement his designs.

“I have no idea how many prescription, diamond-studded and bedazzled pairs he owned, but he certainly had enough to go with everything,” Mackie told Billboard in a 2019 interview.

His more theatrical frames were often what made his looks so iconic. Standouts include a pair embellished with feathers for a 1974 performance, a novel take on sunglasses that included a retractable awning he dawned the same year and an installation art-style frame equipped with rhinestoned hoops, which he wore onstage in 1974 and again in a 1975 photoshoot on a private jet.

And at 74, the singer may be passing the torch onto the next fabulous superstar. A recent Uber Eats commercial sees Elton switch looks with rapper Lil Nas X, who dons a pair of bedazzled glasses with a version of the feather and sequin outfit he wore to perform “Crocodile Rock” on The Muppet Show in 1977.

Meanwhile, John wears a recreation of the “Old Town Road” rapper’s pink Versace cowboy outfit, which he couldn’t help but complement with a pair of pink-tinted shades.

Of course, the rockstar’s influence on the frame game doesn’t only encompass his more outlandish pieces. His more subdued day looks — which the singer turns to more these days — include a wide variety of tints, shapes and frames, a playfulness that has had an enormous impact on the glasses industry over his five decades as an entertainer.

David Cox, one of the U.K.’s last remaining handmade spectacle frame makers, who replicated John’s iconic frames for the Rocketman biopic in 2019, told Billboard that when John arrived on the scene, “glasses became a part of making a fashion statement.”

While fans won’t find feathered frames or other outlandish designs that resist mass production in the collection, John promises each frame delivers the oomph needed to stand out in a crowd, a thing the rock ‘n’ roll icon would know a thing or two about.

“This collection is for every person staying true to themselves in a world that’s constantly pushing you to be someone else,” he said in a promo.