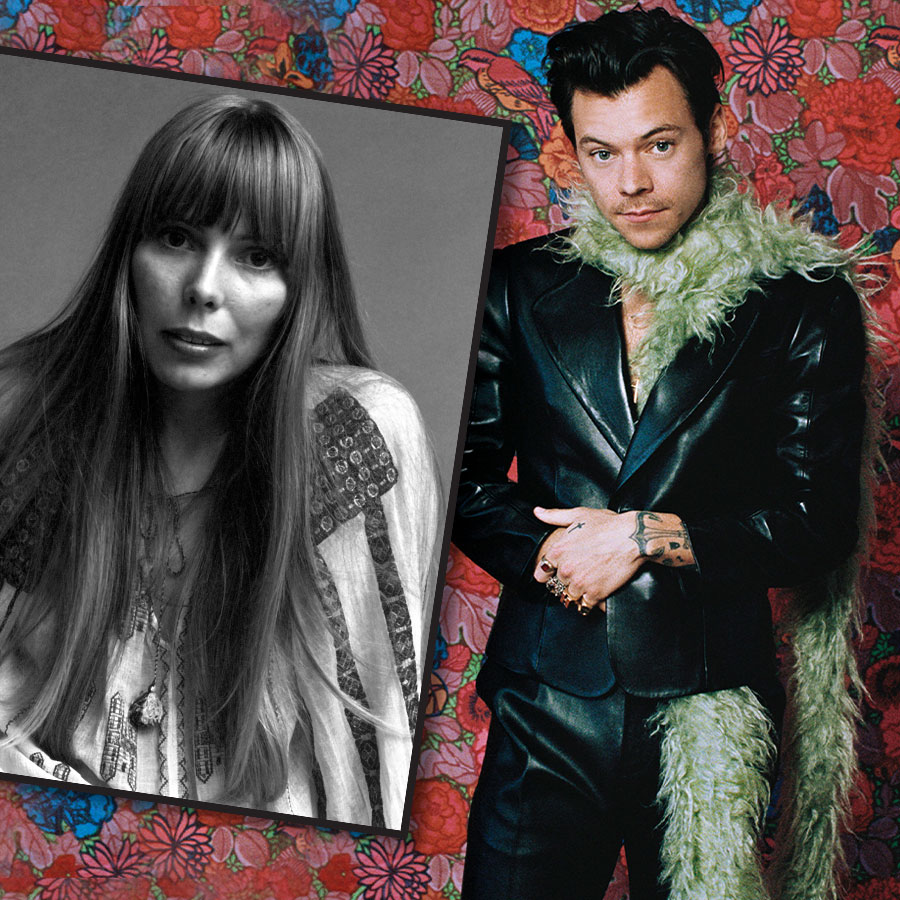 Harry Styles has long revered Joni Mitchell and her music, incorporating her influence — and that of other legendary music acts — into his own work. Photos: Styles at the 2021 Grammy Awards in Los Angeles (Anthony Pham via Getty Images); portrait of Joni Mitchell for 'Vogue,' shot in November 1968. (Photo: Jack Robinson/Getty Images)

Pop superstar Harry Styles received an endorsement from one of his heroes on Wednesday: Joni Mitchell.

The 78-year-old music legend retweeted a tweet from Styles that announced the name of his upcoming album, Harry’s House, and release date of May 20. Mitchell added: “Love the title.”

The title, of course, echoes the name of Mitchell’s own “Harry’s House/Centerpiece” tune, about materialism and a failing marriage, from her 1975 studio album The Hissing of Summer Lawns.

The Alberta-born singer-songwriter tweeted the opening lyrics to the tune shortly afterward.

The tweet, no doubt, delighted the 28-year-old Styles, who professed his love for Mitchell’s music in a 2019 Rolling Stone interview.

“I was in a big Joni hole,” he said of the time he became obsessed with Mitchell’s classic Blue album, which turned 50 last year. He added that he fixated on the dulcimer that Mitchell played on the album, “So I tracked down the lady who built Joni’s dulcimers in the Sixties. She still lives around here … I went to her house and she gave me a little lesson — we sat around and played dulcimers.”

He also called Blue and Van Morrison’s 1968 Astral Weeks record, “just the ultimate in terms of songwriting. Melody wise, they’re in their own lane. Joni and Van, their freedom with melodies — it’s never quite what you thought was coming, yet it’s always so great.”

In 2020, Styles covered the Mitchell classic “Big Yellow Taxi” on the BBC’s Radio 2 breakfast show (you can watch the performance below).

That same year, he joined a roster of notable guests, including singer Brandi Carlile and comedian Ellen DeGeneres, at Mitchell’s Los Angeles home for a jam session.

“I had been doing these jams, these music moments with Joni over at her house,” Carlile noted once about the gatherings. “We get people together in the living room, around the instruments. We drink wine and we do music.”

Of course, Styles’ reverence for classic rockers is well documented. His friendship with Stevie Nicks, for example, dates back to 2015. The pair has performed together on stage multiple times — including when Styles inducted Nicks into the Rock and Roll Hall of Fame as a solo artist in 2019 — and Nicks has called Styles, “the son I never had.”

Styles also tapped Nicks’ former band mate Mick Fleetwood to be the face of his “Shroom Bloom” microcollection from his Pleasing skin care line, has repeatedly drawn fashion inspo from Mick Jagger and has openly declared how other music legends from previous generations have influenced his work, from Etta James to John Lennon and Yoko Ono, Paul McCartney, Paul Simon, Carole King, Elvis, Crosby, Stills and Nash and others.