Elton John Turns 75: Celebrate With 8 of the Rocketman’s Most Memorable Live Performances 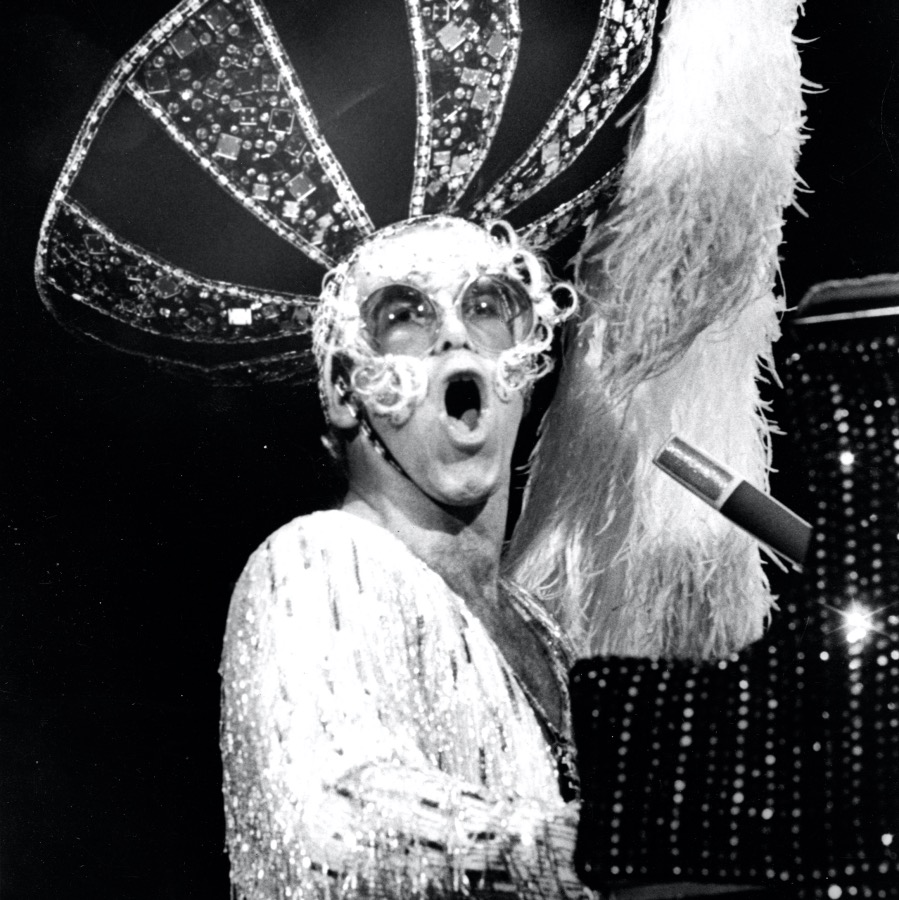 As Elton John, seen here in full costume during a 1974 concert, celebrates his 75th birthday, we revisit some of the live performances that earned him the reputation of one of rock and roll's greatest musicians and showmen. Photo: Don Preston/The Boston Globe via Getty Images

And while his list of musical hits is long and timeless, most Elton fans know that the best way to experience it is live. Ever the showman — not to mention a killer on the piano keys — Elton John’s concerts are not to be missed. So to celebrate his 75th birthday, we’re revisiting our story highlighting eight classic and memorable Elton John live performances.

On August 25, 1970, Elton John — then only 23 years old and barely known across the pond in America — walked onto the stage at the famed Troubadour club in Los Angeles before a packed crowd that featured luminaries like Gordon Lightfoot, Quincy Jones, Beach Boy Mike Love and Neil Diamond. From there, he took his seat and kicked off a seminal concert that helped launch him to superstardom in the United States and, soon after, around the world.

The Troubadour performance is a pivotal milestone in Elton John lore — one that showcased both his musical talents and also his showmanship. As an Ultimate Classic Rock piece about the Troubadour performance recalls, “Along the way, Elton was a force of nature on stage. At various points he kicked his piano bench over, fell to his knees and brought a ferocity to his songs that the American audience was not prepared for.”

And while no full-length video of that performance 52 years ago exists, there is a clip that exists of Elton playing “Sixty Years On” from the Troubadour below.

The Troubadour concert was recreated in the 2019 film Rocketman and remains Elton’s most famous early performance. But over the next five decades, the rocker went on to thrill millions during live shows around the world. From wearing full-on sequinned costumes on stage to stripped-down, more muted engagements, Elton remains one of the most incredible and versatile live performers in rock and roll history. And while his Farewell Yellow Brick Road retirement tour was temporarily interrupted by the COVID-19 pandemic, there are a plethora of Elton John performances from over the years to be found online — from his legendary Dodger Stadium show to hilarious television moments.

“Your Song” is arguably Elton’s signature tune, and according to the description of the video below on the singer’s YouTube page, this Top of the Pops performance at the BBC studios, alongside bassist Dee Murray and drummer Nigel Olssen, took place a week before the tune landed on the UK singles chart. It marked Elton’s debut on the chart — where the song remained for 10 weeks, eventually climbing to the seventh spot.

The Rocket Man launched into the rock and roll stratosphere following his performance at the Troubadour, and he flew high for the rest of the 1970s. His two-night engagement at Dodger Stadium in October of 1975, however, served as one of the pinnacles of his success. A career-defining pair of shows, Elton played to more than 100,000 fans over the two shows, famously taking the stage in a fitted, sequinned Los Angeles Dodgers uniform. Below, Elton and the band rock out to the classic “The Bitch is Back.”

Another classic from the Dodger Stadium concerts, “Pinball Wizard” — a Who tune that Elton covered and released as a hit single after performing it in the band’s film Tommy — was the show-closing number.

“Tiny Dancer,” Live in Australia with the Melbourne Symphony Orchestra (1986)

In December 1986, a month before undergoing throat surgery, Elton performed a series of shows throughout Australia and New Zealand. One show, in Sydney, was recorded for the double album Live in Australia with the Melbourne Symphony Orchestra and featured the singer decked out in a white tuxedo and Mozart wig. His raspy vocals only added soul and gravitas to the songs he performed and that, combined with the power of the orchestra behind him, resulted in one of the most powerful Elton concerts ever. You can check out individual videos of the songs he performed that night here.

In 1997, on a TV special called “An Audience with Elton John,” the singer played various hits while, in between songs, chatting with a crowd full of celebrities like David Copperfield, Claudia Schiffer and Ozzy Osbourne about his songs. At one point, actor Richard E. Grant notes the rocker’s reputation for taking lyrics and putting music to them quickly. As such, he hands Elton the instructions to his oven and asks him to put them to music. The result product is not only a hilarious and catchy tune, but also illustrates Elton’s innate talent for crafting a song.

Fifteen years ago Elton celebrated his 60th birthday with this show at Madison Square Garden in New York, which features a few famous friends who drop by to wish him a happy birthday including lyricist Bernie Taupin, Whoopi Goldberg and the late, great Robin Williams.

In August, 2015, Elton performed a headline set at San Francisco’s Outside Lands Festival. There’s nothing ground-breaking or landmark about the event, but the concert, which features a mix of his greatest hits and hidden gems off of classic albums, is remarkable for showcasing the incredible quality, endurance, and fun Elton still brings to live shows (especially considering he’s sung some of these songs thousands of times).

If you’re not familiar with “Carpool Karaoke,” a popular segment on The Late Late Show with James Corden, it’s a sketch where the host drives around in a car with a famous singer while belting out their greatest hits as cameras film the whole thing. In February 2016, Elton rode shotgun — feather boas and all — with Corden, crooning as they cruised the streets of L.A. It’s a fun ride and it proves just how versatile Elton is, as comfortable rocking a stage in the 1970s as he is decades later, delivering a passenger-side performance that proved a social media hit.

A version of this article was originally published on Aug. 25, 2020.