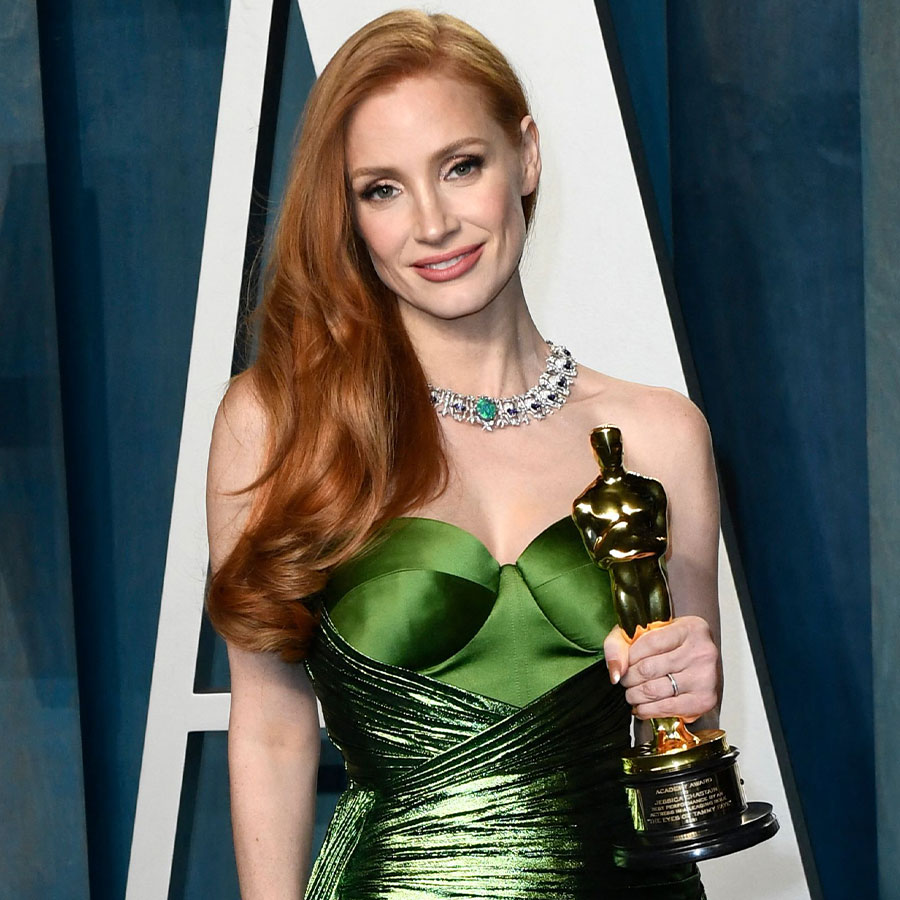 Jessica Chastain holds the award for Best Actress in a Leading Role for her performance in "The Eyes of Tammy Faye" as she attends the 2022 Vanity Fair Oscar Party following the 94th Oscars at the The Wallis Annenberg Center for the Performing Arts in Beverly Hills, California on March 27, 2022. Photo: Patrick T. Fallon/AFP/Getty Images

Nominated for The Eyes of Tammy Faye, Best Actress contender Chastain did wow ’70s glam to the red carpet: “To counter her [movie] look, she’s decided to go all-out sex bomb for Oscar,” a ‘fashion source’ told Page Six. At the after parties, Chastain opted for another stunning Gucci, but this time from another era, channeling old Hollywood à la Rita Hayworth.

The Hollywood legend and Knives Out star hit the Oscars in a glittering midnight blue mesh dress — and a blue ribbon on her finger in support of Ukraine refugees — and cheered on her goddaughter, Maggie Gyllenhaal, whose debut film, Lost Daughter, earned three nominations, Best Adapted Screenplay, Best Actress in a Lead Role, and Best Actress in a Supporting Role.

Dressed by Gandolf, er Dior, the New Zealand director wore a hooded hefty bag to the Oscars. But who cares — her latest film, The Power of the Dog, scored a DOZEN nominations — including Best Director. Campion won, making her only the third woman in the Academy’s 93-year history to take that prize and the second time she has won it.

Nominated for Best Supporting Actress for the iconic role of Anita in Steven Spielberg’s remake of West Side Story, DeBose made history as she won tonight — as the first Afro Latina and first openly queer woman of colour to win an Academy Award for acting. In 1962, Moreno was the first Latina to win an Oscar for her take on Anita in the original version of the musical, which is great symmetry, but also points out its been 60 years since a Latina won an acting role — and given that its for the same role, it shows a pointed dearth of them.

Best Actress nominee, for playing Lucille Ball in Being the Ricardos, the always flawless Aussie gave another master class in red-carpet dressing.

Co-host Hall was a stunner in a caramel Grecian goddess gown before her hilarious turn on stage.

The supermodel wowed in deep burgundy velvet, designed by Pieter Mulier who took over the house when its founder Azzedine Alaia died in 2017. Kebede was accessorized with CODA film producer, Philippe Rousselet who thanked her when his film won the most important award of the night, Best Picture.

Not nominated, but a former Best Supporting Actress winner — when she lit up the red carpet in Nairobi blue — the actress went on theme in this fringed gold frock ornamented with pretty pale flowers.

Nominated for Best Actress for Lost Daughter, Colman dazzled in pleated silver gown with dramatic sleeves with a dramatic beauty look — one of the evenings many nods to the glittering ’70s.

Accompanying her husband, whose film King Richard was up for five awards including his for Best Actor, the actress’s dramatic intense gown, with a mother of dragons vibe, was one of the night’s most show-stopping looks —and not just because of that other thing.

Up for Best Actress for her portrayal of Diana, Princess of Wales in the arthouse Spencer, and accompanied by her fiancée, Dylan Meyer, the Chanel ambassador’s hot pants tuxedo offered a non-traditional take on Oscar dressing. The opposite of the princess she played, Stewart changed into loafers the minute she was off the red carpet.

Diana’s daughter went with classic Louboutin pigalle follies stilettos, impressive diamonds, and a red-carpet red gown with a modern tea-length and a rather precarious bodice.

Nominated alongside her escort, Love Larson, for Best Makeup and Hairstyling for Dune, the Swede turned heads in a ball gown that featured a print of Madonna del Prato by Renaissance painter Raphael, which she accessorized with a handbag in the style of a sculpted bust. From Canadian director Denis Villeneuve, Dune was up for 10 Oscars, including Best Picture.

Circa ’70s. The SNL alum’s marabou-trimmed kaftan charted another disco-era look for the splashy evening.

The Emmy-winning Canadian comedienne swanned into the Vanity Fair‘s Oscar Party in a effervescent gown worthy of her winning red carpet record.

The Oscar-winning filmmaker was featured in the tribute to the 50th anniversary of The Godfather, directed by her father Francis Ford Coppola. (She notoriously starred in the much maligned The Godfather, Part III.)  Ever cool and classical, she chose a classic Chanel, having interned for the house when Karl Lagerfeld was the designer.

Snubbed for her turn in House of Gucci, Lady Gaga skipped the red carpet to attend her good pal Elton John’s annual AIDS Foundation bash instead. She later took the stage with the legend to present Best Picture wearing a ‘liquid lamé’ tuxedo pulled from her own closet that she’d wore to perform New York, New York, Minelli’s signature tune, at her Vegas residency. Minelli was applauded for her turn in Cabaret — celebrating its 50th anniversary — for which Minelli won the 1973 Oscar for Best Actress.

Accompanying her husband Javier Bardem, a Best Actor contender for Being the Ricardos, Cruz, who was nominated for Best Actress for her performance in Pedro Almodóvar’s Parallel Mothers, the house ambassador tied it up with a jewelled tweed-like bow. Both lost, but can take mutual solace in having won before.

The actress-director daughter of Quincy Jones and the Mod Squad‘s Peggy Lipton wore a signature look from the London cult label, which recently wowed on Kate Middleton during her controversial Caribbean tour. The label is designed by Susie Cave, wife of musician Nick Cave, whose son, by the way, is in love with Devon Ross — a Canadian model that Vogue has deemed the coolest.

The actress brought her daughter, Ariel, and her running shoes — a nod to her look for the 1985 Emmy’s — orange Reeboks and a velvet gown.

Opening the show live from Venus and Serena Williams’ hometown tennis courts in Compton, Bey performed her nominated song “Be Alive” from the biopic, King Richard, swathed in a tennis-ball green and yellow ensemble. She later changed into this on-message stunner with a jewelled tennis ball purse to match.

Co-starring in Belfast, which garnered seven Oscar nominations, including one for her in the Best-Supporting Actress category,  Dame Dench, who had previously won that award, walked the red carpet with grandson Sam Williams— her Tik Tok co-star.

Hollywood Moment: 12 Books To Read Before the Oscars