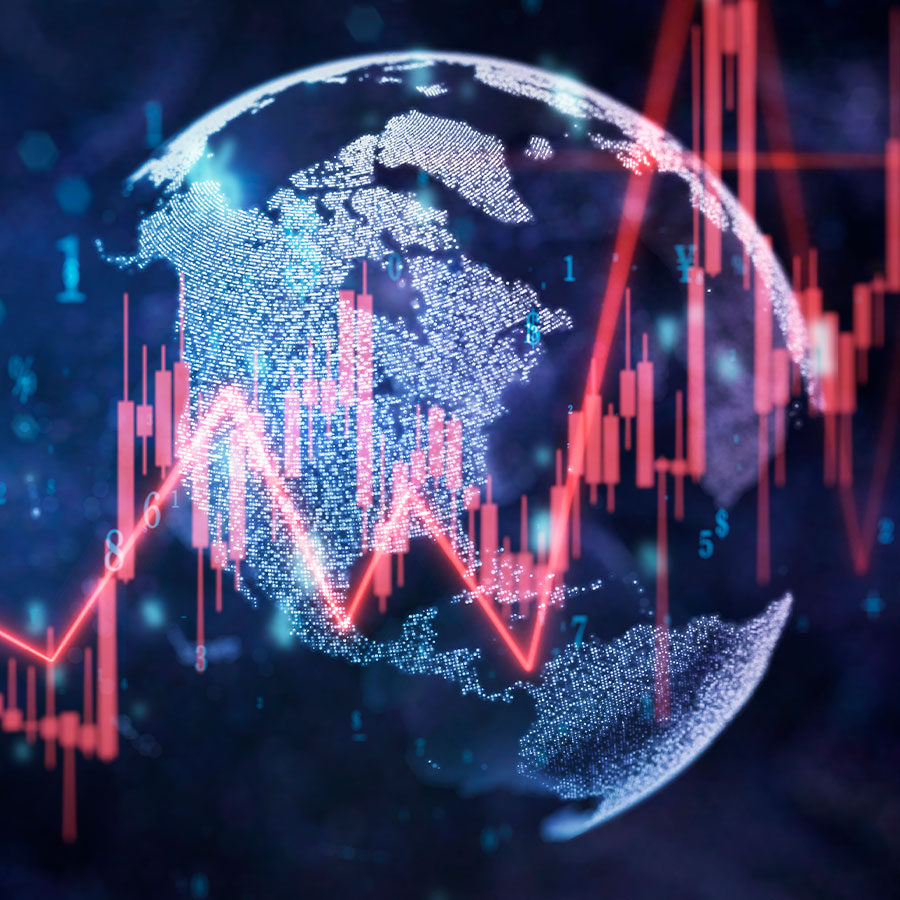 As Russia's invasion of Ukraine continues, we take a look at stocks that have minimal exposure to geopolitical fault lines. Photo: Yuichiro Chino/Getty Images

We’ve never seen this before: a two-year pandemic followed immediately by a shooting war in Europe involving a nuclear-armed nation.

It’s a situation no one expected. What do you do in a scenario no one could have imagined two years ago?

Start by taking a deep breath. Think about the probabilities of what the world will look like a year from now.

The worst-case scenario, obviously, is that everything goes completely mad, and we experience the ultimate nightmare: a nuclear exchange. If that horror should happen, your investments will be the least of your worries, assuming you survive at all. I think the odds of this are very low but Vladimir Putin’s rocket-rattling is unsettling.

More probably, and I say this with great sadness, I believe a year from now we’ll be facing a world in which Russia has taken control of a rebellious Ukraine and installed a puppet regime. The price Moscow will pay as a result of sanctions will be immense and a new Cold War will divide Europe.

Western governments will rapidly increase military spending. Traditionally neutral countries like Sweden and Finland will seek territorial guarantees. Russia will draw closer to China as its economy staggers under the weight of Western sanctions.

On the positive side, oil and gas prices should start to ease as the world adjusts to life without Russian energy. That will help relieve inflationary pressures and central banks may pause their interest rate increases. The economies of Canada, the U.S., and Europe should continue to rebound, with the help of public spending and new private sector investments.

With this in mind, take a fresh look at your portfolio. You may want to make some tweaks, such as adding exposure to defense stocks and natural resources. But the main emphasis should be on protecting capital. That means focusing on stocks that have minimal exposure to geopolitical fault lines. Here are four sectors to consider.

Utilities. Most of their income is regulated and guaranteed through long-term fixed rate contracts. Revenues are stable and much of their income is inflation-protected. They are not exposed to geopolitical upheavals. That’s why the S&P/TSX Capped Utilities Index is up 4.28 per cent for the month of March. Stocks I like include Fortis (TSX: FTS), Emera (TSX: EMA), and Canadian Utilities (TSX: CU).

Telecoms: The same argument can be made for telecommunications companies. Their revenue is stable and, for the most part, predictable. Their business is not threatened by foreign wars. Like utilities, these companies pay healthy dividends, which are regularly increased. The S&P/TSX Communication Services Index is ahead 4.54 per cent this month. My favourite stocks are BCE (TSX: BCE) and Telus (TSX: T).

Renewable energy: This sector was battered after being overbought in 2020 and early 2021. It’s slowly turning around now as investors realize that energy generated by domestic wind, hydro, or solar power is not exposed to geopolitics, except to the extent their cost becomes more competitive as oil and gas prices rise. The S&P/TSX Renewable Energy and Clean Technology Index is up about 2 per cent so far in March after losing about a quarter of its value in the past year. I like Brookfield Renewable Partners (TSX: BEP.UN) and Algonquin Power and Utilities (TSX: AQN).

Pipelines: Russia’s new energy link to Europe, Nordstream 2, now looks like it may be doomed to rust away under the Baltic Sea. But North American pipeline companies are an excellent defensive choice. Despite a recent pull-back, TC Energy (TSX: TRP) is up almost 17 per cent year-to-date. Enbridge (TSX: ENB) has gained about 14 per cent. Pembina Pipeline is up 21 per cent.

Short of Armageddon, all these stocks will limit downside risk and provide cash flow in these unpredictable times. Check your portfolio.

Career: How 3 Canadians Found Deeper Meaning in Their Work Lives