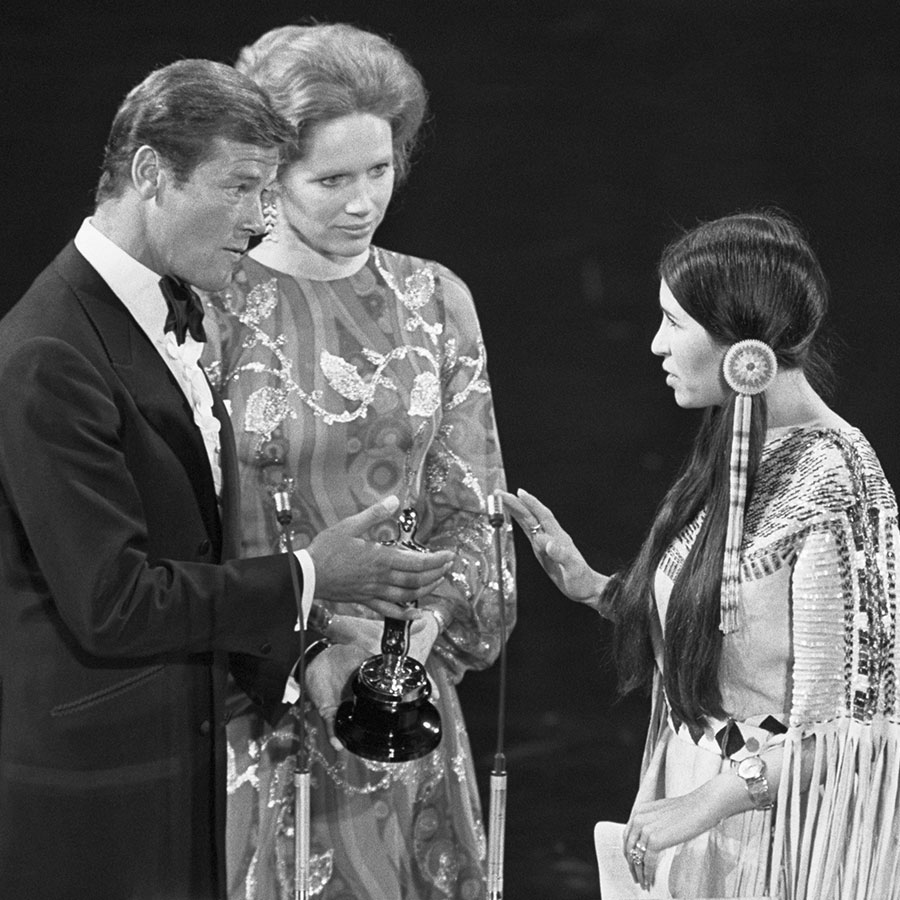 Sacheen Littlefeather appeared at the 1973 Academy Awards on behalf of Marlon Brando and, in an Oscars first, refused the award for Best Actor for his role in 'The Godfather' on his behalf. As presenters Roger Moore and Liv Ullmann looked on, Littlefeather delivered Brando's address, explaining he refused the award in protest of the treatment of Indigenous people in Hollywood and in the U.S. as a whole. Photo: Bettmann/Getty Images

Will Smith, 53, slapping Chris Rock, 57 — live on stage after Rock made a joke about Smith’s wife Jada Pinkett Smith — and then being allowed to return to his seat and eventually receive an award, underscored that fact in bold.

Never mind that many of the same “woke” celebs who take political stands against violence, bigotry and wars that occur outside of the Dolby Theatre, where the Oscars were held, had no problem cheering for Smith when he later received his Best Actor Oscar and laughingly claimed to want to be a “vessel of love.”

Smith, in fact, was embraced after the slap by celebs like Bradley Cooper and was seen dancing and rapping at the Vanity Fair afterparty like someone who didn’t just get away with blatant assault in front of millions of viewers.

But he did get away with it — and an Oscar — at least for now. While the LAPD noted that Rock didn’t press charges against Smith, on Monday the Academy of Motion Pictures Arts and Sciences, which runs the Oscars, eventually released a statement condemning Smith’s actions and announcing a formal review that “will explore further action and consequences in accordance with our bylaws, standards of conduct and California law.”

Smith followed that with an apology of his own Monday night, acknowledging his behaviour as “unacceptable and inexcusable” and adding “I would like to publicly apologize to you, Chris. I was out of line and I was wrong. I am embarrassed and my actions were not indicative of the man I want to be. There is no place for violence in a world of love and kindness.”

Still, the 94th Academy Awards delivered more than its fair share of WTF moments. How about the COVID testing sketch that saw Oscars co-host Regina Hall call on Bradley Cooper, Timothée Chalamet, Tyler Perry and Canuck Simu Liu to join her backstage where she would perform a “deep PCR” test and “swab the back of your mouth with my tongue,” before patting down Josh Brolin and Jason Momoa? The cringe-worthy bit left many viewers uncomfortable and asking how acceptable the whole schtick would have been if it were a male host accosting female celebs.

At other points in the show, the Oscars variously received criticism for setting the In Memoriam segment to an upbeat song; for playing “Africa” by Toto as two Black entertainers, R&B singer H.E.R. and actor Daniel Kaluuya, took the stage; and for forgetting to include actor George Lazenby’s name in the mentions of James Bond actors during the 007 tribute.

Of course, award shows — and particularly the Oscars — have a history of moments that leave you wondering “what just happened?” Here, we look back at a few of the most memorable.

Marlon Brando was ahead of his time in using his platform at the Oscars to make a statement for a good cause.

Brando refused to attend the 45th Academy Awards in 1973 out of protest over the treatment of Indigenous Americans in both Hollywood and at Wounded Knee — the occupation protest in South Dakota occurring at the time, during which hundreds of Indigenous protesters demanded that the American government honour historical treaties.

Instead, Brando asked actress, activist and then-president of the National Native American Affirmative Image Committee Sacheen Littlefeather to appear on his behalf.

So when Brando won the Oscar for Best Actor for his role as Vito Corleone in The Godfather, Littlefeather refused it on his behalf and delivered a speech where she noted, “the reasons for this being are the treatment of American Indians today by the film industry … and on television in movie reruns, and also with recent happenings at Wounded Knee. I beg at this time that I have not intruded upon this evening, and that we will in the future, our hearts and our understandings will meet with love and generosity. Thank you on behalf of Marlon Brando.”

Littlefeather’s comments were met with a mix of cheers and jeers, and Brando himself later stated his regret that he didn’t attend, thus allowing Littlefeather to take the brunt of the fallout.

“I was distressed that people should have booed and whistled and stomped, even though perhaps it was directed at myself,” he later told Dick Cavett. “They should have at least had the courtesy to listen to her.”

One of the most famous spontaneous Oscars moments in history saw a streaker named Robert Opel run naked behind host David Niven during the 46th Academy Awards in 1974. As Niven was preparing to introduce Elizabeth Taylor, Opel ran out in the buff and flashed the peace sign as he crossed the stage.

Niven’s now classic response — “Isn’t it fascinating to think that probably the only laugh that man will ever get in life is by stripping off and showing his shortcomings?” — is forever part of Oscar lore, though some question whether the whole stunt was planned in advance. Niven’s retort was pretty quick, and the band happily played music after the streak. And, as you can see by the above clip, the Academy uploaded the whole incident to its own YouTube page.

So was it a real spontaneous moment, or was the streak planned? That’s up to you to decide.

Imagine being part of an Oscars skit that is so universally reviled that, as The Hollywood Reporter recalled, “17 Hollywood heavyweights — among them Paul Newman, Gregory Peck, Julie Andrews and Billy Wilder — signed an open letter deriding the telecast as ‘an embarrassment to both the Academy and the entire motion picture industry.’”

The 61st Academy Awards in 1989 may have benefitted from a Will Smith slap for no other reason than to distract from the disastrous opening dance number highlighted (or low lighted, depending on your take) by a dancing, singing Snow White performing a re-written, Hollywood-themed rendition of “Proud Mary” with lines like, “I used to work a lot for Walt Disney, starring in cartoons every night and day.”

Snow White’s singing Prince Charming on this night was played by a 24-year-old Rob Lowe, who left no doubt by skit’s end that he was neither a singer nor charming while trying to hook up with a Disney princess. To make matters worse, ABC, which aired the Oscars, didn’t secure the rights to use the House of Mouse’s characters, leading to a lawsuit.

Ultimately, though, the man who produced the show, Allan Carr — who’d also produced the film Grease — took the worst of the fallout. THR noted that, following this Oscars broadcast, “Carr, hurting from back-to-back flops Can’t Stop the Music and Grease 2, never worked in Hollywood again.”

However, looking back on the evening with the New York Times, Lowe recounted a special moment he shared with a Hollywood legend following the skit.

“I got to the green room and Lucille Ball told me she didn’t know I was such a good singer and made me sit next to her and hold her hand and watch the next 20 minutes of the Oscars,” he explained. “That ended up being my all-time favourite memory because a lot of people didn’t like it, but Lucy did. If it made Lucy happy, it made me happy, because I love Lucy.”

The year 2013 was a time when royal watchers celebrated the birth of the future King George, Canadians cheered Chris Hadfield as the first Canuck to command the International Space Station and you couldn’t escape the song “Let It Go” from Frozen no matter how hard you tried.

The tune, in fact, won the Oscar for Best Original Song at the 86th Academy Awards that year — an honour that was arguably overshadowed at the event by actor John Travolta’s botched introduction of the singer who performed it.

In introducing Idina Menzel, who performed the song, Travolta, in fact, said the name Adele Dazeem, leaving many fans perplexed. Travolta, later, blamed a rush to the stage and a phonetic spelling of Menzel’s name given to him to read as the reason he flubbed it.

But Travolta apologized and Menzel clearly forgave him. At the Academy Awards the following year, Menzel introduced Travolta as “Glom Gazingo.”

Ever wondered what it would look like to see time stand still?

Watch the clip below from the 89th Academy Awards in 2017, when Warren Beatty and Faye Dunaway introduce La La Land as the Best Picture winner.

Then watch the whole La La Land gang take the stage and begin giving acceptance speeches, clutching the little gold statuettes as though their whole life had led them to this triumphant moment. A graphic even appears on the screen with the names of the producers and the film, accompanied by the words “Best Picture.”

Then, after a few joyful moments, watch the Academy producers in headsets, and Beatty himself, begin to infiltrate the La La Land crew, live on stage, as the acceptance speeches are still going. As La La Land producer Marc Platt delivers his speech, the news slowly trickles through the gathered gang behind him that, in fact, there’s been a mistake. Then they begin taking the statuettes away from the La La Land folks.

Finally, another of the film’s producers, Jordan Horowitz, gets to the mic to announce the mistake, and time stands still. Is this a joke? How could this happen? Moonlight is the real winner?

Yes, it’s one of the most famous botches in award show history, chalked up to the wrong card being handed to Beatty and Dunaway to read. But, thankfully, the La La Land team were nothing but graceful in their heartbreak and the Moonlight team (eventually) had the opportunity to take the Oscar stage triumphantly.

The moment got a call back this year, following Will Smith taking the stage to slap Chris rock live at the Oscars. Isabel Beatty, daughter of Warren Beatty and Annette Bening, tweeted during the event, “yes this is more unhinged than my dads moment, no debate.”