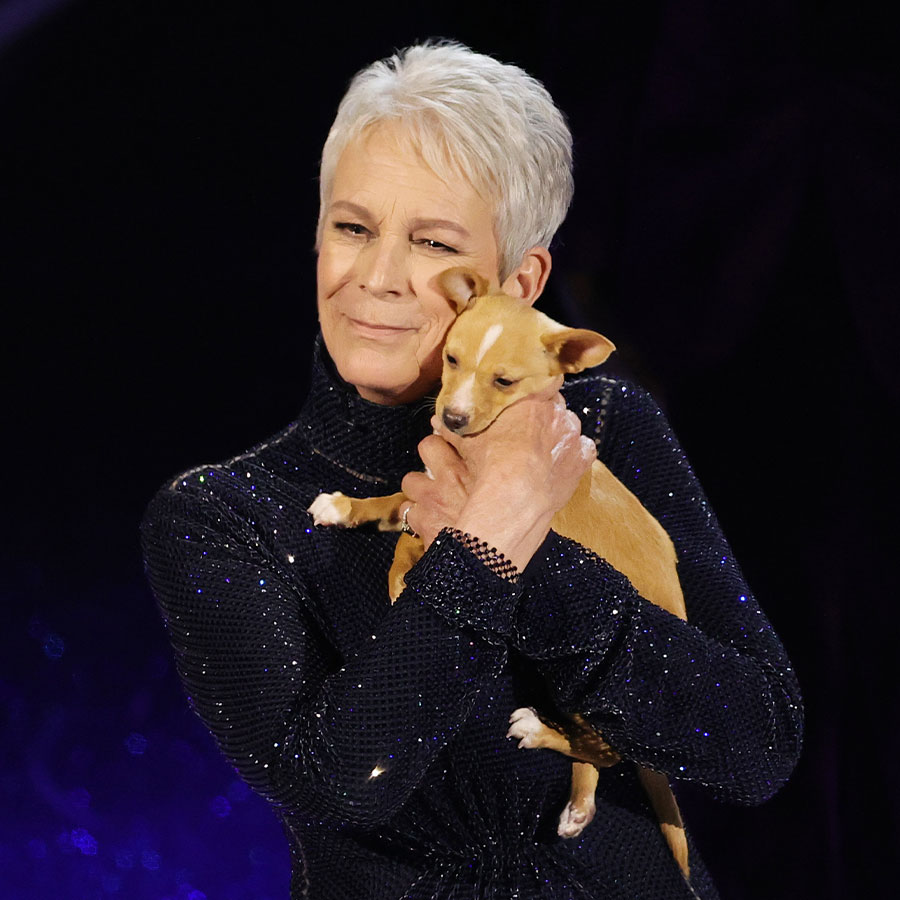 Jamie Lee Curtis took to Instagram on Monday to announce Mac & Cheese, the dog she brought on the Oscars stage during her Betty White tribute (pictured above), had been adopted by John Travolta. Photo: Neilson Barnard/Getty Images

Following all the Oscars controversy on Sunday night, Jamie Lee Curtis, 63, provided a much-needed shot of positivity this week when she announced that the rescue dog that accompanied her on stage during her In Memoriam tribute to Betty White had been adopted by fellow actor and Perfect co-star John Travolta and his 8-year-old son, Ben.

“A magical ending to the story from last night,” she said along with a photo of Travolta, 68, his son Ben and the pup, named Mac & Cheese. “I had already left the Dolby Theater last night after honouring Betty White and was on my way home when someone texted me a photo of John holding little mac & cheese in the green room before his presentation of the best actor Oscar. I thought it was so beautiful to see him with her and then today I found out that he and his son, Ben have adopted beautiful little mac & cheese and are taking her home today.”

“It is an emotional end and a perfect tribute to Betty White,” she added.

Travolta also shared the sweet snap on Instagram, thanking Curtis and Paw Works, the rescue organization, for the new addition to their family.

For Curtis’ tribute to the legendary Golden Girl, she spoke not only of White’s legacy as an actress, but also of her well-known commitment to animal welfare, which was exemplified by both her support of animal charities and the adoption of several dogs during her lifetime.

“She was not only a Golden Girl, she was a legend who brightened every room she walked in and brought a smile to the faces of all who watched her on the screen,” Curtis said on stage while holding Mac & Cheese. “And day in and day out for almost a century, she was a woman who cared so much for not just her two-legged friends but for animals just like this.

“The greatest gift you could give Betty White is to open your heart and your home and adopt a rescue dog just like Mac & Cheese from Paw Works. So thank you, Betty. Thank you for being a friend to us all.”

White’s legacy of kindness toward animals has made a tremendous impact since her death this past New Year’s eve at the age of 99. In honour of what would have been her 100th birthday on Jan. 17, fans created the #BettyWhiteChallenge, a social media movement calling for $5 donations to local animal rescues and non-profits in her honour. The challenge spurred an influx of donations both in the U.S and in Canada, including over US$90,000 in donations to GLAZA, the charity arm of the Los Angeles Zoo, and $120,000 to the Ontario Society for the Prevention of Cruelty to Animals and Humane Society made in White’s name.

White even considered a career closely aligned with her passion for animals. Before she caught the acting bug, she was eager to become a forest ranger or a zookeeper. Unfortunately, women were excluded from those professions at the time.

So instead, White used her influence as a celebrity to feed her passion for animal advocacy.

In addition to her support of countless animal charities — from those tackling the abuse of animals to animal health research — she became a member of the board at the Los Angeles Zoo, where she helped facilitate the addition of state-of-the-art chimpanzee, orangutan and gorilla exhibits.

For the screen star, her work in service of animals was just as important as her career in television.

“I’m the luckiest person in the world — my life is divided in absolute half: half animals, half show business,” she once told TV Guide.

And White also credited her longevity to a valuable lesson she learned from her four-legged friends.

“I’m not preaching, but maybe I learned it from my animal friends: kindness and consideration for somebody besides yourself,” she told CBS Sunday Morning in a 2011 interview. “And I think that keeps you feeling young, I really do.”