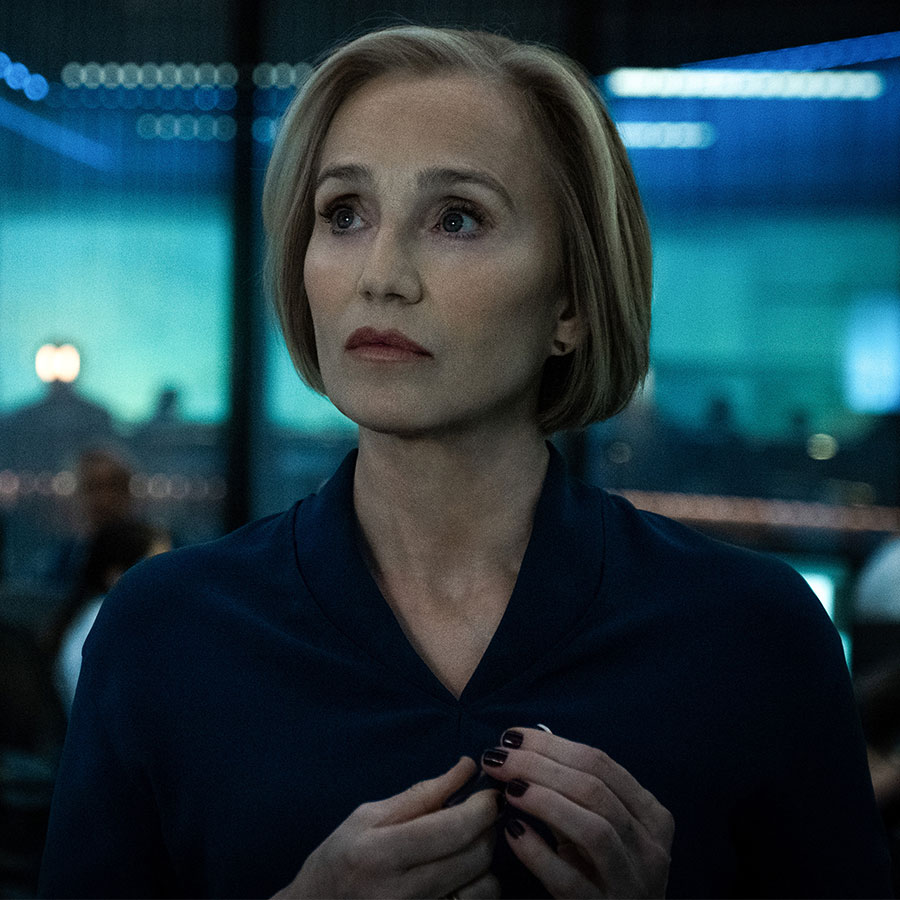 Early in her career, Kristin Scott Thomas made a lasting impression as the cool, poised Fiona in Four Weddings and a Funeral before moving on to her Oscar-nominated role in The English Patient and playing an aloof 1930s socialite in Gosford Park.

Elsewhere, she’s won acclaim for appearing in everything from French art-house films to Chekhov and Pinter plays — not to mention the occasional one-off cameo. Case in point: her memorable cameo on Fleabag in which she delivers a bracing monologue about female pain and menopause that’s so epic, it’s still being memed.

As Scott Thomas, 61, told the Guardian early in COVID’s first lockdown, much as she was initially enjoying staying put — taking a turn in the BBC’s new versions of Alan Bennett’s Talking Heads monologue series, and puttering with her newfound hobby of vegetable gardening — the pandemic isolation had her longing for action and adventure.

She found it in the new spy-thriller series Slow Horses (which premiered exclusively on AppleTV+ on April 1), adapted by Emmy-winning Veep writer Will Smith from award-winning espionage thrillers by British author Mick Herron. In the series, the Cornwall-born actress plays Diana Taverner, formidable number two at MI5 who is as ruthless as she is ambitious. Her character wears her experience garnered in the waning days of the Cold War as proudly as the actress now sports the natural streaks of grey in her formerly brunette and still-immaculate coif.

What appealed about the project straight off was how well-written the show was, even in “very, very, very, early drafts,” Scott Thomas explains in a recent Zoom interview. And while she didn’t pursue the role (in the way she did that of Daphne du Maurier’s icy obsessive housekeeper Mrs. Danvers in Ben Wheatley’s Netflix adaptation of Rebecca), she was easily persuaded to join the series.

And once it became known in her circle that she was considering joining the popular spy series on screen, “Everyone was ringing up: ‘You’re going to play Diana Taverner? It’s amazing!’

“So that was, you know, exciting. That’ll do it,” she says with a chuckle. “A little bit of peer pressure and I’m anyone’s!”

(The books have many fans — including Mick Jagger, who co-wrote and sings the series theme with lyrics from the perspective of the characters; his moody, catchy new theme song is also being released as a single.)

Knowing that Gary Oldman — whom she starred alongside as Clementine Churchill to his Winston Churchill (for which he won the Best Actor Oscar) in the 2017 film Darkest Hour — was involved was a huge draw as well. Oldman, 64, stars in the series as Jackson Lamb, the caustic and wily senior agent who oversees a band of disgraced British intelligence agents that include those played by Jack Lowden, Olivia Cook, and Saskia Reeves — all so-called slow horses. The Oscar winner plays their slovenly leader with Falstaffian abandon (and hilariously emphatic flatulence) and is Taverner’s frequent sparring partner.

“Gary is an extraordinary actor and he’s also a huge, huge kind of presence in our world, the world of entertainment,” she says, explaining how a co-star’s long and acclaimed career can loom large. “There would have been a time in my life when I would have been very afraid of that. But he’s a very quiet man, he’s not bombastic — he’s very, the French would say ‘discret’  [understated] — he just sort of keeps himself to himself.”

In scenes where Taverner and Lamb match mettle, there’s a delicious energy in the friction of their adversarial relationship. You either have the click of chemistry with other actors, Scott Thomas says, or you don’t — and she and Oldman do. Their rapport from Darkest Hour carried over “from door-to-door, so to speak.”

The setting is the labyrinthine world of domestic counter-intelligence familiar from John le Carré, but is also a gallows humour workplace comedy. Emphasis on the gallows: imagine the biting satire of The Thick of It by way of Three Days of the Condor, exploring political corruption, authoritarianism and the rise of nationalist movements.

“I think it’s very important to bring these things into entertainment because entertainment is the soft power, it’s the way of getting people to think in a different way,” Scott Thomas says of the subject matter.

Unlike the often-improbable globe-trotting triumphs of a James Bond or Mission: Impossible, Slow Horses emphasizes the drudge work and the very real possibility of failure. “That, I think, it’s a very British sensitivity, this sort of self-mockery. And what we enjoy in this part of the world is pulling the rug out from underneath each other’s feet,” she says of the misfits who think outside the box, but don’t always succeed against the odds. “I think people have always liked the underdog. So the slow horses are the last in the race, they’re the ones that come up last, that limp home — and I think that it’s sort of encouraging.”

Slough House — the grubby headquarters of their banishment — certainly looks the part under bilious layers of grime and years of neglect.

The team’s adventures are evocatively conjured in a mostly nocturnal London of grubby all-night Chinese takeaway joints and sallow hues of sodium vapour lighting. Even in squalor, it’s gorgeous.

Fusing action, intrigue and humour, Slow Horses covers a lot of ground and it’s also “just beautifully made,” she boasts. “It’s what Britain does best. We make great television in this country and we have done so for decades.”

In a behind-the-scenes teaser video, Oldman points out that Scott Thomas is good at playing “a tough cookie.” When Kristin walks in as Diana Taverner, “everybody stands to attention. All the scenes she’s in just have an extra edge,” is how series director James Hawes (Snowpiercer, The Alienist) puts it.

Throughout her career, Scott Thomas does seem to have specialized in finding the fragility beneath the outward frost, perhaps at its most nuanced in Taverner. I ask if there were particular cues or even real-life figures (like Dame Stella Rimington, the first female director-general of MI5) that contributed to her interpretation.

“In a way the book sort of dissects acting,” she says of the character’s internal monologues and many “little foibles,” like applying lip balm to gird herself before confrontation. “What really struck me was how obsessed she is with the mask. With her appearance, with her armour, with her looking absolutely impeccable and not a hair out of place. That kind of thing I think isn’t just about the way she looks, it’s about the way she carries herself. Her power is held in her backbone and she’s a really strong woman and she is going to display that strength by this, her outward appearance.

“I think that’s an interesting thing for a writer to observe,” she continues. “And of course that aspect of it is crying out for a film!” Then, she adds with a laugh, “And a good designer and a friendly camera.”

Slow Horses premiered on AppleTV+ Friday, April 1 with the first two episodes, followed by a new episode every Friday.