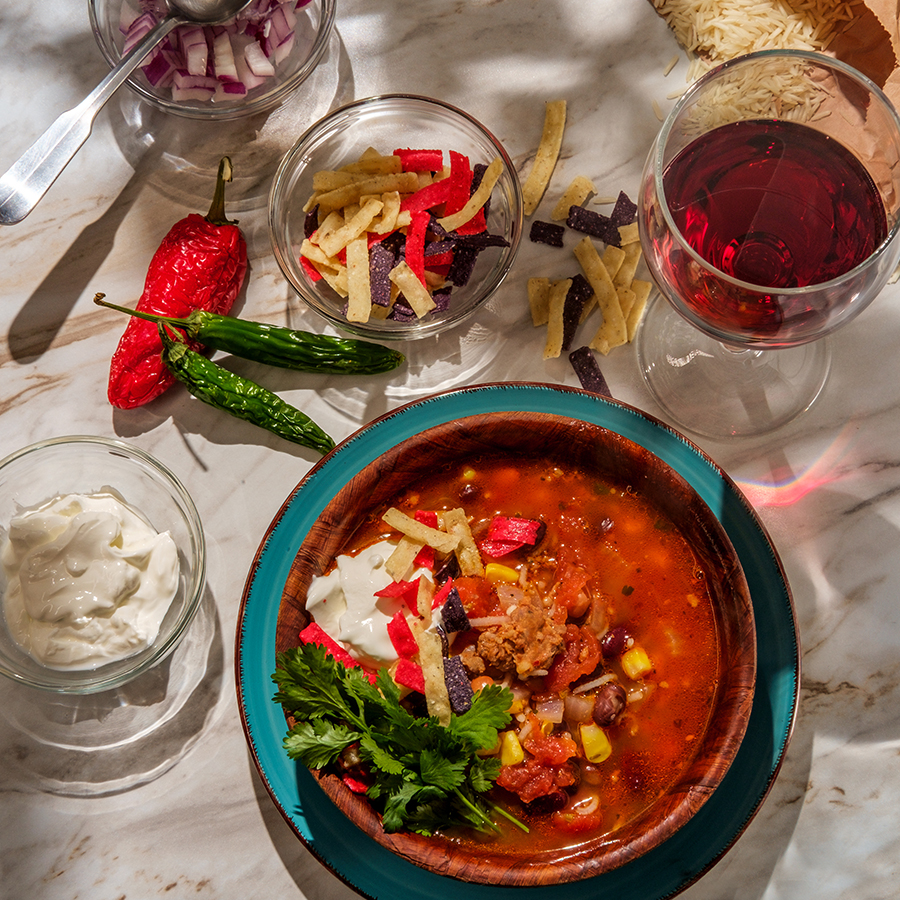 A drama, a guilty pleasure and a classic coming of age dramedy round out our picks for this week's wine and watch. Photo: EzumeImages/Getty Images

Freshly Corked: A Buzzy Film Paired with Something Bubbly

Film: The Father. Anthony Hopkins deservedly won the best actor Oscar — at age 83, the oldest ever to do so — as a man sliding into the cruel abyss of dementia in this absorbing entry from 2021 co-starring Olivia Colman, Rufus Sewell, and Imogen Poots. Though, as England’s The Guardian correctly pointed out, you’d never guess this film was a heartbreaking drama based on its weirdly cheery and misleading posters.

Indulgent and/or Wallet-friendly: Pink Prosecco. The manufacture of Italian sparkling pink wine wouldn’t seem a big deal but, for years, it was not officially sanctioned. That changed in 2020, when the Prosecco DOC Consortium announced its updated rules for production, including the introduction of Prosecco DOC Rosé. As TimeOut notes, “Prosecco DOC comes exclusively from nine provinces in ‘the area of north east Italy lying between the Dolomites and the Adriatic Sea.’ There are rules about how the drink can be produced. Like standard prosecco, the new rosé variety must be made with primarily Glera grapes [and] it must be ‘pink more or less intense, shining, and with a persistent foam.’” That works for me. Ruffino Prosecco Rose DOC is widely available across Canada for under $20.

Snack options: Salted, buttery popcorn. An obvious choice for film snacking, but as noted in this space before, bubbles provide an excellent counter to fat and salt. A shake or two of Parmesan cheese or splash of truffle oil never hurt a bowl of popcorn, either.

Film: Little Italy. Normally with this column, we strive to promote good stuff that should be seen, possibly even more than once. But sometimes, as the saying goes, films are so bad they’re good, which makes them kind of fun to watch. Granted, Little Italy is weakly plotted, rife with obvious product placements, teeming with accents of ambiguous provenance, and steeped in lazy Italian stereotypes of the eye-rolling variety (pinched cheeks, “bella you should eat” sort of dialogue, etc.).

But it does feature a surprisingly watchable cast — Emma Roberts, Hayden Christensen, Alyssa Milano, Andrea Martin, Jane Seymour, and the late Danny Aiello in his final film appearance — while offering Torontonians an opportunity to play a game of spot-the-location. Come for the trainwreck, stay for the unintentional comedy.

Indulgent and/or Wallet-friendly: Gamay Noir. This lightly tannic, dry, light-bodied red drinks a bit like Pinot Noir, though in France, Gamay mainly hails from the Beaujolais region to Pinot’s Burgundy. Yet it is consistently easier on the wallet. You may have already tried Gamay without knowing it; it’s commonly used in rosé blends. But it’s also widely grown in Ontario’s Niagara Region and bottled as a stand-alone varietal. Like Pinot Noir and Chianti, Gamay can be slightly chilled which makes it a nice red option for warmer months.

Vintage: A Nostalgic Film With a Wine to Match

Film: Y tu mamá también, from 2001, was perhaps the mainstream’s first alert that Mexican director Alfonso Cuarón (see also Roma, Gravity, Harry Potter and the Prisoner of Azkaban) was a major filmic force on the ascent. Ditto Gael García Bernal who, with Y tu co-stars Diego Luna and Maribel Verdú, helped turn this nominal road movie-slash-coming of age dramedy into one of the most watchable films of its decade. Mexican cinema is frequently amazing if seldom considered. For every offering by marquee directors like Michel Franco, Alejandro González Iñárritu, and Guillermo del Toro, there are smaller gems to unearth, many elevated by incisive commentary on Mexico’s precarious social order. Recent titles of this ilk include director Fernanda Valadez’s haunting and highly recommended Identifying Features from 2020, actor-cum-director Bernal’s most recent, the disquieting teen-led drama Chicuarotes from 2019, as well as 2021’s quasi-doc, Una película de policías from director Alonso Ruizpalacios.

Indulgent and/or Wallet-friendly: Carménère. Its origins may be French but these days, this lively, slightly peppery, dark-hued red hails primarily from Chile — which means it offers good bang for the buck. Distantly related to Merlot, and accidentally cultivated as such for many years, Carménère is sometimes used in red blends but is available as a single varietal and is buoyed by toasty notes of cherry and currants. Given the film choice, I wish I could recommend a Mexican wine but, alas, they are virtually impossible to find in Canada.

Snack options: Like most medium bodied reds, Carménère is very versatile, complementing almost any cheese from buttery (like Brie) to salty (like Manchego) as well as anything starring exotic or umami spices (think cardamom, cumin, turmeric). Homemade chilli with lots of spices and beans would work nicely.