After The Ricardos: Lucie Arnaz Talks the Post-‘I Love Lucy’ Lives of Her Parents, Lucille Ball and Desi Arnaz 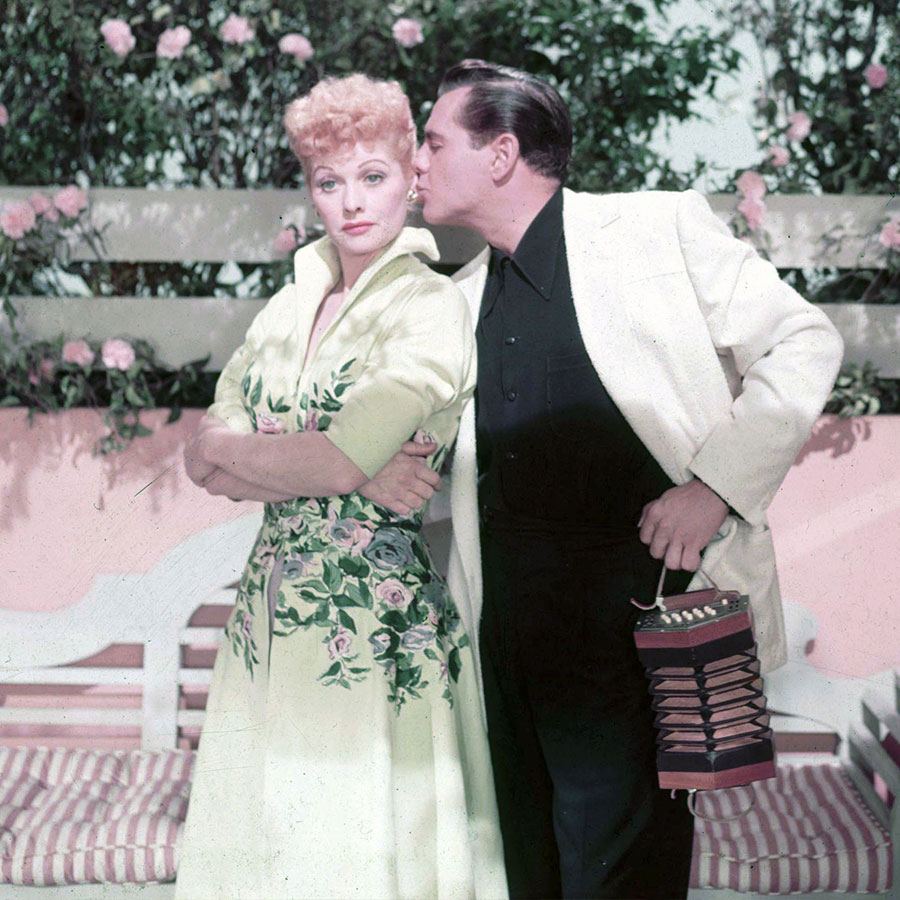 Lucille Ball and Desi Arnaz, pictured in 1955. While the Oscar-nominated film 'Being the Ricardos' follows the couple's life during a tumultuous week of filming 'I Love Lucy,' the pair's personal and professional lives continued to flourish long after the timeline depicted in the movie. Photo: Archive Photos/Getty Images

They might have left the 94th Academy Awards ceremony in March empty-handed, but the images Nicole Kidman, Javier Bardem and J.K. Simmons created of Lucille Ball, Desi Arnaz and William Frawley respectively in the film Being the Ricardos will endure.

Written and directed by Aaron Sorkin and streaming now on Prime Video, Being the Ricardos explores Ball and Arnaz’s often-tempestuous relationship through the lens of one production week on the pioneering sitcom I Love Lucy.

The film leaves viewers with the note that the iconic couple divorced in 1960. But for Ball, then 48, and Arnaz, 43, some of their greatest personal and professional successes were just around the corner.

Sixty years ago this fall, Lucille Ball made her triumphant return to television in The Lucy Show, a sitcom which ran from 1962 — 1968 and saw the legendary comedienne re-team with her long-time sidekick Vivian Vance. Ball played Lucy Carmichael, a widowed mother of two children sharing a home with Vivian Bagley, television’s first divorcee co-lead character, who was raising a son of her own.

The series garnered Ball her final two competitive Emmy Awards in 1967 and 1968, all as she juggled her role as the first female head of a major Hollywood studio — Desilu.

Ball took the helm of the company she co-founded with Arnaz after buying him out in 1962 and, under her tenure, the studio reached its zenith with such shows as Mission: Impossible, Mannix and a little series called Star Trek.

“She became the ‘First Lady of Television’ and she was revered,” says Tom Gilbert, co-author of the book Desilu. “The romance of Lucy and Desi might have longer appeal [to audiences] but The Lucy Show and Here’s Lucy (which ran on CBS from 1968 – 1974) were in the Top 10 until the last two seasons of Here’s Lucy.”

He adds that, while people enjoyed watching Ball in her various sitcoms, the actress herself often said, “We could never top what we’ve done” with I Love Lucy.

“It was evident from her Emmy acceptance speech in 1967 that she was really thrown,” Gilbert says. “I think it validated her and it also made her feel like what she had been doing was worthwhile.”

Ball, he notes, cited her divorce from Arnaz as her greatest personal failure. Though in many ways, their split allowed the pair to lead new, fulfilling lives.

“I wish they had gotten divorced a little sooner so we could all have been happier longer,” actress-singer Lucie Arnaz, who was born to Lucy and Desi in 1951, says.

“My parents were caretakers in that they had to take care of their families after tragedy struck — both of them,” she adds. “I can just imagine them at their first dinner exchanging stories about growing up, why they ended up there, and saying, ‘That happened to you, too?’ or ‘You have no idea! Wait until you hear what they did to my grandfather!’”

In her youth, Ball’s close-knit family circle was upended after a tragic accident. While Lucy’s grandfather supervised her younger brother, Fred, and his friends in a round of target practice in their backyard, a neighbour boy dashed across the makeshift firing range at just the wrong moment. A stray bullet fired by one of the children left him paralyzed and Ball’s grandfather was held responsible. He lost nearly everything and it was left to Ball, she felt, to make good and bring the family back together.

Meanwhile, Arnaz’s politically-prominent family lost it all in the Cuban Revolution of 1933. He then fled to Miami with just pennies in his pocket and rebuilt his life by finding ways to support his family through several odd jobs — including cleaning canary cages in a pet store — before his musical talent brought him to New York nightclubs, Broadway and, eventually, Hollywood.

“They both came out of enormous trauma and ended up having to take care of their parents, grandparents, and all these people. They became caretakers when they had nothing to give them, but they were still the people responsible,” Arnaz says. “When they met each other, they recognized that, but if you’re a caretaker most of your life, what you’re dreaming about is somebody to finally take care of you.”

Both Ball and Arnaz may have found just that in their second spouses.

Ball met comedian Gary Morton during the run of her Broadway debut in the 1960 musical Wildcat, and the couple wed the following year.

Arnaz, in turn, found contentment with Edith (Edie) Mack Hirsch, a long-time friend of the family whom he married in 1963.

While Gary Morton, who died in 1999, has been on the receiving end of criticism by some of his wife’s friends and biographers in recent years, particularly regarding his lacklustre business acumen as compared to the genius of Desi Arnaz — a man Morton jokingly referred to as his “husband-in-law” — his stepdaughter holds a very different perspective on what went on behind closed doors.

“People have no idea how much my mother loved Gary and how deeply he adored her,” says Lucie Arnaz. “He made her laugh 24-hours-a-day, he never screwed around, he never made her worry about where he was. He was happy to be golfing and buying old cars to fix up. He was a good husband to her. He was. The rest of it is probably just personality friction with other people.”

At the same time, Arnaz was nearing another crossroads. After selling his stake of the Desilu studio to his ex-wife, he devoted much of his time to horse-breeding and racing. Still, he never strayed too far from the medium that made him a household name. He helmed the early episodes of The Lucy Show as executive producer, made several television guest shots, hosted Saturday Night Live in its inaugural season in 1976 and landed his final television hit in 1967 — producing the Eve Arden-Kaye Ballard sitcom The Mothers-in-Law, created by original I Love Lucy scribes Bob Carroll, Jr., and Madelyn Pugh Davis.

His relationship with Hirsch, who stepdaughter Lucie Arnaz describes as “just pure, unadulterated joy”, was a stabilizing and much-loved influence during these years.

Hirsch and Arnaz first met many years before their marriage, when she was a “cigarette girl” at a race track. By the time they became re-acquainted, she was married to Clement Hirsch, the owner of Kal Kan Dog Food. Together, they had a son named Gregory.

Lucie Arnaz explains, “Greg, Edie and Clement lived next door to us in Del Mar, California, and shared a house with Jimmy Durante and his wife, Marge. And that’s how we got to know each other. We all grew up together. After my parents got divorced, my father dated some [women] and they were just exactly what you would expect. It was straight out of The Parent Trap. It was like, ‘Really, dad? No way. Over my dead body!’ Then, all of a sudden, he got that out of his system and started seeing Edie and we all just went, ‘Don’t you dare see anybody else! She’s it! She’s the best person for you!’”

She recalls that Hirsch, “couldn’t cook when she married him, but she learned how to become this outrageous cook and we kind of learned together. She played tennis, she liked to bowl, she loved the horses, she was a great fisherman, she loved to swim. Any place we wanted to go, she jumped in the car and would take us there. I adored her.”

“So I didn’t feel like I was sort of cheating by loving Edie. I didn’t love her more than my mother. I loved her differently.”

“Gary never said anything nasty; he was always tooting my dad’s horn — Desi did this, Desi did that, Desi knew how to do this. But my father,” she pauses slightly, “was not as kind to Gary. Not in a terrible way, but he had a kind of jealousy like, ‘I know I couldn’t have her but nobody else should, either.’

“He kind of needled Gary by calling him ‘Barry Norton,’” she chuckles, trying her father’s accent on for size, “asking, ‘Is your mother still married to that Barry Norton guy?’”

Ball and Morton’s marriage endured for 27 years until her death in 1989. Arnaz lost Hirsch to cancer a year before his own cancer-related death in 1986.

“I learned so much from Edie and I was devastated when she left,” says Lucie. “It was just so unfair … You are so lucky to have someone like that in your life. I was so, so lucky.”

‘Lucy & Desi’ : Lucie Arnaz On the New Doc That Allows Her Parents to Tell Their Own Story

Will We Love Lucy? The First ‘Being the Ricardos’ Trailer Raises Questions About the Nicole Kidman-Led Lucille Ball, Desi Arnaz Biopic