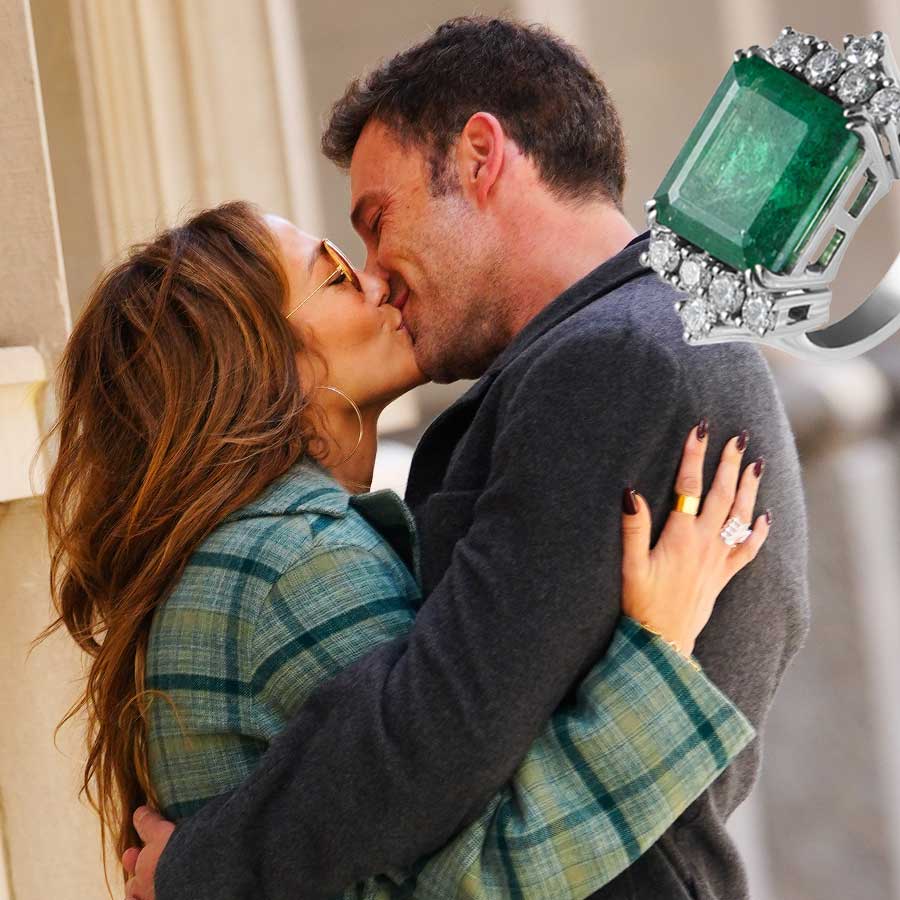 Jennifer Lopez and Ben Affleck spotted in a tender moment last September in New York City. Affleck bought Lopez a gorgeous jade-coloured diamond engagement ring — though you'll have to subscribe to JLo's e-newsletter to get a peek at the real ring. Photo of Lopez and Affleck via Gotham/GC Images; Inset: Ring image courtesy ARTKucherenko/Getty Images

Jennifer Lopez, 52, and Ben Affleck, 49, make it official (again!) with a unique 10-million-dollar jade-coloured diamond engagement ring that would have us GREEN with envy — if we weren’t so happy for them.

Second time’s the charm? Lopez and Affleck met in 2001 on the set of their movie Gigli, which hit big screens (and bombed) the following year. At the time, Lopez was married to her second husband Cris Judd, whom she promptly divorced, noting the marriage “didn’t really count.” It was, after all, a relationship with an innocuous back up dancer that some suspected she got into to clean up her image after the fiasco that ended her romance with rapper Sean Combs, then known as Puff Daddy.

Going public with Affleck the following year, the duo celebrated their romance in her “Jenny from the Block” video — “Don’t be fooled by the rocks that I got / I’m still, I’m still Jenny from the block” — made Jersey Girl together (another flop) and were engaged by November 2002. The 2.5 million, 6.10 carat pink diamond ring from Harry Winston that Affleck gifted Lopez kicked off a trend for coloured diamonds while the duo also launched the celebrity couple portmanteau. Their hybrid moniker, Bennifer, led to TomKat, Brangelina, Kimye, et all.

Within two much publicized years though, the “most famous couple in the world” cancelled their September 2003 wedding — a day before the ceremony — before officially calling it quits in January 2004. Rumours abounded: Affleck’s “team” didn’t think the glitzy Lopez was good for his image as a “serious” actor/director; he cheated on her and she told him to beat it; the intense publicity the duo attracted was just too much; it was his drinking and gambling. Where the exact truth lies, we may never know.

After 18 years, two kids, and a third husband (Marc Anthony; 2004 to 2011), Lopez was still mooning over Affleck, telling People magazine in 2016: “I really felt like when I met Ben, “Okay, this is it.” Five years after that, in a 2021 interview with the Hollywood Reporter, Affleck equally — eternally — smitten, ardently defended Lopez against the “rude” media coverage she’d endured when they were together.

“People were so f*cking mean about her …  vicious shit was written in ways that if you wrote it now, you’d literally be fired. Now, she’s lionized and respected for the work she did, where she came from, what she accomplished. As well she f*cking should be! You have a better shot, coming from the Bronx, of ending up as Sotomayor on the Supreme Court than you do of having Jennifer Lopez’s career and being who she is at 50 today.”

Well then, Ben. Tell us how you really feel.

That same year, Affleck began writing letters to Lopez while she was filming Shotgun Wedding in the Dominican Republic and was engaged to Alex Rodriguez — betrothal that tanked when the baseball legend was caught exchanging sexts with a reality star. Oops. Sorry A-Rod. Within months, Bennifer was back ON, no matter how many boo-hoo Instagram clips a maudlin Rodriguez posted. Ben and Jen are betrothed once again, and A-Rod is still getting trolled for that epic bungle.

On the other hand, Lopez is filling up her jewellery box, the recipient of six diamond rings from five husbands across four marriages. As Zsa Zsa Gabor, married nine times, once remarked “I never hated a man enough to give his diamonds back.”

The 8.5 carat natural green diamond Affleck proposed with this time around is exceedingly rare. Why green? “I always say the color green is my lucky color,” Lopez had recently written in a newsletter from her new site, onthejlo.com. “I’ve realized there are many moments in my life where amazing things happened when I was wearing green.” You may remember THAT Versace dress, the one a 30-year-old Lopez wore to the 2000 Grammys with Puffy, her beau at the time. The barely-there gown pushed her into the stratosphere and became an iconic look. In fact, the image caused such a boom in online searches that it literally helped prompt the creation of Google Images. And in 2020, the dress proved eternal when Lopez went viral again after donning it on the Versace runway in 2020.

Now gifted with the mammoth green sparkler, this week she added: “Green is my favorite color; it’s also my lucky color. Obviously, it’ll be my lucky color forever now. It means so much when somebody thinks about you and loves you and sees you. And it was just the most perfect moment.”

Some fans gave the side-eye to Lopez teasing fans with an Instagram clip about “exciting news” she could only share with her “inner circle”—AKA: those who signed up for “insider” emails from onthejlo.com. Then again, any possible wedding tastelessness paled in comparison to the spectacle that was last weekend’s US$3.5 million wedding, set against the backdrop of Russian war crimes, for the unemployed 23-year-old offspring of Posh and Becks. At least Bennifer have earned their love — and their money.

“My mother says I didn’t open my eyes for eight days after I was born, but when I did, the first thing I saw was an engagement ring. I was hooked.” —Elizabeth Taylor, married eight times.