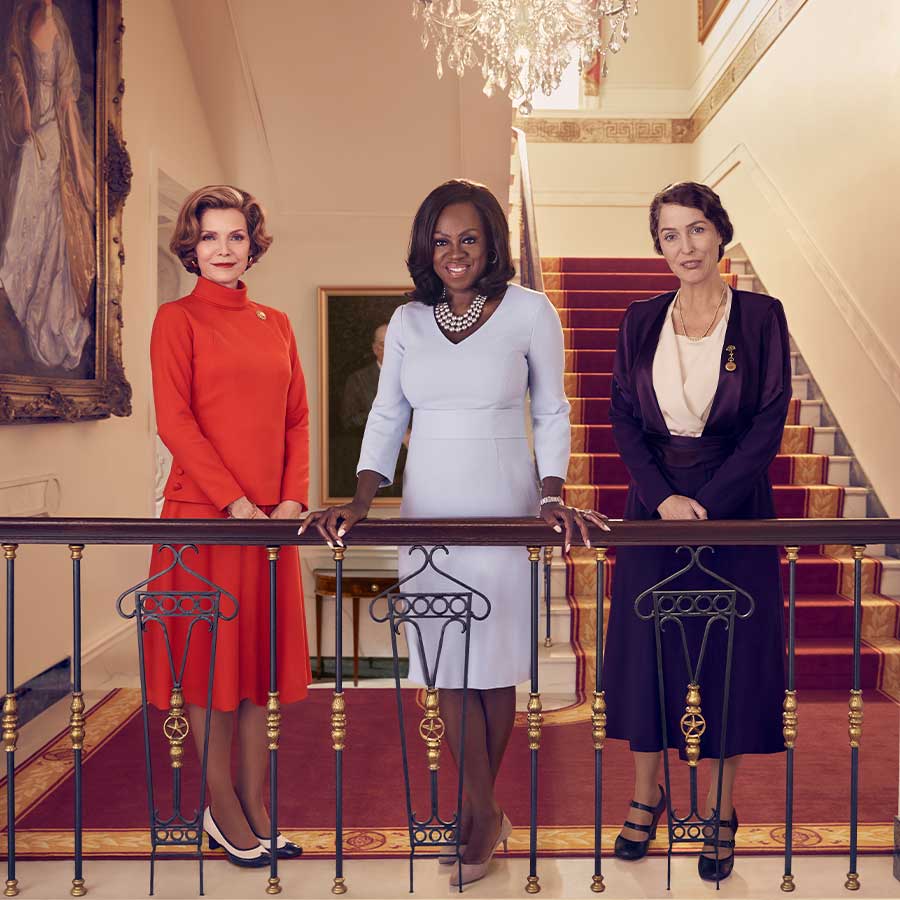 Michelle Pfeiffer as Betty Ford, Viola Davis as Michelle Obama and Gillian Anderson as Eleanor Roosevelt anchor 'The First Lady,' an anthology series that demonstrates the immeasurable impact these three women had over the course of 20th and 21st century American history. Photo: Ramona Rosales/SHOWTIME

The very first scene of the new Showtime series The First Lady tells us what we are going to get: a picture of a picture, perhaps.

Those first few seconds has Michelle Obama (played by Viola Davis, 56) sitting for an artist as she poses in a way familiar enough because it is the image of her immortalized in the National Portrait Gallery. Jarring, at first, because Davis looks so much like Obama in that moment. But it is clearly not Obama — one of the most famous women in the world — and the show almost seems to be daring the viewer with the question, right off the bat: can we ever know a First Lady beyond what we see through the prism of history?

Ms. Obama, alas, is just one part of this intriguing triptych created by Aaron Cooley and directed by Susanne Bier. Both Betty Ford and Eleanor Roosevelt round out this vehicle which will, no doubt, be compared to The Crown (in the way that series recreates the lives of the Royal Family), but actually struck me — as I previewed it all — as more like The Crown meets The Hours. It moves like the latter film — at least structurally — in the way each episode is operating in three different timelines at ones, the stories looping forwards, then backwards, sometimes forward again, as world events echo each other, moments bump into each other ironically and we delve into the emotional climate of three distinct women.

Soaring mainly through the performances at play — Davis is joined by Gillian Anderson, 53, in the role of Roosevelt, and an absolutely incandescent Michelle Pfeiffer, 63, in particular, as Betty — the series arguably does occasionally bite off more than it can chew. That’s almost bound to happen given the sheer breadth of events the 10 hours of story it attempts to cram in (using both dramatization and real-life news footage sprinkled throughout). The Second World War. The Great Depression. Watergate. The rise of second-wave feminism. The fight for same-sex marriage. Sandy Hook. Etc, etc.

Plus, the marriage that defined each era of life at 1600 Pennsylvania Avenue (and the courtships that brought them there).

Plus, plus, the trajectories of each woman in the limelight: Roosevelt’s trailblazing and utter expansion of what a First Lady could be, as well as her blurry sexuality; the addiction and health scares that made Ford an absolute household name; the racial dynamics that inevitably buttress the story of Obama, the first black First Lady (who met her husband-to-be, as we are reminded, when she was his boss).

While their husbands have power — in the most precise sense of the word — the women beside them, with their ill-defined and ever-mutating roles, have influence. The difference between power and influence? That is the theme that motors this series, even if it sometimes sinks under the sheer Wikipedia-ness of this project. (I mean, Betty Ford alone could, and should, have her own series!) Still, for history buffs, and for fans of this particular trio of actresses, this is can’t-miss-TV.

Three scenes. Three First Ladies. In a series spanning decades, these are the moments to look for, in my opinion. All, in their respective ways, give us a taste of the women at the heart of their stories.

For all the ways Eleanor Roosevelt broke the mould for First Ladies, and is the blueprint for any woman using her voice — the way she used radio addresses to speak out on issues of social justice and racial prejudice; the way she helped promote women within her husband’s administration and tinkered with his speeches; the way a polio-infected Franklin Delano Roosevelt would never even have made it to the presidency without the wilful wife by his side — one moment in the series sums up all the many ways you can never really tweeze the personal from the political. It comes after the First Lady has discovered the love letters that confirm a relationship between her husband and her secretary, Lucy Mercer (a well-chronicled affair), and a tense confrontation that follows involving Eleanor, FDR (Kiefer Sutherland, 55), and FDR’s battle-axe mother, Sara (an ever-present presence in the Roosevelt marriage, played here by Ellen Burstyn, 89).

Resignedly — her face brimming with pain and her life-long insecurities laid bare — Eleanor here alludes to ending things with Franklin, to which Sara lays down the law.

“There has never been a divorce in the Roosevelt family, and that is not going to change now,” she tells the two. And, then with old-money panache, she tells Franklin that if he does otherwise, she will cut him off without a cent.

To sweeten the deal, the dowager tells Eleanor that she will actually pay her an additional allowance to redeem her for the “pain” she has endured. The power couple — knowing that the scandal would swallow them both — concede to the terms, with Eleanor later telling her husband, “I will require two things. You will never have contact with Lucy Mercer again, and we will never sleep in the same bed from this day forward.”

The scene is significant in the way it sets up one of the great what-ifs: if Sara had not threatened to cut off her son, if Franklin had divorced Eleanor, and if, indeed, his political career had collapsed, how differently might the history of the 20th century read? It is an incredible thing to consider given what the series shows as the years advance: how, after the Pearl Harbour disaster, Franklin actually asks Eleanor to console the country, on his behalf, on one of her radio addresses, knowing how trusted and beloved she is. During the 12 years she would occupy the role of First Lady — the longest term in history — she would effectively become mother to a nation.

One of the most moving moments in The First Lady comes at the very end of an episode where Betty Ford, wearing nothing but a robe, is looking at herself in a full-length mirror in the West Wing. Slowly, she lets the robe slide and looks at the spot where she has just had a mastectomy. Her face, a galaxy of emotions, keeps peering at herself, as her husband, Gerald (Aaron Eckhart, 54), embraces her — a wordless moment signifying more than just the love of years shared, but genuine tenderness.

Schematically, it is a scene that also says so much about the Mad Men-era spitfire that was Betty Ford: she is mourning the girl she once was (a promising dancer, who once trained with the great Martha Graham, in fact), but also letting us into a vulnerability that would shape her legacy. The way she dealt with her breast cancer, mere months into her husbands presidency, was a seismic moment because instead of keeping her health issues secret, as might be expected, she made them public and used her position to drive awareness of breast cancer and the importance of self-examination for women. She saved countless lives through her example and became a figure of radical transparency years before the Age of Oprah.

If that was not enough to make her one of the most significant First Ladies of all time, she did it all over again when her drinking, and reliance on pain killers, caught up with her after the Fords lost the election in 1976. After a downward spiral (there is one wild scene in which Michelle, as Betty, is dancing to Last Dance by Donna Summer, at a party in Palm Springs!) followed by an intervention by her family (led by her daughter played by an excellent Dakota Fanning) and some denial along the way, not only does Ford confront her demons, but she’s inspired to speak out more broadly about addiction issues (one of the first high-profile alcoholics, especially for a woman of her social class).

Ultimately, she even founded the institution that bears her name: the Betty Ford Centre. Because of that — and her whole personal arc — she is arguably more famous, with hindsight, than even her presidential husband!

What seems, at first, like a throwaway moment, in the latter part of the series, is actually laden with meaning: a scene between Michelle Obama and her hairdresser. When he compliments her on her natural hair, and seems to suggest she embrace it, this First Lady laughs it off. “You want me to wear this to a DNC fundraiser? You want me to stroll in there in my Reem Acra and Jimmy Choos, and rocking this?” To which, he quips, “You would break Twitter.”

As it is so often with hair and, in particular, Black women’s hair, the whole exchange is about so much more. It drives home a recurring theme in the more modern-day segment of the series: the too Black/just Black enough calibration that Michelle Obama has to continuously make from the moment her husband flies into the national spotlight, and how much push-pull there is in how she is allowed to redefine the role of First Lady (it ranges from media coverage to pockets of tension itself between the West Wing and East Wing).

It also underpins the tremendous trajectory of this First Lady: from the woman who openly hated politics (“Remember Jackie Kennedy? Her blood splattered pink Chanel suit?” she asks her husband, early on, when he is running in the Democratic primary, and their house is suddenly run amok with Secret Service agents) to the Ivy League go-getter who becomes a powerful force both inside, and out of, her party (by the end, we get to the “When they go low, we go high” moment, as she steps in to try to save the Hillary Clinton campaign in 2016 against the Darth Vader running on the Republican ticket). Obama, like the other two women depicted in this series, becomes a transformational First Lady just by being herself.

The First Lady premieres on April 17 on Showtime, and is also available for streaming via Crave in Canada.