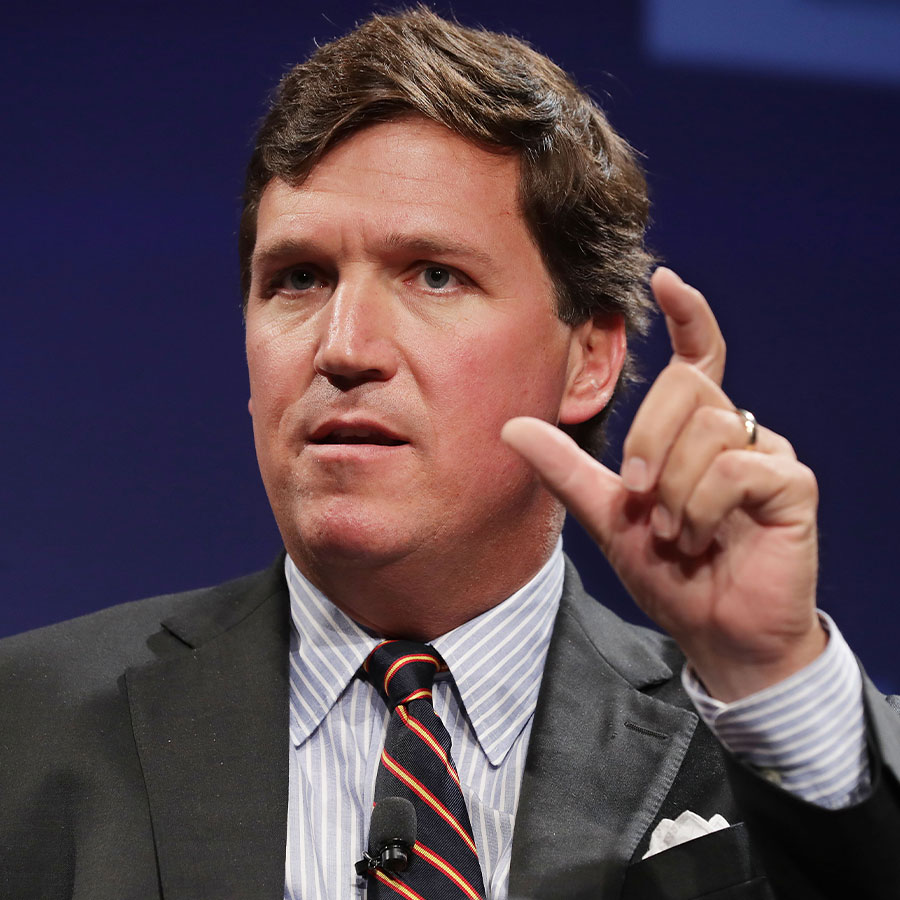 Fox host and Putin fanboy Tucker Carlson laments the death of machismo while advocating for testosterone-boosting testicle tanning in his new documentary special, which calls for the bringing back of “manly men.”

Probing the demise of manliness in Western society, the ultra-conservative pundit heralds his investigative report with a trailer for his documentary special The End of Men, notable mostly for its brawny, half-nude (white) men wrestling, shooting firearms, and chopping wood. Instantly lampooned for its wildly homoerotic overtones, one Daily Beast scribe quips that it would get Carlson “arrested” if he screened it in a Florida classroom — where conservative legislation has recently made addressing sexual orientation illegal.

Interviewing Andrew McGovern, an unknown Ohio personal trainer who counsels men to “take their testosterone to another level” by subjecting their balls to infrared light, Carlson introduces “testicle tanning” and “bromeopathic” to the lexicon. Promoting the “therapy” to an incredulous Kid Rock (“Dude, stop!”) in an subsequent interview, Carlson further underscores the treatment’s benefits with an eye-catching scene in the doc’s trailer that features a naked man, arms outstretched in euphoria and his genitals brightly illuminated by what social media wags deem a “Tesla recharging station.”

But not to worry, order will soon be restored. After all, the silver lining of the culture’s ongoing breakdown is that it can only produce a much-needed phalanx of alpha men, ready to reclaim their rightful position — in charge and on top!

“Once a society collapses, then you’re in hard times,” the film’s narrator intones. “Those hard times inevitably produce men who are tough, men who are resourceful, men who are strong enough to survive. They go on to re-establish order.”

Carlson was born in San Francisco’s groovy Chicano Mission District in 1969. Seven years later, his parents split because his mother, an artist, wanted to pursue a “bohemian lifestyle.” Daddy didn’t. A journalist turned banker cum Reagan Administration appointee, Dick Carlson went on to wed an heiress to the Swanson frozen food empire when Tucker was 10. His mother, Lisa Lombardi, gave up custody and married artist Michael Vaughn, with whom she collaborated. She never saw Tucker or his brother again. Perhaps mommy issues explain why Carlson grew up to abhor liberals and adore bowties? “The majority of successful people I know had childhood trauma,” he told GQ in 2017.

Archly conservative by his 20s, Carlson would proudly describe himself in his 1991 college yearbook entry as a member of the “Dan White Society” — an homage to the man who, in 1978, assassinated Harvey Milk, California’s first openly gay elected official. The entry also declared his support for Jesse Helms, the notoriously bigoted North Carolina senator who virulently opposed, among other things, the Civil Rights movement and led a 16-day filibuster against instating Martin Luther King Jr. Day as a national holiday in 1983. Carlson’s brother, Buckley, would go on to become a communications director for the Republican Party best known for calling a spokeswoman for the New York mayor’s office “a whiny little self-righteous bitch” and “labia face” — terms that Tucker assured the media his brother had meant in the “nicest way.”

Three decades on and by now America’s most popular cable news host, as well as the second-worst dancer in the history of Dancing with the Stars, Tucker uses his massive Fox platform to rail against diversity, trans women, and climate change efforts, make outrageously racist comments, and praise dictators — including touting far-right Hungarian Prime Minister Viktor Orbán’s brand of authoritarianism as a model for American governance — while venting his contempt for democracy.

“Why do I care what’s going on in the conflict between Ukraine and Russia?” he demanded rhetorically on his show in 2019. “Why shouldn’t I root for Russia? Which I am.” Still genuflecting ​at the world’s most grotesque “Alpha Man” on the eve of his Ukraine invasion, Carlson urged his viewers to ask of themselves: “Why do I hate Putin so much? Has Putin ever called me a racist? Has he threatened to get me fired for disagreeing with him? Has he shipped every middle-class job in my town to Russia? Did he manufacture a worldwide pandemic that wrecked my business and kept me indoors for two years? Is he teaching my children to embrace racial discrimination? Is he making fentanyl? Is he trying to snuff out Christianity?”

The pro-Putin commentary was so consistent and effusive that leaked Kremlin memos revealed Russian intelligence had advised the country’s state media that it was “essential” to broadcast clips of his show. Meanwhile, Carlson continued to shill for the Russian despot even as his own colleagues were killed in Ukraine.

Perhaps that’s no surprise given his accolades for North Korean tyrant Kim Jong Un: “You’ve got to be honest about what it means to lead a country. It means killing people,” Carlson opined in a 2019 interview on his network, underscoring once again his admiration for genocidal toxic masculinity. “It takes a pretty hard man to keep a hold on power in a place like North Korea.”

“I leave my sons Tucker Swanson McNear Carlson and Buckley Swanson Peck Carlson one dollar each; $1.00 each,” said their mother, Lisa, who died in 2011, in her will.