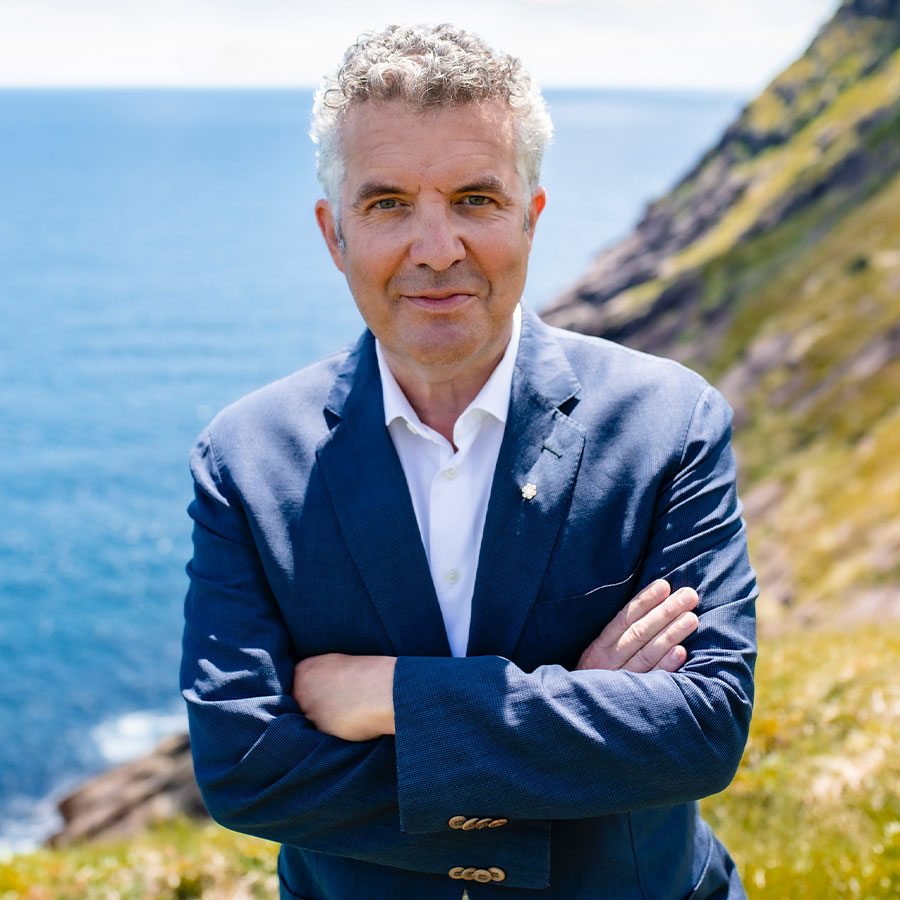 Rick Mercer, who's currently on the road with the Just For Laughs Comedy Night in Canada tour, says there was "no shortage of things to rant about" during the pandemic. Photo: Courtesy of Newfoundland and Labrador Tourism/Kara O’Keefe

Rick Mercer has logged an incredible amount of travel miles across Canada throughout his 30-plus year comedy career, so it’s no surprise that, when it comes to his first post-pandemic adventure — hosting a cross-country Just For Laughs comedy tour — he felt more than excited to hit the road.

“It just feels right,” the Canadian comedy legend, 52, says during a phone call from Moncton, N.B. — the first stop on the Just For Laughs Comedy Night in Canada tour — last week. “I can’t tell you how right it feels to be on the road because it may not make a lot of sense, but being on the road very much is like going home.”

He adds that, “I always looked at the entire country like my hometown,” reminiscing about his coast-to-coast exploration of Canada during the 15-season run of the Rick Mercer Report, which aired its final episode in 2018.

Joining the Newfoundland and Labrador native on the tour, which hits 18 cities across the country, is an all-Canuck roster consisting of Just For Laughs favourite Eman El-Husseini and Juno-winning comedians Dave Merheje and Ivan Decker — a lineup that Mercer says keeps the laughs rolling from start to finish.

“I can’t think of anything that people need more than that right now,” he says.

Of course the This Hour Has 22 Minutes star is used to keeping busy, and didn’t sit on his hands during pandemic lockdown. During the first COVID summer he wrote his memoir, Talking to Canadians — his fifth book, which hit shelves last November — from a cabin he built about 40 minutes outside his hometown of St. John’s.

And now, back on the road, the comedy tour represents a full-circle moment — it was 19 years ago, during his first Canadian Just For Laughs tour in 2003, that Mercer performed a stage version of what would become the Rick Mercer Report.

On Monday and Tuesday, the tour hit St. John’s for a pair of shows at the Arts and Culture Centre — a venue that often leaves the comedian reflecting on where the seeds of his performance aspirations were planted.

“Every now and then you’d be trotted from the school and you’d be brought to the Arts and Culture Centre for some sort of show,” he recalls of his childhood.

“And they would always announce off the top not to look up at the lights and shake your head. And of course every child would look up and shake their head viciously.

“They would say ‘Stop that, don’t do that, you’ll make yourself sick, you’ll go blind,'” he adds with a laugh. “I have fond memories of that. And, of course, then watching the show and going ‘Ahah, that should be me up there.’

“That’s a real thrill for me. There’s no doubt about it. That’s my Massey Hall.”

During our conversation, Mercer reflected further on his lockdown experience, politics in pandemic times and the importance of embracing optimism (and comedy) today.

ANDREW WRIGHT: I understand you got to know your neighbours quite well during the pandemic?

RICK MERCER: A lot of different things happened. I moved, I built a cabin in Newfoundland on the ocean and I wasn’t really sure why I was doing it when I did it. But as soon as it was finished, the pandemic happened. Then I ended up setting up an office in my shed and I wrote an entire book in my shed. So I started spending an awful lot of time around the bay, in my shed. That wasn’t something that I saw coming.

And I think it’s changed everyone’s perspective. I think everyone has a new relationship with their neighbours or the people that they live close to because travel went out the window, obviously. And you just saw people more. People’s busy lives suddenly came to a halt.

AW: You’ve mentioned previously that you learned a lot from fellow comics while touring with Just For Laughs as a young comedian. What sort of mentorship role do you take with young comedians on tours like this?

RM: You know, I don’t think there’s anything I can teach these comedians. The first time I toured with Just For Laughs, it was an incredible show and there were comedians from all over the U.K., from the United States from all over. And I loved it. They were incredible.

But when the time came for them to ask me to go out on the road to lead a show across the country, at this point in my life, I said ‘I’m not going out with a show called Comedy Night in Canada unless it has an all-Canadian cast.’ And they had never done that before. They did it and we sold every single seat. It was one of their biggest tours ever. And this time around, it wasn’t even brought up. It was just that fait accompli. And it’s not like we have a shortage of comedians to pick from. This lineup is a testament to that.

AW: Is there a comedian you’re particularly excited to hit the road with on this tour?

RM: Well, all of them, for sure. Some of them I know better than others. Last time I was on tour with Ivan Decker I was truly in awe of him. I stood up in the wings and watched every single night as we went across the country because I learned something every single time. He’s just a powerhouse.

AW: Your comedy is never short on passion, including your trademark rants. What stirred the comedic passion in you for this upcoming tour?

RM: Well, I think we’ve all learned a lot about ourselves in the last couple of years, and we’ve learned a lot about the country. And so I talk a lot about those things. I talk about the fact that we’re in a Conservative leadership race. We’re in one of those situations where we don’t know whether the prime minister’s gonna be around five minutes from now, probably not around for the next election. There’s a lot to mine there.

And then there’s your everyday observations that you make as you go through life. But there’s a lot of absurdities happening out there right now. And there was no shortage of things to rant about and talk about and have fun with and no shortage of things to celebrate either, which is good. I think that it’s always been part of my brand, celebrating. I think, again, we could use a bit of that right now.

AW: Political tensions, of course, rose greatly during the pandemic. How much more difficult, then, is it to make political jokes now than in the past — when perhaps people didn’t take it so personally?

RM: I think I’ve always been aware — and I think this comes from having a TV show that was fortunate enough to get the numbers that we would get week in, week out — that I would realize that I have an audience that stretches right across the country, across different regions, quite often across regions that are often at conflict with one another. I realize that my audience varies greatly in age. And I realize that the audience varies in ideological perspective as well. And I don’t beat anyone over the head. I’m very good, I think, at finding the common ground. I think that that’s important in comedy, certainly in my kind of comedy. I want people to walk out of there with a spring in their step — not feeling like they’ve gotten a lecture.

AW: Canadians have gotten to know their premiers and prime minister quite well throughout the pandemic. Has that increased exposure given you a bit more material to work with?

RM: You know, I have a giant whiteboard in my office and there’s no shortage of ideas that went on that board. There’s plenty to work with, there’s no doubt about that.

AW: Of course, comedy can also be a great way to ease anxiety. What role do you think it can play in helping us come out on the other side of the pandemic?

RM: I’ll answer that in general terms more than specific to the pandemic. I think if someone truly didn’t have a sense of humour, that would be a miserable way to lead one’s life. And I think comedy is imperative. And you don’t like to focus on this too much, but it’s a coping measure. [It’s] so important to have the sense of humour and the ability to laugh in the most difficult times in the world.

That’s why there was a lot — they report — of laughs in the [war] trenches and that was the most horrible place that had ever existed on Earth. And yet, there were laughs there. And it was because if there weren’t laughs it truly would be unbearable. And I think that that’s true now. It’s always true.

AW: How would you describe your comedic voice at this point in your career?

The Just For Laughs Comedy Night in Canada tour runs through May 22. Click here for ticket information.

Podcast: Rick Mercer On Rants, Non-Retirement and His Final Report