As the Series Comes to an End, How ‘Grace and Frankie’ Exemplified Empowered Aging on the Small Screen 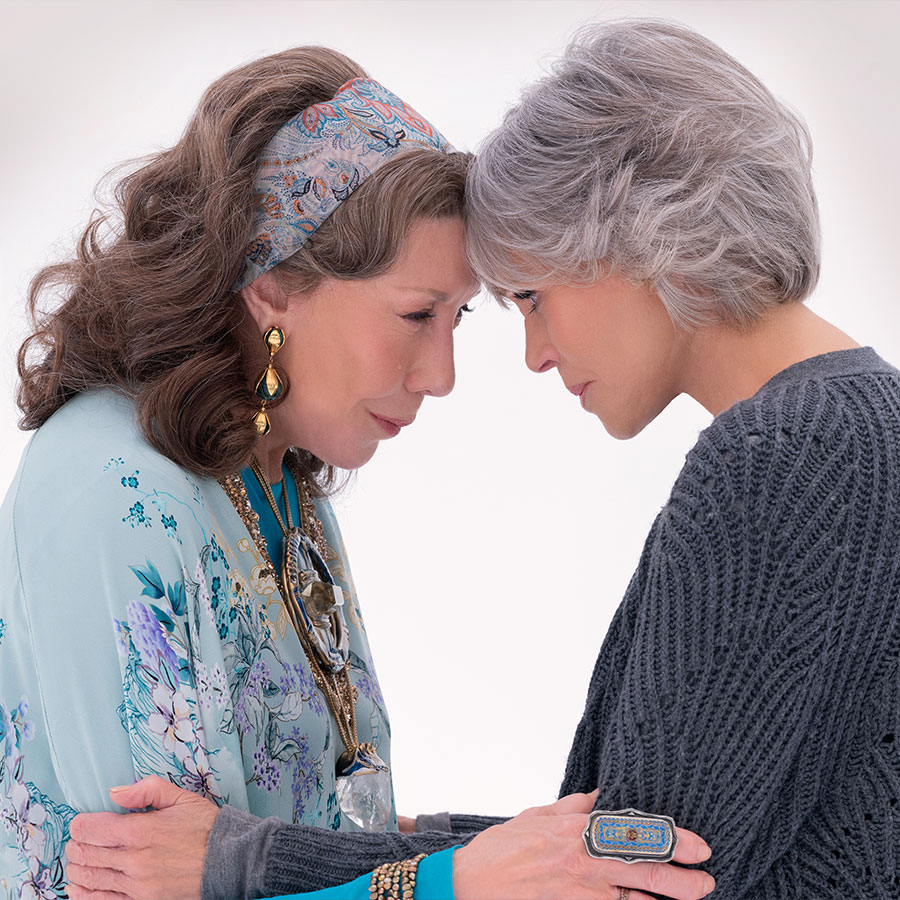 Lily Tomlin as Frankie and Jane Fonda as Grace in a scene from 'Grace and Frankie,' which ends its seven season run when the final episodes drop on Netflix this week. The show tackled numerous issues related to aging, from sex and relationships to assisted suicide. Photo: Suzanne Tenner/Netflix

When The Golden Girls debuted in 1985, it was a TV revelation. Never before had a quartet of women over 60 been the focus of a prime time television series, let alone one that depicted them as single, dating, falling in love and, yes, having sex. Gasp!

And after the TV classic signed off in 1992, precious few prime time shows put older characters — especially women — at the fore.

You might, then, call the period between 2010 and present day the Golden Age of “Golden” television — a time when series revolving around older characters contending with the realities of life’s second (or even third) act abound. Hot in Cleveland, which premiered in 2010 and ran for six seasons, is the obvious heir to The Golden Girls — it even starred a Golden Girl in Betty White. And since then shows ranging from Betty White’s Off Their Rockers to The Kominsky Method, Hacks and the recent Sex and the City revival, And Just Like That…, have picked up that mantle, putting older characters and their lives, loves and struggles front and centre.

It’s no fluke, really, that the last decade or so has seen this shift (which extends to the big screen as well). As our society ages, the biggest generational cohort, the baby boomers — ranging from their late 50s to their mid-70s — want to see themselves and their experiences reflected in popular culture. At the same time, attitudes around empowered aging are celebrated now more than ever, as are those people, both real and fictional, who represent it (see, for example, the first-ever Golden Girls fan convention, which kicked off last weekend — 30 years after the show’s final episode aired).

Perhaps, however, no show in the last decade has encapsulated the shifting societal attitudes around aging more than Grace and Frankie. The Netflix series, about two women — Fonda as Grace and Tomlin as Frankie — in their 70s (and now 80s) who become roommates after their husbands come out as gay lovers, premiered in 2015 and, on April 29, will drop its final set of episodes on the streaming service, ending a celebrated seven-season run.

The show, of course, stars two Hollywood legends in Jane Fonda, 84, and Lily Tomlin, 82 — neither of whom had ever anchored a television series in their decades-long careers.

“I want to do something that a lot of people see and has a cultural impact. It’s about audience and a steady job,” Fonda told Zoomer in 2015, when Grace and Frankie premiered. “I love having a steady job. I’ve never worked for four months in my life. I came up in an era when, if you were a movie star, you would never do television.”

The success of Grace and Frankie is, of course, built on the foundation of the decades-long friendship — and resulting chemistry — of the two leads, who co-starred alongside Dolly Parton in the 1980 film 9 to 5. Tomlin said their pairing on the show “seemed so natural” in an interview with People, following a ceremony last weekend where her hand and foot prints were enshrined in the pavement in front of Hollywood’s TCL Chinese Theatre.

She added that she knew her and Fonda would do Grace and Frankie, “because it was about something that was important to us, aging women, and them not being marginalized and being treated like human beings and how they would want to be treated and thought of. And so it just felt so natural … We didn’t expect to be on a hit series at this point in our lives.”

The show itself proved a perennial favourite with audiences because it didn’t shy away from subjects that some might consider taboo.

“The direction prints are large so we can see them, the on and off buttons glow in the dark, the tip of them moves easy so you don’t have to wreck your wrist,” Fonda told interviewer Savannah Guthrie on Today ahead of the season’s premiere.

But even that interview had host Guthrie acting a bit prudish, noting she “can’t think of a PG way to describe what you’re selling” on the show — leading to Fonda characteristically blowing through the awkwardness to simply come out and say it.

And that interchange alone illustrated why Grace and Frankie was so important to the cultural conversation.

Grace and Frankie also tackled tough subjects, like assisted suicide. A story by writer Mallory Carra for Bustle said the show’s treatment of the subject, “truly sets this series apart from anything else on the air right now,” calling it “a beautiful tribute to friendship in the golden years and a life well-lived.”

And in an overall look at the series, Observer journalist Vicky Kalpaxis noted that, “True to the two actresses’ activist values, Grace and Frankie makes powerful feminist arguments against ageism and towards sex-positivity in women, both young and old … But its deft take on topics like feminism, ageism, sexism, homosexuality and sex-positivity makes this show far from irrelevant — and all of those topics are informed by Fonda and Tomlin’s mutually supportive sisterhood.”

Building on that idea of sisterhood, the final episode of Grace and Frankie features a reunion of Fonda and Tomlin with their 9 to 5 co-star Dolly Parton.

“She’s on the last episode. And that was one of our favorite episodes. We really loved doing that and having Dolly there,” Tomlin said of the 76-year-old country music legend during her People interview. “It was almost too late!”

The last time the three performed together in public was the 2017 Emmy Awards, where the trio appeared as presenters and riffed on sexism and the importance of supportive friends before announcing the nominees.

The trio made headlines for their appearance, with Parton even giving a nod to Grace and Frankie with one of the lines of the night.

“I’m just hoping that I’m going to get one of those Grace and Frankie vibrators in my swag bag tonight,” she said, to raucous laughter. “Do you think that’s possible?”