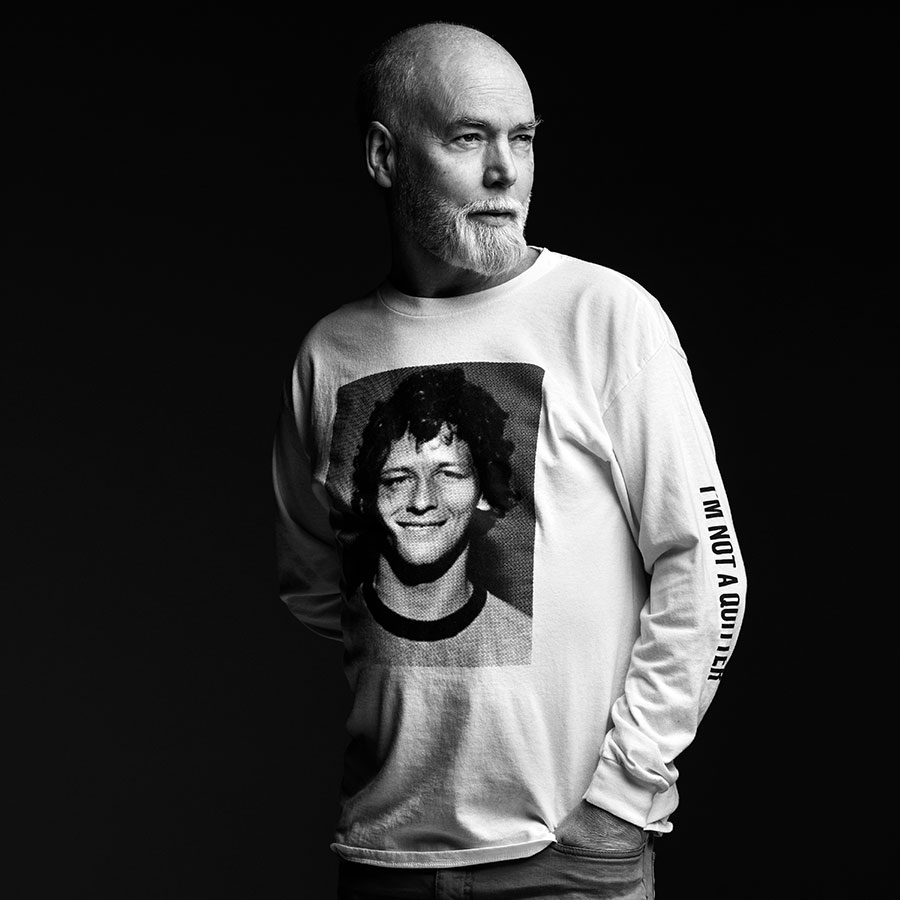 Artist Douglas Coupland created the new Terry Fox shirts using a never-before-seen photo of Fox, believed to be from a student ID card. As he told Zoomer, “It’s hard to find a fresh pic of Terry.” Photo: Courtesy of the Terry Fox Foundation

The shirts for the annual Terry Fox Run this September, however, are collector’s pieces featuring a blow-up black-and-white photograph of the race’s inspirational force, Terry Fox, across the chest. The only type on the shirt reads: “I’m not a quitter,” an abbreviation of Fox’s own words from his 1980 solo fundraising run: “Nobody is ever going to call me a quitter.”

Designed by renowned Canadian artist Douglas Coupland, 60, the shirts feature a dot-printed image of the forever-young Fox, seen in a blow-up of his Simon Fraser University ID card.

“It’s a very, very simple design,” says Coupland, reached by phone at his west Vancouver home. “I’ve always liked marathon bibs, so that was the inspiration. “Bibs are treasured, you earned that sucker, people frame them.”

The shirts were launched by the Terry Fox Foundation this past April 12 — the 42nd anniversary of the day Terry dipped his prosthetic foot into the chilly waters off St. John’s to begin his legendary solo run to fundraise for cancer research.

The limited-edition shirts are available for purchase to support the run, or to wear on race day as a participant during the event on Sept. 18. Just imagine how moving it will be to see a sea of runners wearing Terry’s face.

The snap Coupland used for the shirt is believed to be from a student ID card.

“It’s hard to find a fresh pic of Terry,” the artist, who authored a pictorial biography of Fox called Terry in 2005, says of the photo.

Terry’s brother, Fred Fox, reached by phone from his home in Maple Ridge, B.C., concurs. “It was a photo of Terry none of us had seen before.”

Fred Fox, who works with the Terry Fox Foundation, expressed how moved he was by the lineup of Canadian celebrities who signed on to promote the shirt, the foundation and the run this year, as well as last fall’s fundraising broadcast on CBC, The Power of One. “They grew up with Terry. It is wonderful they are all so proudly Canadian.”

The foundation, which has raised more than $850 million for cancer research and been involved in some 10,000 fundraising events across the country, has worked tirelessly to keep Terry’s legacy alive.

To that end, Fred Fox is looking forward to getting back to visiting schools post-pandemic — outreach he has been doing for 30-plus years himself, and which his mother, Betty Fox, who died in 2011, was instrumental in promoting. What is wonderful, says Fox, “is that now the school kids, the teachers, the parents, most of them weren’t even born 42 years ago. To see Terry live on in this way is very powerful.”

Coupland, meanwhile, has been fascinated by Terry Fox since his youth. “I think Terry was a year or two older than me,” he says, and so he identified with him. “He came from a boring Vancouver suburb, like I did.”

Coupland watched Fox become “an athlete, then a celebrity, then something bigger than a celebrity. A myth. Myths only happen every 100 years, where there is traction and someone becomes eternal.”

After all these years, he says, Terry’s story “is still as emotional, every time. It is a very, very pure story, that just propels forward effortlessly.” Coupland began working with the Fox family through another brother, Darrell Fox.

“The family wanted something for the 25th anniversary, so we worked on the book [Terry], so they would have something to use in schools. It was filled with artifacts and the family archive, it was very emotional for them.”

Then came the 2010 Terry Fox Memorial at BC Place.

Coupland cast four statues of Terry in bronze, noting, “he gets bigger as he moves forward. One is life size and the final one is twice life size. It’s like a stop animation frame that shows the distinctive way he hop-skipped while he ran.”

Coupland says that Terry’s legacy in his mind is changing the conversation around cancer.

“The thing about Terry Fox is that, up until his run, cancer was something scary that people hid away from and didn’t talk about. If you saw a wheelchair you would look away. He kind of blew the door off that, making cancer explainable and discussable.”

Terry Fox fans and supporters can purchase a limited-edition shirt at terryfox.org and register to join the annual Terry Fox Run, which will take place on Sunday, Sept. 18, 2022. The shirts, produced by adidas, are available in a variety of sizes and styles. All proceeds support cancer research in Canada.

41 Years After Terry Fox Ended His Marathon of Hope, We Revisit Our Conversation With Terry’s Brother, Fred Fox

“His Legacy Is So Vibrant to Me”: Darrell Fox Remembers Brother Terry Fox on His Birthday