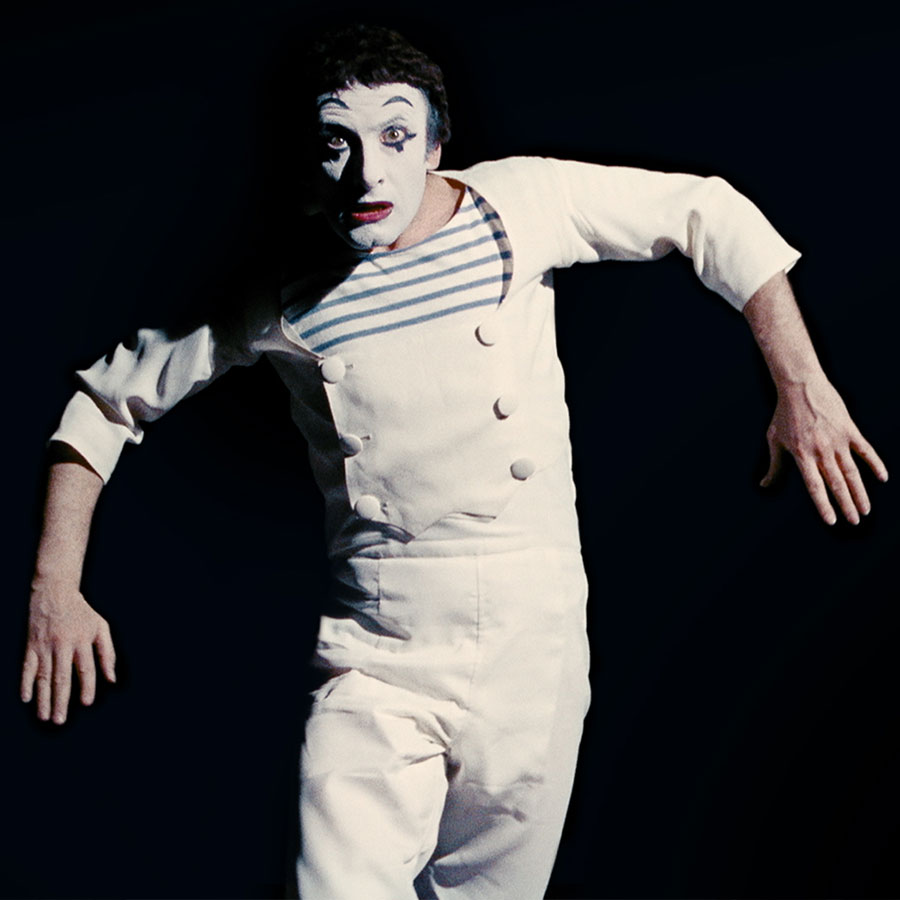 Marcel Marceau single-handedly defined pantomime in popular culture, while influencing stars like Michael Jackson. Yet his early life, in which he worked as part of the French Resistance, proved just as incredible. Photo: Les Films du Prieuré/Dominique Delouche

Generating buzz at the world’s biggest, most prestigious documentary film festival amid 226 non-fiction titles from 63 countries all battling for attention is a feat. Yet Swiss-based director Maurizius Staerkle Drux has done just that with The Art of Silence, the first-ever feature documentary about the life of legendary French mime Marcel Marceau, which receives its international premiere in Toronto at Hot Docs — in person and digitally — during the first week of May.

Perhaps the film’s resonance is not surprising given that Marceau — who died in 2007 at age 84 — led a remarkable life even before he electrified stages worldwide with silent but intensely expressive skits presented as his trademark persona, Bip the Clown.

So innovative was Marceau that he single-handedly defined a pop culture category, pantomime, influencing people like Michael Jackson, who based his famous “moonwalk” dance on Marceau’s moves — which were, in turn, greatly influenced by Charlie Chaplin, another performer of exceptional physicality.

Born in Strasbourg in 1923 to a Ukrainian mother and Polish father later killed in Auschwitz during the Holocaust, Marceau joined the French Resistance in his late teens, where he helped smuggle hundreds of Jewish children to Switzerland. He used his performance skills to entertain and distract them on wearying train rides when silence could mean the difference between life and death at the hands of Nazis.

As this richly detailed documentary shows, Marceau’s early compassion was later matched by his acting artistry. Both reached the stratosphere.

But the story of how The Art of Silence got made is (almost) as interesting as its subject. Director Maurizius Staerkle Drux’s father, Christoph Staerkle, is deaf; he viewed Marceau’s wordless acting as an exaltation of the visual and physical cues the deaf leverage to communicate with each other and with the world, later imparting that passion to his son. He is also a mime.

Christoph Staerkle’s story resonated with Marceau’s family when Staerkle Drux initially contacted them by letter about making his film. Wife Anne and daughters Camille and Aurélia gave Staerkle Drux extensive interviews, which he drapes over multiple narratives, including his own father’s and that of Marceau’s grandson, Louis Chevalier, in his beautifully nuanced film.

Staerkle Drux recently spoke with Zoomer about the film from his home in Zurich.

The Art of Silence has already screened in Europe. What’s been the reaction so far?

At one screening the entire Marceau family came; they were seeing the film for the first time as I insisted on no censorship or restrictions [while it was being made]. I feared they wouldn’t like the film, but it ended up being a nice evening. On a general level though, it’s impossible for me to judge the film or how people will react to it.

Given that the family had allowed you, specifically, to make this film, that must have added pressure on your end?

Yes, but the special thing was, they never actually agreed to me making the film (laughs). They didn’t deny me either. We tried to figure out if we liked each other, if we could exchange on an honest level, and if we could learn from each other as we went through the past. From that point we had a special friendship. Then, when I met Marceau’s grandson, Louis Chevalier, I was very attracted to the idea of him exploring his own personality and making that a part of the film as well. I spent a lot of time with the family before I started filming and then suddenly, it was done. Four years went by in a flash!

Did you always intend to include your father’s story as part of the film?

Not at all. I never wanted to focus on father-son stuff. I really wanted to focus on Marceau. But during editing of the first draft, the producer and the editor said, ‘Everything looks nice but the perspective of the story when you first explained it to us included your father. You should put him in the film.’ Then COVID struck and I suddenly had time with my father. I began filming him and then implementing him into the narration. To some degree, the children of deaf adults always give voice to their parents. I have since I was a boy. I think my father was very surprised when he saw the role he ended up having in the film.

What was the most surprising thing you learned about Marcel Marceau making this film?

His early life. Years before I made this film, I met a lady in New York who told me a mime had saved her life. She was talking about Marcel Marceau, who had saved her during Resistance time. I wondered how this could be possible. There’s lots of material about Marceau from the 1960s forward but not much about his younger life before that. There were many surprising encounters. I met Marceau’s cousin Georges Loinger, who helped him rescue the children (and who appeared in the film before his death in 2018 at age 108).

Unfortunately, I was never able to track down the woman from New York. But it planted the seed.

If you could ask Marceau a question, what would it be?

Oh! I would love to spend time with him, spend a day with him without talking. That would be really nice. I’m not sure I would ask him anything.

What do you think Marceau would have thought of your film?

I felt uncomfortable doing a film about someone who was already dead, talking about his life and his feelings without knowing him, so I really tried to involve the family. Also, this is my point of view on his life, which is part of why I put my father in the film. So I hope Marceau would see this and understand that I was interested in the connections between the people in the film even though they don’t all know each other. It would be lovely to see how he would react. He was always afraid the art of mime would die, which is why he started a pantomime school. I am also trying to keep it alive by showing people using mime to tell their own stories.

The Art of Silence screens May 2 at the Varsity theatre and May 8 at the TIFF Bell Lightbox in Toronto, and is also available to stream online across Canada for five days beginning May 3 at 9 am. Click here for more information.

As the Series Comes to an End, How “Grace and Frankie” Exemplified Empowered Aging on the Small Screen