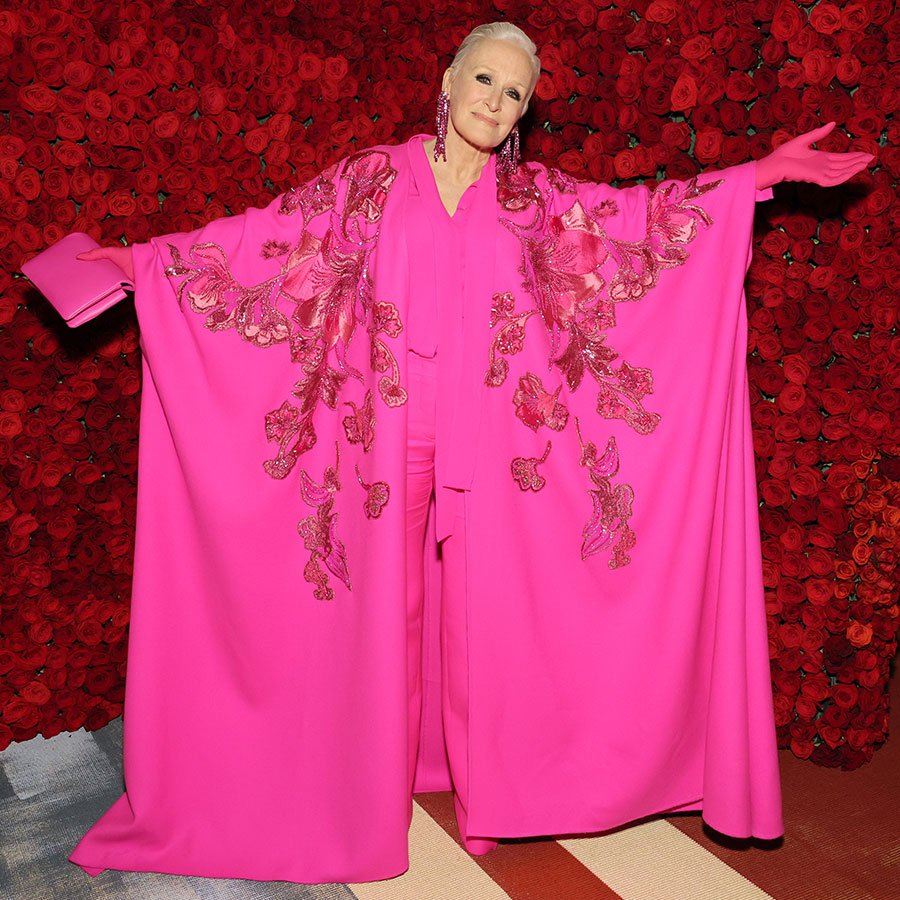 Glenn Close — looking radiant in a pink Valentino dress — was one of the many style highlights of the 2022 Met Gala, which embraced the notion of Gilded Glamour as its theme. Photo: Cindy Ord/MG22/Getty Images for The Met Museum/Vogue

Perhaps looking to shift away from the over-the-top camp that’s engulfed the Met Gala in the last few years — and which returning event co-chair Tom Ford derided as a “costume party” (we’re looking at you, Katy Perry, who has attended the ball dressed as a cheeseburger and a chandelier, but this year opted for a more sedate Oscar de la Renta dress) — Anna Wintour, 72 and wearing her customary Chanel couture accessorized with a hopefully ironic tiara,  alighted on Gilded Glamour as the 2022 theme.

Nonetheless, as Ford, 60, lamented, the ball “used to just be very chic people wearing very beautiful clothes going to an exhibition.” Now, as with everything, it’s metastasized into a publicity circus attended by influencers and also-rans who wouldn’t have made it into the after after party only a decade ago.

Here was uber-momager Kris Jenner, 66, in a pale yellow Oscar de la Renta kaftan with a new side swept flipped bob hairdo — both channeling a 1961 Jacqueline Kennedy look, which is interesting considering the dress one of her daughters chose to wear. But more on that later…

It’s the first time the entire Kardashian reality TV clan — which was once considered persona non grata — had been allowed through the hallowed gates of the Met Ball. This signals a true changing of the fashion guard.

Over there, the refined Vogue global editor at large Hamish Bowles, 58, understated in a vintage laurel crown and classic tux, sharing red-carpet hosting duties with a pair of incongruous B-listers: actress Vanessa Hudgens, looking festive in a puff sleeve, knickers out, sheer Moschino, and La La Anthony, a reality star and former MTV VJ who rocked up in a Laquan Smith mess capped with an Ascot-style chapeau that looked like what Kate Middleton would wear — if she were headed for the Star Wars bar.

As proof of Wintour’s unmatched convening power, political figures also graced the red carpet. Former Secretary of State and First Lady Hillary Clinton, 74, attended in a burgundy gown by Joseph Altuzarra embroidered with the names of 60 women who’d inspired her, from Rosa Parks and Lady Bird Johnson to Clinton’s own mother, Dorothy Rodham. The choice, unfortunately, proved a sad irony for the woman who might have been president, as only hours later, outside the gilded glow of the Met Gala, news leaked that the U.S. Supreme Court plans to overturn Roe v. Wade and a woman’s right to an abortion. That prompted an entirely different crowd to gather outside another institution — the Supreme Court building — to protest.

In addition, newly-minted New York City Mayor Eric Adams, 61, arrived in a tuxedo emblazoned with the phrase “End Gun Violence” designed by New York-based Nigerian artist Láolú Senbanjo. Though, with the Met Gala taking place following a spate of gun violence in the city, including mere weeks after a Brooklyn subway shooting in which 10 people were hit (but, thankfully, no one died), one has to hope that, as mayor, Adams has more than a custom tailcoat in his arsenal to help curb the growing problem.

And to cap off the evening, if the word “iconic” required further argument for retirement, tonight sealed it. One stopped counting at 100. Okay, onto the looks!

In a wow neon lime green gown adorned with massive flowers that she described as “happy”, the singer took its designer, Vera Wang, as her date.

The legendary supermodel wore a black Burberry dress embellished with the brand’s logo and accessorized with plenty of bling. But it was her yellow diamond Jacob & Co. necklace that nabbed headlines, as it reportedly came with a price tag of US$6.6 million and took two years to make.

Fab in the shocking pink hue that Valentino’s Pier Paolo Piccioli declared the look of the season, a smokey-eyed Close walked the red carpet with the designer, 54, who crafted her bold look embroidered with beaded flowers.

The multi-hyphenate — producer-musician-DJ-filmmaker — who recently added Oscar-winner to the list for his 2021 documentary, Summer of Soul, arrived in a voluminous coat in tribute to the legendary editor and fashion personality Andre Leon Talley — whose memorial in NYC this week offered an equal fashion parade.

The Canadian supermodel strutted the red carpet runway in a figure-hugging Ralph Lauren corset dress with a 12-foot double train by Ralph Lauren.

For her first Met Ball, which happened to fall on her 70th birthday — which red carpet cohost Hamish Bowles declared was “the new 45!” — Baranski wore a chicly sedate suit ensemble by Thom Browne.

The actresses’ Met Gala look paid homage to Elizabeth Hobbs Keckley, a former slave who made history as the first Black female fashion designer in the White House as the official dressmaker to First Lady Mary Todd Lincoln.

In a long sleeve liquid sequin gown, Sigourney Weaver arrived on the arm of her friend, and the frock’s designer, Michael Kors.

The Canadian-born model came adorned in a Dior gown and ropes of Chopard pearls, as well as her foremost accessory — her son and the world’s wealthiest man (and now Twitter nemesis turned owner), Elon.

Honorable mention to the Skims billionaire who lost 16 pounds in three weeks to fit into the — okay, we can use it here — iconic dress that Marilyn Monroe wore to sing Happy Birthday to JFK in 1962 during the time that they were rumoured to have had an affair.