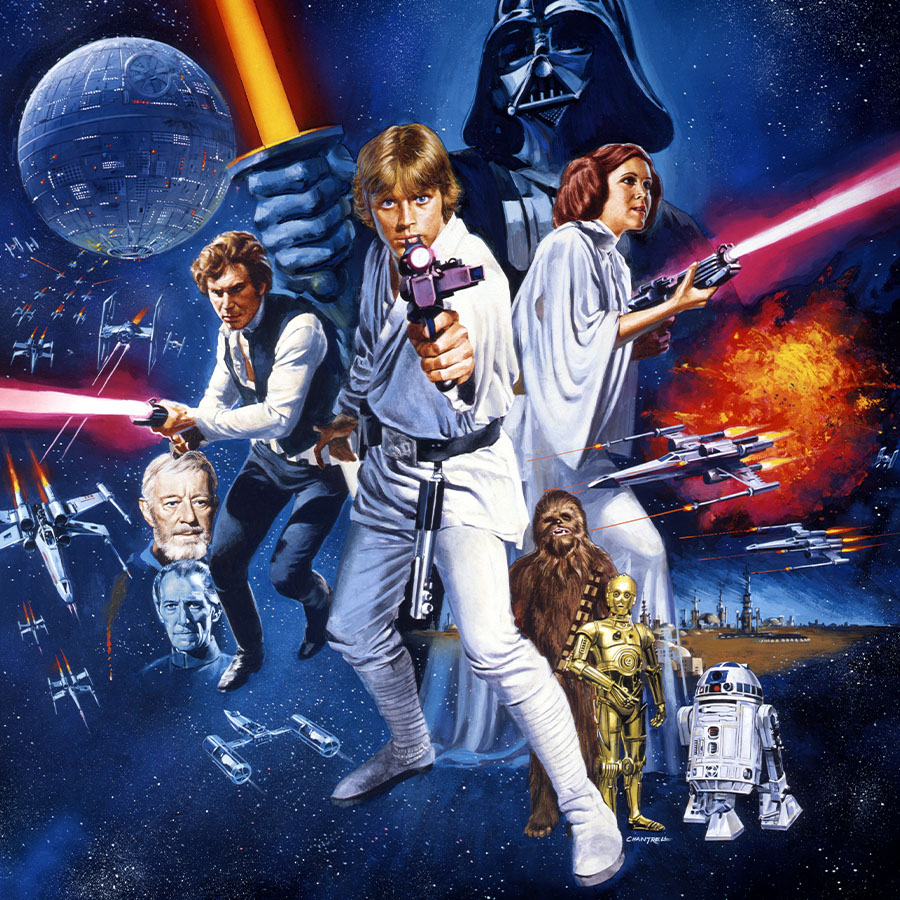 The movie poster for the original Star Wars film, which hit theatres on May 25, 1977, and subsequently launched a film and television franchise that continues expanding to this day. Photo: Twentieth Century Fox Pictures/Sunset Boulevard/Corbis via Getty Images

Tuesday, May 4th is Star Wars Day across North America. It’s not the anniversary of anything specific, like George Lucas’s birthday or that time in 2001 when 21,000 Canadians listed “Jedi” as their religion on the national census. It’s not even the anniversary of the release of the first film, Star Wars: Episode IV: A New Hope, which first hit theatres on May 25, 1977.

No, it’s a pun that went viral — “May the Fourth Be With You.” And upon this, an annual day of observation was born.

Star Wars Day follows, by a month, the 54th anniversary of the release of 2001: A Space Odyssey. That juxtaposition is perfect, since one was the sci-fi apex of ’60s boomer culture and one gave birth to Gen-X nerd culture.

Star Wars, meanwhile, was an action-packed half of a one-two punch by  Lucas and Steven Spielberg that paved the way for pop culture’s eventual which-superhero-movie-is-opening-this-week-again trend in recent years? Ships in space made sound-barrier-breaking sounds and weapons went, “Pew! Pew!”

The Birth of the Summer Blockbuster

Spielberg, of course, got that ball rolling in 1975 with Jaws — the movie that created the concept of the “summer blockbuster.” (Believe it or not, prior to Bruce the Shark chomping up the box office, summer was considered downtime at the movies, just as it was everywhere else).

The next year, Lucas released his game-changing space opera set “a long time ago in a galaxy far, far away” — inspired, ironically enough, by movie serials of the ’40s and ’50s. And the world, or at least the multiplex, would never be the same.

Boomers were a lot of things, but sci-fi nerds they were not. OK, a lot of them read Dune in college, but they were looking for deeper meaning (or something). The one comic book that caught ’60s college kids’ attention was The Silver Surfer, who was trapped in this world as punishment for trying to save it. Heavy.

And of course, there was Star Trek — which, I’ll remind you, struggled to stay on the air for three seasons.

But as Mr. Spock himself — the late Leonard Nimoy — once told me, no sooner did Lucas’s Star Wars hit the cover of Time magazine, than Star Trek creator Gene Roddenberry phoned him to say Paramount wanted a Star Trek movie ASAP.

The lesson of history: No Star Wars movies equals no Star Trek movies. That’s 13 Star Trek films with another on the way in 2023. It probably would also have meant we’d have seen none of the subsequent five Star Trek TV series, amounting to more than 700 hours of television.

From the Star Wars Universe to the Marvel Universe

The year I saw Star Wars was my first year in university and, somewhere, Billy Idol was just launching his band Generation X.

Being born in the late ’50s did not automatically make you a boomer then. But they arbitrarily moved the goal posts as I got older to define a boomer as any guy old enough to have his prostate checked. (Since amended, now that Gen-Xers have also begun paying attention to RRSP ads).

And the culture-wide appetite for “genre” entertainment was not yet whetted. I remember friends smirking at how enthused I was by this film with robots, princesses and a villain who looked like he was wearing the grille of a Studebaker on his head.

Though some adults read crime comics in the ’50s and “Underground comix” in the ’60s, comic books still carried the image of children’s reading material until the ’70s, when the first comic book stores were born (providing a handy set decades later for about 1,000 Big Bang Theory scenes).

The term “graphic novel” came into use in the Gen-X era, legitimizing superhero stories as adult worthy (though, to be fair, the category also encompassed what amounted to illustrated literature about everyday life by the likes of Harvey Pekar, Chester Brown, Daniel Clowes et al).

But again, it’s no coincidence that basically the first epic superhero movie ever, Superman, hit the big screen within two years after Star Wars. It was a slow embrace — 11 more years until the Batman films and 13 years after that before Spider-Man ignited the Marvel Universe.

But we’ve now reached the point where, as Canadian writer Stephen Marche has said, “being a movie critic these days is like being a food critic who’s only allowed to critique burritos.”

Of the top-10 highest grossing films of all time (as of January 2022), one is a Star Wars film — The Force Awakens (2015) at number four — while four are Marvel films (owned by Disney, which also owns the Star Wars franchise), and only one  — the number three film, Titanic — doesn’t involve sci-fi, magic, Disney epics or action heroes. (The number one spot is Avatar — meaning Canadian boy James Cameron, who directed both it and Titanic really is “king of the blockbuster movie world.”)

Of course, Star Wars is not confined to the big screen. Aside from future films, the recent popularity of the Emmy-winning Disney+ series The Mandalorian means that further Star Wars spin-off series are reportedly in the works, including ones that — like the 2021 release The Book of Boba Fett and the Obi-Wan Kenobi series premiering on May 27 — focus on individual characters from the movies.

I love Star Wars but, yeah, there is such a thing as too much of a good thing.