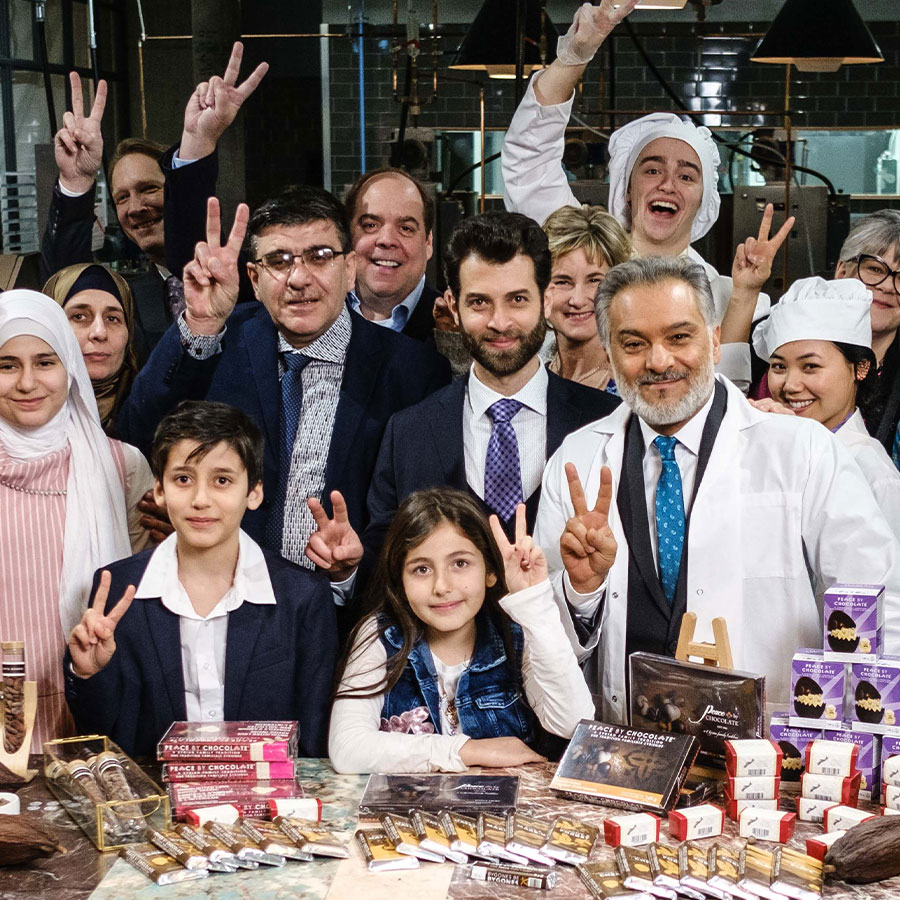 Actor Ayham Abou Ammar (centre, with beard and tie) plays Tareq Hadhad in the film about Hadhad’s family, ‘Peace By Chocolate.’ To his left, in the white lab coat, is actor Hatem Ali, who played Tareq's father Isameddin Hadhad, while on his right is the real life Isameddin and his wife, family matriarch Shahnaz Naisa. The film was intentionally cast with Syrian actors who, like the Hadhad family, were also refugees from or near Damascus and with similar accents. Photo: Abdul Malik

Stories don’t come more inspirational than the true-life intergenerational tale behind Peace by Chocolate, the new dramedy by Halifax-reared writer-director Jonathan Keijser that opens in select theatres across Canada on Friday.

Peace by Chocolate tells the true story of the Hadhad family, whose lives were upended in 2012 when their home — as well as the chocolate factory they had run in Damascus since 1986 — was destroyed in a bombing during the (still-ongoing) Syrian civil war. The family fled to Lebanon, where they lived as refugees for three years.

Eventually, Canada offered asylum, but in a location — tiny Antigonish, Nova Scotia — that the Hadhad’s likely wouldn’t have chosen for themselves. Nevertheless, the community, which sponsored the family, proved welcoming and supportive. Tareq Hadhad, an aspiring doctor, arrived in December 2015; his immediate family followed soon after.

Father Issam almost immediately began making chocolates in the family kitchen, selling them at a farmer’s market where they became a local hit. By 2016, Tareq and Issam founded the spiritually minded sweets company Peace by Chocolate, churning out beautiful and tasty handcrafted treats from a shed beside their house. Tareq’s dream of being a doctor would wait.

When Prime Minister Justin Trudeau cited the business and family as a success story in a late-2016 speech about refugees and immigration at the United Nations, tourists began turning up at the shed. Grocery chain Sobeys took notice, striking a distribution deal and offering the Hadhad’s a building that could be converted to a factory to expand production.

Today, Peace by Chocolate is a thriving and highly philanthropic business which donates a portion of proceeds to peace-building initiatives around the world while assisting refugees in Canada through employment and mentorship opportunities. Company CEO Tareq Hadhad uses public speaking as an opportunity to evangelize about the importance of community support for newcomers. The lightly fictionalized film Peace by Chocolate — shot mainly in an old Victorian house in Montreal in winter 2020 — tells the Hadhad’s story.

Tareq Hadhad spoke with Zoomer about the movie, seeing his family’s story on screen and why helping those fleeing war-torn regions such as Syria, Afghanistan, and Ukraine assists not just displaced people, but the host nation as well.

KIM HUGHES: It must feel great to finally have this movie coming out.

TAREQ HADHAD: This has been in the works since 2017 and we felt that telling our story was necessary because there is so much darkness and anxiety and hatred in the world right now. We wanted to share a story of kindness and community. That’s what’s most exciting for us. And it’s finally here!

KH: What’s it like to see yourself portrayed on screen by an actor?

TH: Surreal. I always felt I was following a conventional path in life like everyone else. When the war started, I reflected on how I could tell my story to a larger audience. A human being with a story is not a victim but a victor able to set the world on fire with truth and to inspire others. Seeing (actor) Ayham Abou Ammar as me on screen was not something I could have imagined. It feels out of this world.

KH: Did you have any hesitation about participating in this project?

TH: We had many conversations with the filmmakers. We weren’t restrictive about where the movie or the plot could go. We put a lot of trust in the filmmakers and there was a lot of people working on this movie. For sure there were dramatic additions and conflicts added to make things more cinematic. But I think this is a feel-good movie representing joy and happiness and that the most important aspect of our story — that community is not where you are born but where you find your sense of identity — is intact.

KH: The casting of the film was quite specific, using not just Syrian actors but Syrian refugees from or near Damascus with accents similar to your own. That certainly boosts the authenticity quotient.

TH: It does. And hats off to everyone who paid attention to those details. We were lucky because what are the odds of finding people like that in Canada? The actors who played my sister, mom, and dad (respectively, Najla Al-Khamri, Yara Sabri and Hatem Ali, who died in late 2020 and to whom the film is dedicated) had exactly the right accent. News of the movie has since travelled to the Middle East and people there are expecting it in June. That extra effort with accents and costumes and culture — the foods we eat or how we pray — really pays off while avoiding stereotypes. The film also shows how our family was willing to integrate into the community from day one. In Canada, the process is not assimilation but integration. We were welcome to bring our culture to Canada.

KH: Have you ever wondered how things might have turned out if instead of Canada, you had immigrated somewhere else?

TH: I think about that every single day. Our story has many ingredients: flexibility, resiliency, compassion, and kindness. The way the community of Antigonish and the province of Nova Scotia welcomed and accepted us was incredible. Ours is not the only story of refugees succeeding but our story is a way of showing what’s possible when all those ingredients come together. To be honest, I applied to enter lots of countries: Australia, the U.S., France, Portugal, but no one opened the doors for us. My mother said to me, ‘I know we will get called to the right country.’

KH: Justin Trudeau’s famous mention of your family during a United Nations speech is featured in the film. Did you know, in real-life, that that was going to happen ahead of time?

TH: No! We were having dinner as a family and my phone suddenly lit up. I have met the Prime Minister many times since 2016, and we have developed some close connections. I’m just so grateful and honoured that our story is on the world stage. Luckily our business was built before that speech. It was easier to prove the narrative of [successful] immigration with examples that the Canadian government could show to other nations: that when you have a sponsorship program and open doors, good things can happen.

KH: And did you really drop Trudeau’s name to a surly U.S. border guard, as Tareq is shown doing in the film when you were detained while crossing?

TH: I did. I was driving from Montreal to Vermont where I had been invited to speak. I had all the correct documents including an invitation from the governor but, when I arrived at the U.S. border, they didn’t ask to see my documents. They asked where I was from. This was early 2017; I was not yet a Canadian citizen. Being a Syrian man at the U.S. border was to be not welcome. It was hurtful to think that human beings could be treated differently based on where they were born — which is something none of us have control over — or because of the faith they practice.

KH: Now that it’s about to screen, what will success look like for you with this movie?

TH: If we change even one person’s mind about immigration and the return on kindness, like a business-inspired return on investment — but helping those fleeing war and persecution — then we have a win. I know how hard it is to change minds. But our story is the proof that anything is possible.

Peace By Chocolate is in select theatres across Canada. Click here for the full list of screening locales.