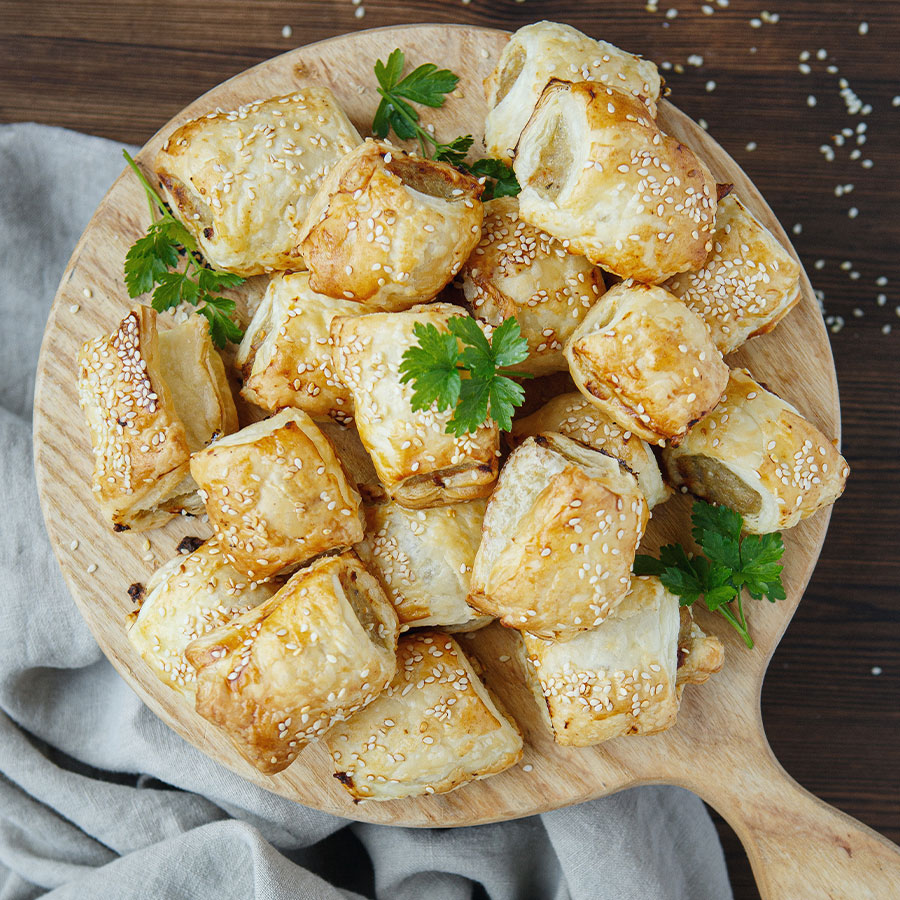 "The Platinum Jubilee Cookbook," celebrates the multicultural influence in British cuisine with recipes from British embassies all over the world, including a delicious take on sausage rolls from Botswana. Photo: Anwar Hussein/Getty Images

A new palace-approved cookbook celebrating the Queen’s 70th year on the throne hit shelves recently, but don’t expect to find a tome full of recipes for British classics like fish and chips and puddings when you pick up your copy — at least not exclusively.

The Platinum Jubilee Cookbook, created by British diplomat, chef and food writer Ameer Kotecha, features 70 recipes from British embassies all over the world.

“I’ve always had an interest in food, and I’ve been trying for a long time to find a way to bring food and diplomacy together,” he tells The Herald of the book, which he likens to a “Foreign Office recipe collection.”

“In some cases, it’s proudly British foods — like Victoria sponge with a Union Jack sticking out of it. But in other cases, it’s properly authentic local food, because it’s a way of showing respect and appreciation for the local country the British diplomats find themselves in,” he says. “And then sometimes it’s a fusion of the two — some of my favourite recipes from the collection are the fusion dishes.”

Those creations include a dish once enjoyed by Charles and Camilla, a combination of beef Wellington with one of Malaysia’s most famous dishes, a rich and tender coconut beef stew called beef rendang.

The future King and Queen Consort seem to share Kotecha’s sentiment about the mixing of traditions. In a forward the royal couple wrote for the book, they stress the importance of multiculturalism in Britain’s culinary evolution.

“Seventy years ago, when The Queen came to the Throne, the culinary outlook in the United Kingdom was bleak: several foods were still rationed and the meagre choice of ingredients on offer posed a challenge to even the most creative cook,” the forward reads, referring to the rationing that was placed on everything from sugar and butter to bacon and even tea that continued well beyond the end of The Second World War.

“Today, our tastes have been transformed, more than ever before we welcome one another’s culinary heritage into our homes — and, for this, we are deeply grateful.

“Some of the recipes in this wonderful collection from our network of diplomatic posts are authentically local; some are proudly British; and others represent the coming together of British and local influences, often to spectacular effect,” the forward adds of the book.

“That lack of variety in the early years of the Queen’s reign may account for what Kotecha calls her ‘humble’ tastes, especially when compared to the late Queen Mother.

“The Queen Mother was known to like these quite extravagant, retro dishes like eggs drumkilbo [a cold and decadent appetizer of eggs and lobster], which apparently she used to eat five times a week or something like that, but the current Queen has surprisingly humble tastes.”

As for uncovering any specific dishes from the Queen’s royal menu for the book, Kotecha admits he had little success.

“You’d be unsurprised to hear the palace is very cagey about sharing details of the Queen’s dietary preferences,” he said.

Still, Kotecha — who’s served as a member of Her Majesty’s Diplomatic Service in New York, West Africa, Hong Kong and in London, where he ran a popup restaurant on evening and weekends — hasn’t let his high-level culinary security clearance go to waste.

Recipes from the book include Mince Spies (pies for the less pun-inclined) from “C,” the head of MI6, the U.K.’s Secret Intelligence Service; Spanish marmalade from the Madrid embassy; and green fish curry from the Islamabad high commission.

In over five years as a diplomat, he says he’s seen what’s been termed “gastrodiplomacy” in action.

“If you invite someone to have lunch or dinner and you do the softer side of diplomacy — it’s amazing how much more progress you can make,” he says. It’s almost like winning hearts and minds through people’s stomachs — it’s very powerful as a tool.”

Meanwhile, the Prince of Wales and the Duchess of Cornwall are counting on food playing an important part in the decidedly less tense occasion of Her Majesty’s Platinum Jubilee celebrations next month.

“As we come together as a nation, in the Realms, and across the Commonwealth to celebrate Her Majesty’s Platinum Jubilee, food will no doubt play a central part in our public and private celebrations,” they write.

“We only hope that this book provides you with both pleasure and inspiration, and that food continues to bring you together with family, friends, neighbours and your community.”

Here, we bring you a pair of mouthwatering recipes from the book, including a Canadian submission.

Maple Pickled Onions From the British High Commission in Ottawa

4 x 475ml jars, or 2 x 950ml jars (sterilised in a low oven, or by washing at the hottest dishwasher setting

To peel the onions, cut off the ends and place the onions in a heatproof bowl. Pour over the boiling water and let the onions sit in it for 1–2 minutes. Drain them and rinse them with cold water, then the skins will simply slide off.

Put the peeled onions in a bowl, sprinkle with the salt and cover with cling film. Leave them to sit at room temperature for 12 hours or overnight, then rinse and dry them thoroughly.

To make the brine, combine all the brine ingredients in a saucepan and place the pan over a medium–high heat. Bring the liquid to the boil, then remove the pan from the heat. Skim out the spices using a mesh strainer or fine sieve, and save these for later.

Tightly pack the warm, sterilised jars with the onions and pour over the hot brine, ensuring the onions are fully covered. Redistribute the spices between the jars so that each jar contains some spices.

Slide a knife or wooden skewer into each jar, to release any air bubbles trapped inside. Screw the lids on the jars while still hot, to create a seal, then leave to cool. Store in a cupboard or on the work surface for 2–3 days, or in the fridge for up to 3 months.

For the Puff Pastry

Place the beef in a heavy saucepan with the salt and pepper, and enough water to just cover. Place the pan over a high heat and bring the water to the boil. Reduce the heat and simmer, covered, until the meat easily falls from the bone — about 2-2 1/2 hours. Keep adding more water if the pan is running dry.

While the beef is cooking, make the puff pastry, if necessary. Sift the flour and salt into a large bowl. Break the butter into small chunks and rub them into the flour, until combined but with visible lumps. Make a well in the centre and gradually mix in about 100 ml of cold water, until you have a firm, rough dough. Be careful not to overwork the dough. Wrap the dough in cling film and rest it in the fridge for 20 minutes. Turn out your rested dough on to a lightly floured work surface and knead gently, then form it into a smooth, fat rectangle. Roll out the dough (in one direction only) until it is about 20 x 50 cm. Try to keep the edges straight, and don’t worry if you can see streaks of butter — it should look a little ‘marbled.’

Fold the top one third of your dough rectangle down over the middle third and then fold the bottom third up and over that. Give the pastry a quarter turn and then roll it out again until it is about three times its starting length. Fold in thirds as before and then wrap the dough in cling film again and chill it again for at least 20 minutes, or until the beef is ready.

Once the beef is cooked, tip out any excess water and then pound the beef with a meat mallet or heavy wooden spoon until it has a ‘shredded’ appearance.

Spread a thin layer of mustard over both pieces of pastry (more if you like more bite!), leaving a 2-cm border around the edges. Then divide your seswaa (shredded beef) in half, and use each half to form a ‘sausage’ along the longer edge of your pastry pieces.

Paint the edge of your pastry with the beaten egg, then wrap the pastry around your seswaa sausages. Press the tines of a fork along the join, to make sure the filling is tightly sealed. Then, use a sharp knife to cut each roll into pieces of the desired size — around 2-3 cm is good for finger food, but it’s really up to you.

Brush some more of the egg wash over the tops of the rolls and then place them on a lined baking tray and cook then in the oven for 25-35 minutes (depending how large they are), or until pastry is puffed up and gold and filling is piping hot. Serve warm.