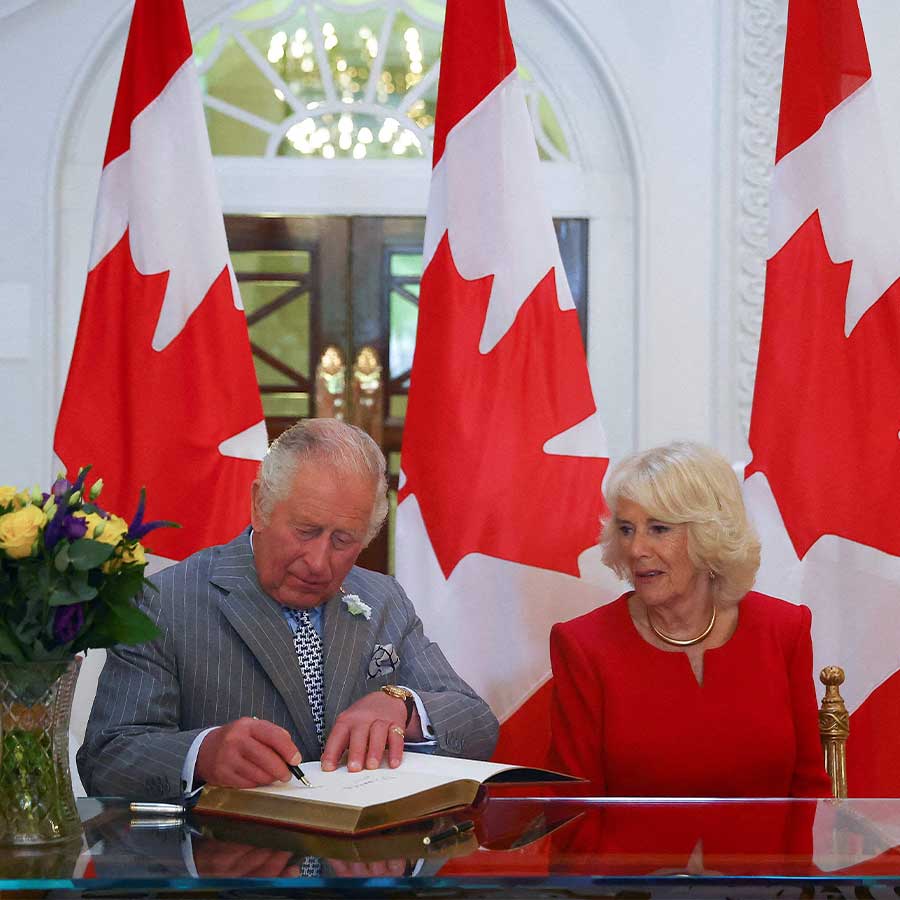 Britain's Prince Charles (L), Prince of Wales, and his wife Camilla, Duchess of Cornwall, sign a guestbook during a visit to Canada House in London on May 12, 2022. Photo: Hannah McKay/POOL/AFP/Getty Images

The Prince of Wales and the Duchess of Cornwall visited Canada House in London on Thursday ahead of their three-day royal tour of the country, which starts next week.

Camilla previewed a bit of diplomatic dressing for the occasion — which will no doubt be on display throughout the trip —  donning a red dress that matched the jackets of the Canadian Mounties who saluted the couple on their arrival.

The royals were greeted by a group of enthusiastic school children waving Canadian flags, including one little girl who took diplomatic fashion up a notch with a Maple Leaf patterned dress.

The pair met with the High Commissioner for Canada in the U.K., his excellency the Hon. Ralph Goodale and his wife, Mrs. Pamela Kendel-Goodale.

The Canadian tour, beginning on Tuesday, is part of ongoing celebrations for the Queen’s Platinum Jubilee this year and is the royal couple’s first trip to North America in five years. The tour will see Charles and Camilla travel 2,000 miles from Newfoundland and Labrador to the Northwest Territories, including a stop in the Ottawa region, where a special reception to mark Her Majesty’s Platinum Jubilee will be held.

Clarence House announced more details of their visit last month, revealing the tour would have an environmental focus led by Canada’s Indigenous communities.

“The Prince of Wales has long believed that we need to learn from indigenous peoples around the world how better we should live in and care for nature and the planet,” Clarence House said in a statement.

“Canada is seeing the impact of climate change and so this tour will highlight an emphasis on learning from Indigenous Peoples in Canada as well as a focus on working with businesses to find a more sustainable way of living with global warming.”

The increased focus on social consciousness for the upcoming tour follows the Duke and Duchess of Cambridge’s tour of the Caribbean, which was met with protests and calls for reparations from Britain for its role in the slave trade in the region.

Charles and Camilla will also highlight Canada’s support of Ukraine, in the wake of Russia’s invasion, and meet members of the country’s Ukrainian community.

The tour will also include a visit to a transitional housing facility for women and children in Yellowknife, a stop along the tour that aligns with Camilla’s charity work against domestic violence.

Clarence House first announced the visit on Instagram, citing the Royal Family’s “close relationship” with Canada and sharing photos of Prince Charles and the Queen during their past visits.

“The Prince and The Duchess are looking forward to returning to Canada following their last visit in 2017,” the post’s caption reads.

The tour will mark the future King’s 19th visit to Canada and the fifth for Camilla, whom the Queen confirmed in February as the future Queen Consort.

The Queen, who made her first visit to Canada as princess in 1951 along with her husband Prince Philip, has embarked on more than 20 official visits to the country, once calling it her “second home.”

Prince Charles appears to share that sentiment. Arriving in Halifax during their 2014 tour of Canada, he said it was “a special joy to be back in Canada again,” adding that they’re “always made to feel very much at home in Canada.”

Mary Simon, Canada’s first Indigenous Governor General, confirmed news of the tour in a statement last month, saying that she and her husband Whit would “be delighted to welcome Their Royal Highnesses The Prince of Wales and The Duchess of Cornwall to Canada.”

“This visit is a chance for us to showcase the evolution of our country, our diverse and inclusive society, as well as the resilience of Indigenous communities,” she said in the statement.

Prime Minister Justin Trudeau, who was the Queen’s first official in-person visitor after she recovered from COVID-19 in March, said Prince Charles and Camilla will “have the wonderful opportunity of seeing first-hand the diversity and kindness of Canadians and the beauty of our abundant natural landscapes that make us proud to call our country home.”

“The Royal Tour, which coincides with this historic milestone, will be an opportunity for Their Royal Highnesses to take part in various initiatives to honour The Queen’s service and dedication to our country, and meet with inspiring Canadians who are making a difference in our communities,” Trudeau added in his statement.

Will Canada Roll Out the Royal Welcome Wagon?

While the royal couple will likely receive a warm welcome in Canada, residents of several Commonwealth countries haven’t been rolling out the red carpet for the royal family as of late.

On their recent tour of the Caribbean, Prince William and Kate, Duchess of Cambridge were met with protests and public demands for reparations for the monarch’s past support of slavery in the once British-owned colonies. And, during their final stop in Jamaica, the country’s prime minister personally informed the royal couple of plans to remove the Queen as head of state to become a republic — a move that Barbados made just this past year.

Meanwhile in Canada, where William and Kate made their first royal tour as husband and wife in 2011, the relationship with the monarchy is less contentious. Still, with the monarchy falling on some rough times — from the exit of the Duke and Duchess of Sussex to Prince Andrew’s spectacular fall from grace — Canadian support for the upcoming tour isn’t necessarily guaranteed.

Like other Commonwealth countries, many here are questioning the Queen’s role as head of state. A recent Research Co. survey found that 49 per cent of Canadians would prefer an elected head of state over a king or queen, with only 21 per cent preferring the monarchy.

Meanwhile, the survey also found that 64 per cent of Canadians viewed the Queen favourably, while Prince Charles was among the most unpopular royals at only 35 per cent.

However, the ongoing popularity of royal visits suggests that there is still a strong royal sentiment in this country.

“Canadians vote with their feet every time there is a royal visit to Canada,” Bruce Hallsor, a representative from the Monarchist League of Canada, said in an interview with CTV, describing the crowds that inevitably flock to see the royals.

As for Prince Charles, Hallsor explained that his popularity would likely improve after he takes the throne.

“In countries that are republics, it’s always tough being the vice president,” he said. “And I think in the monarchies of the world you will actually find that the reigning monarch has much higher approval than the next in line.”