The Branded Bride: How Kourtney Kardashian and Travis Barker Turned Their Wedding Into a Lifestyle Event 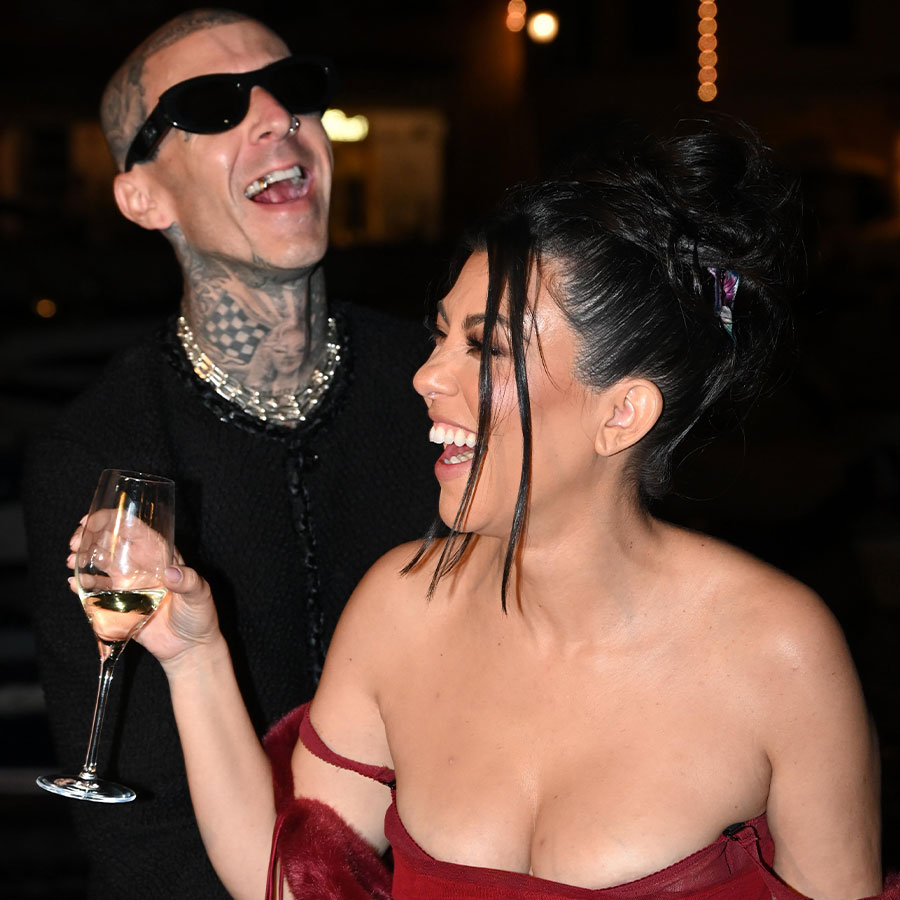 Travis Barker and Kourtney Kardashian celebrate at dinner the day before their Portofino wedding, on May 21, 2022. Photo: Press Association/Canadian Press

Love them or hate them, the Kardashians turned their family into reality TV’s reigning franchise, then pioneered social media monetization by fashioning themselves into individual brands — and made billions doing it. Now, expanding into new territory, Kourtney Kardashian has introduced the celebrity wedding as branded lifestyle event.

While designers have long produced wedding dresses for famous women in exchange for publicity, the Portofino wedding of Kourtney Kardashian, 43, to Blink-182 drummer Travis Barker, 46, last Sunday (May 22) saw Dolce & Gabbana style the entire event, dressing every guest — including multiple wardrobe changes per day — for an event that was equal parts wedding extravaganza and three-day ad campaign for the Italian fashion house. One pictures the Beckhams kicking themselves for not coming up with this idea last month, when son Brooklyn got hitched to model Nicola Peltz with a US$4 million bash in Palm Beach.

Boasting a combined Instagram cache of more than one billion followers, Kardashian sisters Kourtney, Kylie (Jenner), Khloe, Kim and momager Kris did their part. Twenty-one posts in all, tallied W Magazine, not including “Instagram Stories, TikToks and other social media posts made throughout the weekend — of which there were many.” Curiously, supermodel sister Kendall Jenner opted out of adding to the social media flurry, while Kardashian brother Rob declined to attend at all to avoid exactly that.

After D&G co-founder Stefano Gabbana dissed the Kardashian-Jenner ladies as “the most cheap people in the world” in 2018, he and business partner Domenico Dolce were well over that assessment last weekend in Portofino. Instead they ferried guests around in speedboats spiffed with signature D&G pillows, housed the family at their seaside manse, Villa Olivetta — which also served as the site of the lavish ceremony — and offered the blissful newlyweds the Regina d’Italia, their glitzy superyacht swathed in Oligarch-worthy acres of marble, gilt and leopard skin, with ruby and sapphire adorned gold bathroom fixtures and a 167-foot inflatable water slide.

Kardashian and Barker got married three times. The first was a “practice” run in Las Vegas without an actual marriage license in April, then legally at the Santa Barbara courthouse earlier in May and, finally, the high-camp religiosity that was their Italian Riviera ceremony and reception last weekend. Non-Catholic Kourtney drew the ire of the faithful as she plastered the Virgin Mary on every outfit as a style choice. Strolling around Portofino, spilling out of a barmaid’s dress bizarrely accessorized with a massive Virgin Mary medallion and black veil, she then made her vows draped in 30 feet of a handmade lace veil embroidered with the face of the Madonna — an image that mirrored the large tattoo that graces her groom’s fully inked head. “Garish, sacrilegious, and very, very far from God’s light,” cracked Gawker while social media detractors slammed the Catholic Cosplay as “mockery” or were generally offended by the reality star’s mix of miniskirts and the Virgin Mary.

With a penchant for dressing would-be dictators wives, producing what some called a racist bijoux, and making gaffes that insult everyone from their own LGBT peers to all of China, D&G was in need of a marketing boost — and got one. A D&G affair, right down to colourful china from the brand’s homeware collection, the Milanese designers were perhaps inspired by what Kim Kardashian’s Balenciaga-clad divorce did for that label. As Forbes reported that the Portofino wedding “proved Dolce & Gabbana can’t be cancelled,” a rep for the company told Page Six Style that “the designers were happy to host this very special occasion” — one that had already earned the company US$25.4 million in “media impact value” according to the brand performance firm Launchmetrics.

“They were new money, without a doubt: so new it shrieked. Their clothes looked as if they’d covered themselves in glue, then rolled around in hundred-dollar bills”  ―Margaret Atwood, The Blind Assassin