VoxBox: The Successor to the Legendary Speakers Corner Arrives in Liberty Village 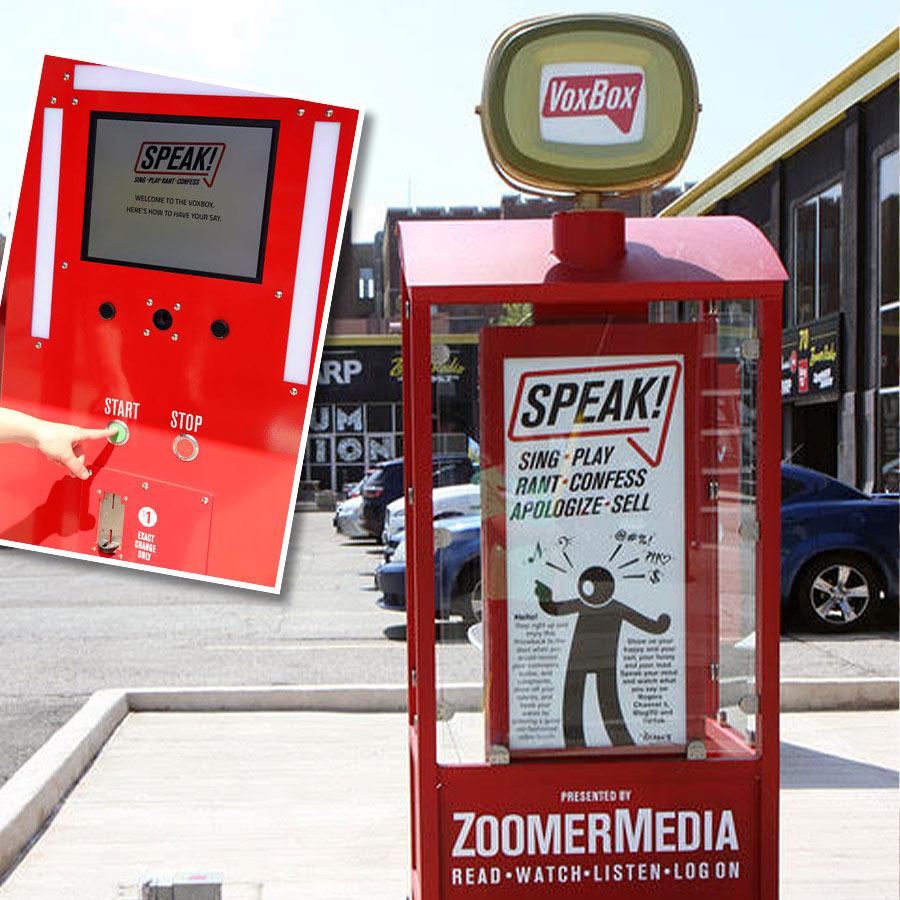 The VoxBox — a successor to the legendary Speakers Corner booth that stood in downtown Toronto for years — is now up and running in the city's Liberty Village neighbourhood. Photo: ZoomerMedia

Decades before social media and smartphones put a personal soapbox in the palm of our hands, there was Speakers Corner.

Created by ZoomerMedia founder and CEO Moses Znaimer, the red booth — first established at the corner of Queen and John Streets (at the Citytv headquarters) in downtown Toronto in 1987 and later replicated in other Canadian cities — allowed anyone to step inside, pay a dollar and receive two minutes of video recording time to perform, rant, wax poetically, make announcements, propose marriage and pretty much anything else you can think of. The best submissions received TV air time and, famously, helped launch the careers of acts like The Barenaked Ladies and comedians The Devil’s Advocates.

And now, the 21st century iteration of Speakers Corner is here.

VoxBox officially went live outside of the ZoomerPlex (a ZoomerMedia property) in Toronto’s Liberty Village this week. The red booth, emblazoned with the words “Speak, Sing, Play, Rant, Confess, Apologize, Sell,” is open to visitors who want to take a seat, press the green button and have their say. The best videos will appear on Rogers Channel 5 and on TikTok at @SpeakTO. The team at blogTO (another ZoomerMedia property), will handle the curation.

The VoxBox is currently free, but will eventually cost one dollar, like its predecessor. All proceeds will go to the St. Felix 24-Hour Respite Centre in Liberty Village.

Meanwhile, the ZoomerPlex itself is part of this weekend’s Doors Open event. As noted on the Doors Open site, the complex is home to various ZoomerMedia print, digital, television and radio properties, as well as the MZTV Museum of Television, “showcasing the largest collection of vintage TV sets in the world.”

Moses and Music: From City to Zoomer Exhibit Opens in Toronto