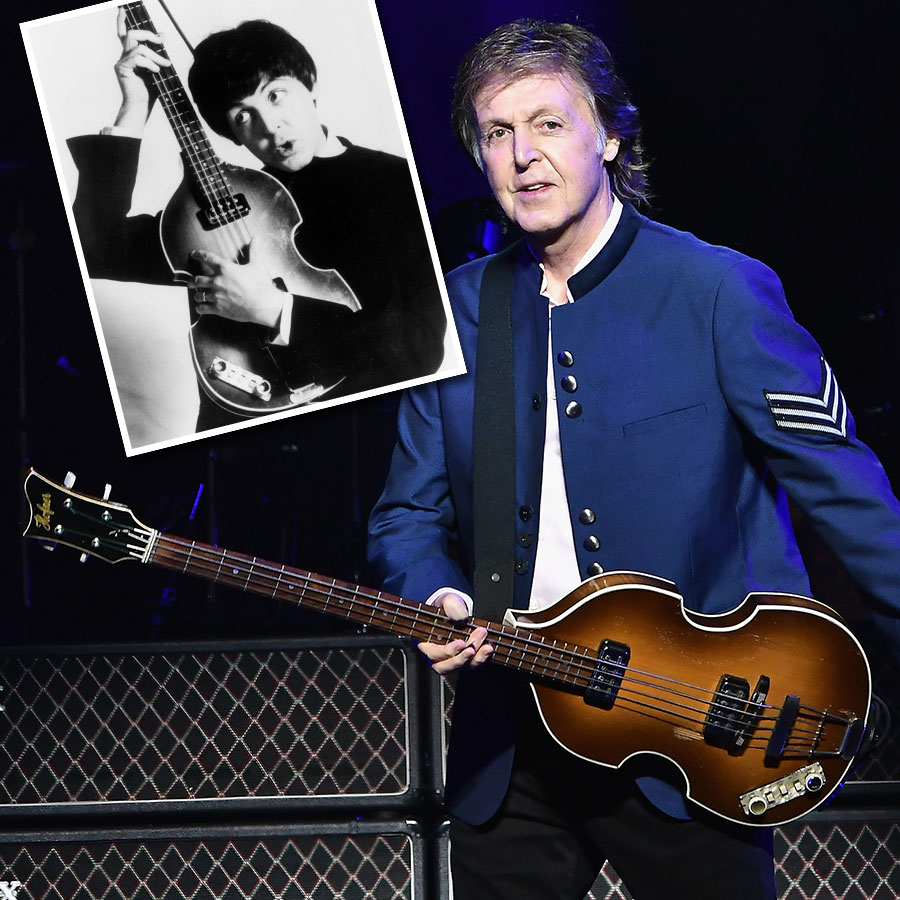 For Paul McCartney, the aging process has never been a linear one.

To start, some fans had already killed him off way back in 1967 — the year he turned 25 — via the famous “Paul Is Dead” rumour that began gaining traction at that time. The same year, his Beatles classic “When I’m 64” — which he began writing as a teen — appeared on the band’s seminal Sgt. Pepper’s Lonely Hearts Club Band album. In the song he describes age 64 as a time of hair loss, gardening, playing with grandkids, cottaging and knitting “a sweater by the fireside.”

When, however, McCartney himself turned 64, the New York Times noted that his life resembled precious few of the ideas put forth in his famous tune, adding, “while he may not be living his own lyrical vision, McCartney seems closer to fulfilling Bob Dylan’s ‘Forever Young’ than Pete Townshend’s ‘Hope I die before I get old.’”

The idea of “Forever Young” proved prescient when, last year, in a music video for his tune “Find My Way” from the 2021 disc McCartney III Imagined, the music legend, then-79, was digitally de-aged to resemble his mop-topped 1960s Beatle persona (you can see the video below).

Also in 2021, he declared in an interview that he wouldn’t write a memoir because, “I’m not old and I’m not retiring.”

And so, as Paul McCartney turns 80 on June 18 — an occasion that will no doubt leave many Fab Four fans asking where the time has gone — he does so with an air about him as youthful as those early days spent playing gigs at Liverpool’s Cavern Club.

Of course, that youthfulness didn’t come without work on McCartney’s part. Here, we look at five lessons about aging we’ve learned from Paul McCartney.

It sounds obvious — even trite — but diet and exercise are a big part of McCartney’s longevity secret.

The ex-Beatle touted his vegetarian diet dating back to the ’70s, but in 2020 he also told the hosts of the Smartless podcast — actors Will Arnett, Jason Bateman and Sean Hayes — that he has a workout routine that he does on his own, without a personal trainer. It includes stretching on a mat and using a foam roller, then moving to cardio on an elliptical or simply running, all topped off with the famous headstand that he’s impressed people with for decades.

In a 2016 interview with the Mirror, McCartney noted that he learned the headstand in the ’60s as a part of his yoga routine — another healthy practice, along with meditation, for which he’s known. McCartney added that “my argument is I need flexibility not strength” and recalled times he’d surprised patrons with his headstand in a public gym.

“What’s cool about it is that I’ll be in the gym with all these guys doing really big weights, whilst I’m there doing not big weights, and afterwards, when I’ve done my headstand for about five minutes, these big guys will come up to me and say, ‘That was pretty impressive, man!’”

As noted, McCartney is a longtime yoga practitioner. But last year, he spoke about the virtues of eye yoga on the podcast Table Manners, hosted by singer-songwriter Jessie Ware, and noted that he learned about it from a yogi during a trip to India a little over a decade ago.

“He explained that your eyes are muscles whereas your ears aren’t, so you can’t exercise your ears. But your eyes, you can,” McCartney said on the podcast. He also noted that he doesn’t need glasses, and that “I don’t know if it means that that’s why I don’t need glasses when I’m reading a newspaper. It makes sense, you know? It’s a good idea.”

And if you’d like to see the superstar in action doing eye yoga, check out the video below, which was originally posted to YouTube in 2010.

Mental health awareness is much more prevalent today than it was in the Beatles’ heyday. And Paul McCartney made headlines in 2020 when he opened up about the mental health issues that the band faced during the height of their fame and following its breakup. He noted that he and others in the band sometimes turned to alcohol to deal with the struggle, as well as often working out their emotions through their song lyrics.

“You know, John would. ‘Help! I need somebody,’ he wrote. And I thought, ‘Well, it’s just a song,’ but it turned out to be a cry for help,” he told The Sunday Times.

He also noted, in an interview with GQ that same year, that meeting his first wife, Linda McCartney, helped him figure out a better way to cope with his own struggles.

“I remember when I first met Linda, she was divorced with a child and living in New York and having to fend for herself. She got depression and I remember her saying she made a decision. She said, ‘You know what? I’m not going to have this depression, because if I do I’m going to be in the hands of other people. And I’m not going to allow that to happen.’”

McCartney said that her attitude inspired him to take action to combat his own depression, “by saying, ‘OK, this is really bad and I’ve got to do something about it.’ So I did. And I think that’s my way, almost by being my own psychiatrist. You say, ‘This is not cool. You’re not as bad as you think you are,’ and all of the things. So you start to think, ‘OK.’”

He went on to say that when he felt his depression coming on, he’d counter it “by persuading myself that it wasn’t a good idea to give in to my depression and my doubts. I had to look for ways.”

Of course, each person’s mental health struggles are different and not everyone can get a grasp on them without professional help or by being their own psychiatrist. But the idea of recognizing one’s mental health struggles — and the bad/destructive habits they may lead to — and making a conscious effort to take action to confront them and try to get a handle on them is certainly a part of the recipe for living and aging well.

Perhaps more than any other performer on Earth, Paul McCartney could have easily spent decades living off his own nostalgia, playing Beatles favourites to packed concert crowds and releasing remaster after remaster of his old work. But he hasn’t.

To this day, McCartney’s ethos is to keep moving forward, trying new things and keeping busy with his passions.

In a profile on McCartney in The New Yorker last year, the magazine’s editor David Remnick discussed how the Beatles considered Paul to be “the band’s insistent engine, the one pushing them to get the work done.” Ringo Starr told Remnick, “If it hadn’t been for (Paul), we’d probably have made three albums, because we all got involved in substance abuse, and we wanted to relax.”

Remnick added that McCartney, “continues to write and record, just as he continues to breathe —’It’s what I do,’ he told me.” And when answering the question of why McCartney keeps working on new projects and hitting the road, the singer replied, “I plan to continue living. That’s the central idea.”

It’s why, in 2020, while isolating on his farm with family during the pandemic, McCartney picked up a few instruments and recorded a whole album on his own — McCartney III, a celebrated collection of work that earned critical praise and two Grammy nominations.

He also released a new children’s book — Grandude’s Green Submarine — as well as his highly anticipated tome, The Lyrics: 1956 to the Present, while continuing work on other projects.

And later this month, he’ll become the oldest performer to ever headline the famed Glastonbury Festival.

It’s all a testament to both McCartney’s energy, as well as his willingness to remain engaged and challenge himself creatively.

After all, McCartney, perhaps inadvertently, offered a nugget of life wisdom in 2005 when he spoke with Time magazine about balancing his classic tunes with new work at his concerts, noting, “you have to move forward as well as go back. As they say, the show must go on!”

“People say, ‘Do you believe in magic?’ And I say, ‘I’ve got to.’ And I don’t mean, you know, Gandalf or wizardry or that sort of thing necessarily. For me, it’s how life can be magical, these things that just came together,” McCartney told GQ in 2020 when discussing how the members of the Beatles met. “The whole thing was magical.”

The idea of McCartney believing in the magic of life tracks with what feels like the unwavering optimism of his personality. And lets be fair — McCartney’s taken an emotional beating over the years, from vilification coming out of the Beatles’ breakup and negative critical reactions to his solo work to the heart-wrenching and untimely deaths of loved ones like his mother, his first wife Linda McCartney, and bandmates John Lennon and George Harrison.

And yet, as journalist Steve Baltin wrote in Forbes earlier this year: “The eternal optimism of McCartney, at least publicly, is the ninth wonder of the world. Most perceptive people … know the world is pretty screwed in 2022. Racism, war, poverty, hatred, inflation, class warfare — these are dark times that see us as divided as ever. Yet, when you watch McCartney — who is a very intelligent person and not oblivious to the horror of the world around us — you feel that not only does he still believe in Santa Claus, he may have had dinner with him the night before.”

McCartney’s optimism has long been on display to fans, from his earliest Beatles days.

Jon Friedman, a professor of the Beatles’ history and author of the e-book Goo Goo Ga Joob: Why I Am the Walrus is the Beatles’ Greatest Song, observed recently that, “As a songwriter in the Beatles, (McCartney) was the one who sang ‘it’s getting better all the time’ even as his songwriting partner, John Lennon, answered with a smirk in the same song, ‘It couldn’t get much worse.’ McCartney sang, ‘We can work it out.’ When the Beatles were in the process of breaking apart and McCartney was distressed, he solved his existential crises by counselling, ‘Let it be.’ He urged us to ‘Take a sad song and make it better.’ He believes in yesterday. You say goodbye. Paul McCartney says hello.”

And throughout his life, McCartney has managed to keep an optimistic air about him even through the bad times. Friedman also pointed to an interview McCartney gave to Howard Stern in 2009 in which the singer discussed his approach to dealing with sadness and personal loss.

“I’ve lost both my parents. I lost John, lost George, lost Linda. It’s very tough. You want them back. You want them back all the time. But I think in the end, you do what I do, what most people do: just remember the great stuff.”

Of course, numerous studies over the years have come to the similar conclusion that those who remain optimistic and happy as they age tend to enjoy a longer, healthier lifespan. So maybe McCartney is on to something, as he smiles his way into his 80th birthday year.

“I’ve always been an optimistic person, because I don’t like the alternative!”  he told RTÉ last year. “I know life’s difficult for a lot of people, but I think a positive thought is often a great help. You’ve got to train yourself not to think the worst.”

Characteristically, he added the happy thought: “I always try and see the good side — the silver lining — and if you’re lucky, it arrives.”