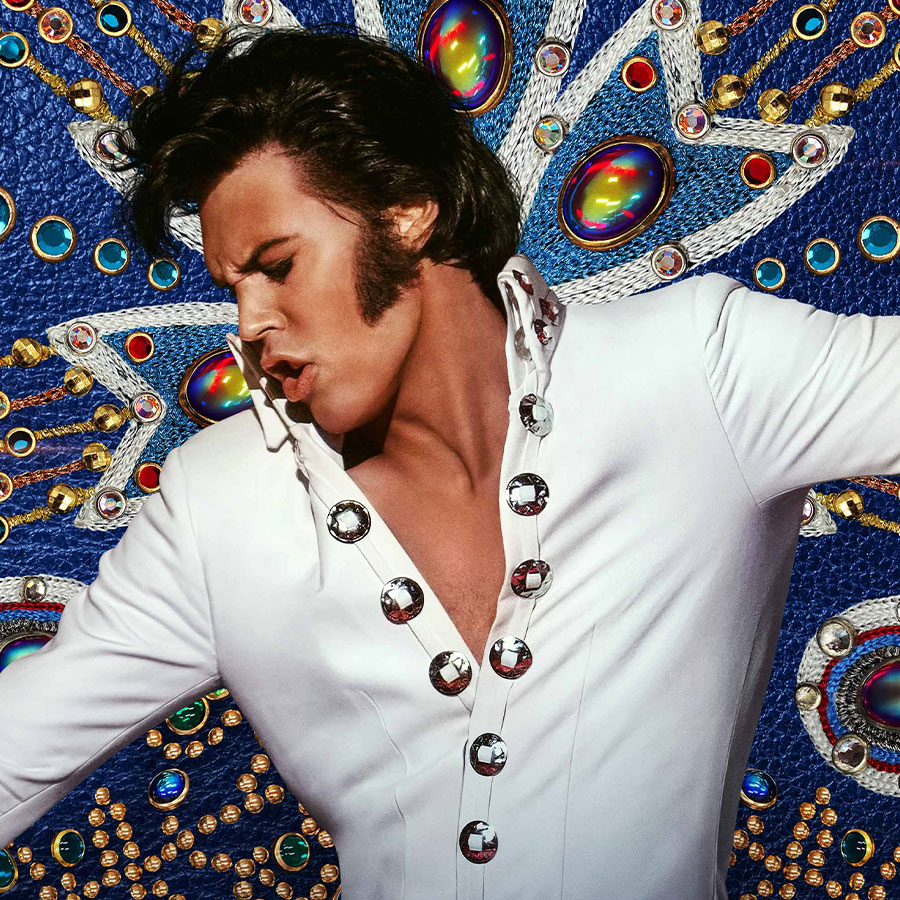 Austin Butler — seen here as Elvis in the movie poster for Baz Luhrmann's new biopic on the king of rock 'n' roll — said he used his role to "explore the humanity" of the music icon. Photo: Alon Amir/EPK

After taking on The Great Gatsby in the 2013 screen adaptation of F. Scott Fitzgerald’s famed novel, Australian director Baz Luhrmann now turns his lens to the mega-star behind “Blue Suede Shoes.”

Much like Gatsby, Elvis is a one-word entrée into Americana. Both, after all, instantly summon up a host of associations and feelings, even if they are sometimes only implied, or adjacent to the truth. Just think of the daffy invites sent out for Gatsby-themed ’20s parties, as if hosts are oblivious to the novel’s tragic ending, with a dead man floating in the pool.

Likewise, Elvis, the man, is whisked so thoroughly into Elvis, the myth — with all the weirdness and excess, the camp factor and the conspiracy theories — that the person behind the personality seems almost nonexistent.

That is precisely what attracted U.S. actor Austin Butler, 30, to take on the role in the jukebox biopic, Elvis, which premiered at the Cannes Film Festival in May and hits theatres on June 24. The challenge was “to explore the humanity of someone who has become the wallpaper of society in a way,” he explains in a virtual press conference. “He’s held up to superhuman status. To get to explore that and learn the way he was, and find the human within that icon, that was really such a joy.”

Part of the allure, too, is that Elvis helped invent the modern notion of teenagers, with their own market whims and taste-making muscle; before him, the bridge between children and adults was a foggy one, at least as a distinct demographic. But can Elvis make the king of rock ’n’ roll new again for the TikTok generation? That’s part of the calculus here.

The movie purports to tell the story of Elvis Aaron Presley, born Jan. 8, 1935, in East Tupelo, Miss., 35 minutes after his identical twin brother, Jesse, who was stillborn. The one who was the first member of his family to earn a high school diploma, and after graduation, worked in a machinist shop before diving into music with the 1954 recording of “That’s All Right.” The star on the rise who, at 22, shelled out US$102,500 for Graceland, the five-hectare (14-acre) Memphis, Tenn., property with a mansion that served as his private playground until his demise at 42. (His 1977 bathroom death gave fodder to supermarket tabloids for years and years to come.)

Elvis first fell into the fangs of extreme fame when he made a seminal appearance on the Ed Sullivan Show on Sept. 9, 1956, with approximately 60 million people — more than 80 per cent of the entire TV-viewing audience at the time — in his thrall. A year and a half later, he was drafted into the U.S. army for the Korean War, which attracted unreal media coverage as he served in Germany, where he met his future wife, Priscilla Beaulieu, the 14-year-old daughter of a U.S. air force captain. (Ten years her senior, Elvis had a relationship with Priscilla that would raise eyebrows today. They dated long distance until she moved to Memphis at 18, but in her 1985 biography Elvis and Me, she said she didn’t have sex until they married when she was 21.)

Amazingly, Elvis, a bona fide global star who sold some 40 per cent of his records outside the U.S., never performed anywhere but North America — and only staged a handful of concerts in Canada.

The film focuses largely on the making and selling of Elvis, and uses his manager — one-time carnival barker Colonel Tom Parker (played by Tom Hanks) — as a way into the story. It is told from Parker’s point of view, a familiar device for Luhrmann, who, as Fitzgerald did in the book, relied on Gatsby’s neighbour to narrate his 2013 film. “It might be called The Great Gatsby, but it’s actually Nick Carraway’s story,” Luhrmann says during the press conference, adding that he was drawn to Elvis because his “life is culturally at the centre of the ’50s, and socially the ’60s, and actually the ’70s. It’s a great canvas on which to explore America.”

The newly revived talk about appropriation of Black culture hasn’t tarnished the star’s legacy, and Luhrmann shows the symbiosis between Elvis and African-American culture: In the movie’s trailer, Elvis, as a boy, ducks into a revival tent and joins Black worshippers as they sing and dance. The singer was also inspired by the blues, and forged relationships with people like James Brown, who called him a “soul brother.”

If the new biopic is going to resurrect Elvis in pop culture, it is going to do so by calibrating his legacy as a style icon, since Luhrmann’s movies are known for their visual punch, and his wife, four-time Oscar-winner Catherine Martin, is designing the costumes. While the image seared into our collective memories is Elvis, in his later years, wearing a Vegas-happy white jumpsuit with sequins and flared pants, his style was something else in the 1950s. Elegantly clean-cut, with a dash of punk. High-waisted trousers with pleats. Oxford button-downs. Shirtsleeves lackadaisically rolled up to give good bicep. Polo shirts in a blast of colours, including pink (uncommon for men, before him). Patterned socks. Two-toned shoes. The odd pinkie ring or metallic bracelet. A look so timeless that you see guys like singer Nick Jonas and actor Ryan Gosling working it today.

His greatest style contribution, though — and one that continues today — is the popularization of the Cuban-style bowling shirt. The Heartbreak Hotel heartthrob rocked those hard and made them a full-on menswear trend (as seen in a popular picture taken backstage at the 1956 Milton Berle Show in California). The shirts have never really fallen out of fashion since, popping up cyclically on both runway models and fashionable hipsters.

His influence on hairstyles was no exception. The mid-century Elvis pop pompadour (or quaff, as it was called then) was a staple, and you can still see it on stylish blokes like DJ and record producer Mark Ronson. One look associated with Elvis, which has been adopted  by some rappers, is
the famous gold-lamé suit (as seen in collage above), donned for his 1957 concert tour across the U.S. and Canada, and later worn on the album cover for 50,000,000 Elvis Fans Can’t Be Wrong. The gold tuxedo, which included a jacket, trousers, belt, shoes and necktie, was custom-made by Nudie Cohn at Nudie’s Rodeo Tailors and cost US$10,000 at the time. As a single look, it is only rivalled by the head-to-toe black leather ensemble he wore as he lip-curled his way through his “’68 Comeback Special” TV show — an aesthetic later detected in Robert Mapplethorpe photographs and any miscellany of kink. It is clear from many of his more theatrical looks that, without Elvis, there would have been no Bowie.

But even if the DNA of Elvis is wired into pop culture at this point, to what extent do younger people really know the intricacies of this boomer giant? As American culture writer David Deal mused recently in an essay for the online publishing platform Medium: “I wonder how many gen-Zers [the generation born after 1997] know who Elvis is beyond a vague memory of his music being in Lilo & Stitch?”

That is the importance of a big production like Luhrmann’s. Movies, as Deal writes, “can rewrite history by reintroducing us to an artist in a different context,” boosting the value of an artist’s brand, and ratcheting up sales of music and merchandise. It happened with the release of The Doors, What’s Love Got to Do with It (Tina Turner), Bohemian Rhapsody (Queen) and Rocket Man (Elton John), among other music-heavy biopics.

Expect Elvis to join that club, courtesy of the always-rhapsodic Luhrmann, as the late great icon gyrates into the zeitgeist once more.

A version this article appeared in the June/July 2022 issue with the headline ‘The hotly anticipated Baz Luhrmann biopic will resurrect the King for a
new generation’, p. 20.