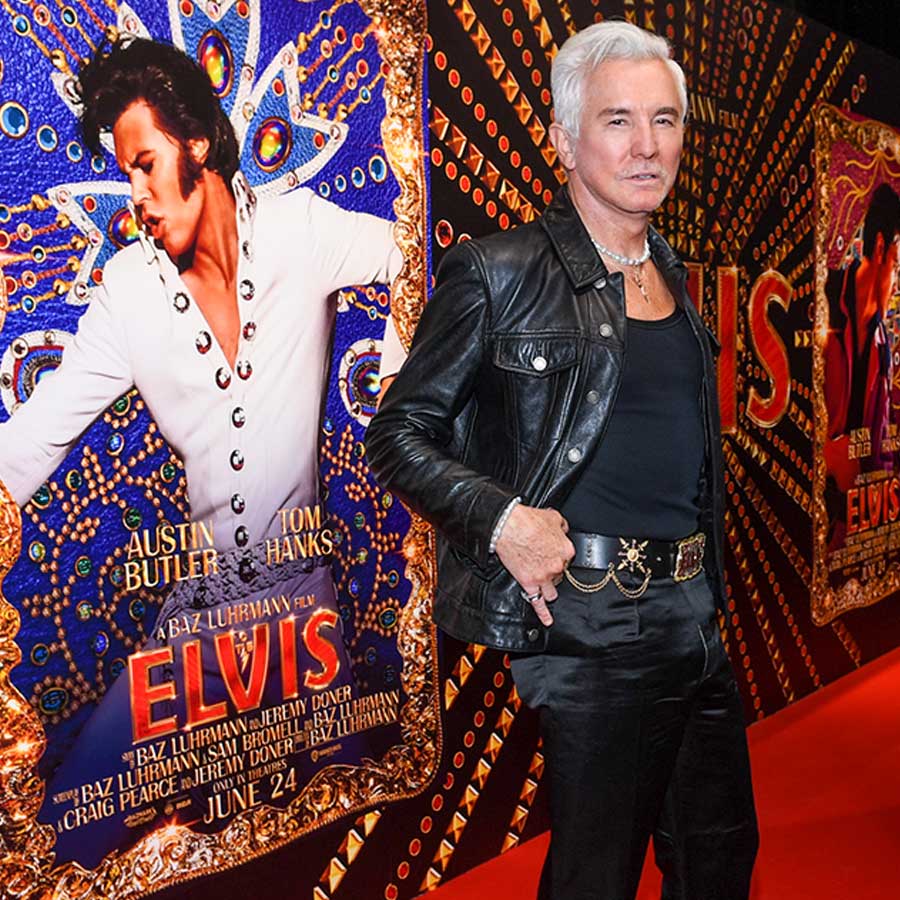 Australian director Baz Luhrmann is no stranger to the allure and legacy of Elvis Presley. Last week, ahead of the Canadian premiere of his highly anticipated biopic Elvis in Toronto, the 59-year-old exuded quiet confidence as he sat down in a hotel for a one-on-one interview dressed in an all-black outfit with a sleek leather jacket for a complete rock and roll look.

The filmmaker revealed that he would watch Elvis movies in the theatre when he was a kid and that Presley left such an imprint on his life that he would only make this film if he found his perfect Elvis — which he did in Austin Butler.

And Luhrmann’s showmanship and love for the craft is visible in the way he captured the larger-than-life presence and legacy of Elvis on the big screen. From the music to the costumes to the impressive performances by the 30-year-old Butler and Tom Hanks, 65, as Presley’s manager Col. Tom Parker, the film offers viewers a front row seat to a three-decade journey through Elvis’ life. As such, we get to see the man that lights up the Vegas stage with his music and voice, but are also afforded a glimpse into the soulful and broken man behind the famous tunes. It’s in those quiet moments that Luhrmann and Butler win you over.

Zoomer spoke with Luhrmann about capturing the legacy of Elvis, casting Austin Butler, and the reaction the Presley family had to the film, which hits theatres on June 24.

MARRISKA FERNANDES: Why were you interested in recreating the cultural movement that was Elvis’s rise to stardom?

BAZ LUHRMANN: I think so much of the story hasn’t been told. You can’t deal with Elvis without dealing with his relationship to Black music and Black culture. When I started researching, I went to Memphis and I spent a lot of time academically with my team, but also spent time personally meeting people. There’s a scene in the movie where Elvis was with a bunch of little African-American kids and the preacher grabs his hand. I met [one of those] little boy(s), as an older man, and he told me that story verbatim. And for me, the greatest joy is to pursue a story and find out what’s true on the record and what’s not, but also debunk the mythology … The overwhelming experience, for me, was the realization of just the man’s humanity and his spiritualism; he’s a very spiritual, sensitive human being who had a great inner life.

MF: When it came to the responsibility of capturing the legacy of Elvis, what is the one thing you wanted to make sure you got right?

BL: I think that he was a uniter … When he was born a twin, he lost his brother. So that brother always exists. He’s in shame because his father went to jail. His family is constantly moving. And he reads comic books and he wants to be a superhero. He wants to be Captain Marvel Jr. and save his family, but also probably save the world. He’s got this desire to make things right by bringing people together. Just like we say in the movie, his superpower is his voice, his music.

MF: You did a lot of research about Elvis. Was there anything you discovered that surprised you?

BL: Many things surprised me. Firstly, finding Sam Bell [a childhood friend of Presley]. The relationship Elvis had to this group of young African American kids; the love he had for so many Black performers, who are his friends  … In the beginning [Elvis and Priscilla had] a very successful marriage but in the end, it was a very destructive marriage. It’s those marriages that people just can’t walk away from but it’s destroying both people. It’s like, ‘I know it’s not right for me. But it is scary to live without…’ It’s not the abuse, but it is carrying how big the hole might be, and how to fill it. And he already had a big hole in his heart.

MF: Why does Elvis still endure today and how does he fit into the 21st century cultural conversation?

BL: In a big way … When you do the lineage of the movie, you see where Elvis’s connection to Black music comes from. But more than that, I think you see his love of it, you see that it was contextually dangerous, that he broke segregation laws, that he was a punk and a rebel. In that scene later on when Mahalia Jackson comes and says, ‘Come and be part of a civil rights concert’ and he says, ‘I don’t think the Colonel will let me’ and Mahalia says, ‘Look, a man makes his own decisions.’ So that’s an Elvis who is in the grip of an opioid addiction. But having known Michael Jackson, and having worked with Prince twice, both of them were anti drugs and both of them suffered from addiction. I think they had it because when they’re off stage, they need to dial back the feelings that they have on stage.

MF: Austin Butler is fantastic in this film! How do you begin casting for someone to play Elvis and how did Austin embody him?

BL: I worked with a lot of great actors, some incredible talents. But then I get this tape and on it is this guy and he’s in a bathrobe, and he’s singing ‘Unchained Melody’ and he’s looking at the sky crying. It didn’t look like an audition. It just felt like someone was really in a flood of emotion and … what I learned later is that Austin lost his mom at the same time, and same year actually. That was him having a nightmare and putting it into song. So from the moment Austin walked in, he was pretty much quite down the Elvis road, he already sounded like him and studied some of the mannerisms. At some point, I think his soul and Elvis’ kind of just melded because what you don’t want is impersonation because Elvis is the most impersonated man on the planet. You want an interpretation.

MF: Zoomer spoke with Priscilla Presley a few years ago and she noted how she feared that future generations might forget about Elvis and his legacy.  What was it like screening this film from them and were you nervous about their reaction?

BL: It’s a misconception to think that the Presley’s could dictate to me anything in the movie, or get any financial reward out of the movie. But the pressure was, of course, I went to see them because I respect them. I want to hear what they could tell me. But then I got estranged from them for two years because of COVID. So I couldn’t show them any script and that’s understandable. I  completely understand … that Priscilla was putting out there that she was worried, and she should be worried: ‘What will this crazy Baz guy do with her life and her husband’s life and his legacy?’ So screening it for her was the most nerve-wracking screening I’ve ever had. And when she reacted, like she did, she wrote a note. She said: ‘If my husband was here today, he’d say, ‘Hot damn, you are me.’’ And also the way Lisa Marie reacted, which was so unexpected. She said ‘This is truly the spirit of my dad and people will feel like they’ve met someone that they didn’t know, but they’ll feel like they met someone that we knew.’ That might be the best review I’ve ever had.

Elvis is in theatres now.

The Secret to Elvis’ Pristine Pompadour and Other Hip-Swivelling Facts