From Ancient Egypt to the Hit Parade: Marilyn Lightstone Honoured by the Toronto Jewish Film Festival With Career Retrospective 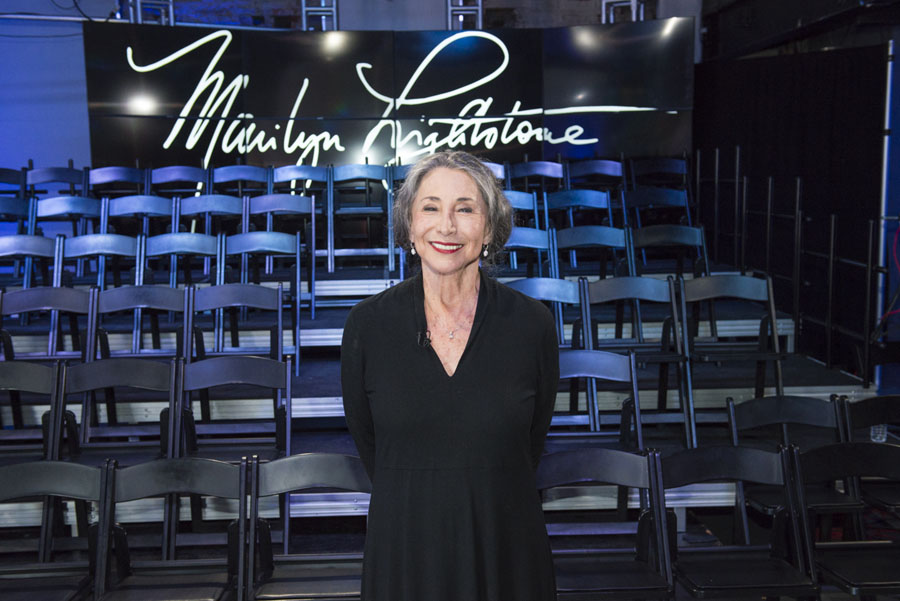 Marilyn Lightstone was honoured with a celebration of her career, including an in-person interview and Q&A event on Sunday, June 26. Stuart Hands, the Toronto Jewish Film Festival's program director, said Lightstone "makes whole the seemingly contradictory traits — a boldness, a warmth as well as a playfulness in performances that still have the ability to resonate with audiences today." Photo: Paul Alexander

You may know her as teacher Miss Muriel Stacy in Anne of Green Gables and Road to Avonlea, or from films like Lies My Father Told Me, The Tin Flute and In Praise of Older Women.

Or perhaps you recognize her best from her voice work in film, television and radio, including as the voice of The New Classical FM and VisionTV (both ZoomerMedia properties), on which she also hosts her own shows.

In fact, Marilyn Lightstone has enjoyed a career spanning more than 50 years on stage, screen and over the airwaves, and this past weekend the Toronto Jewish Film Festival (TJFF) honoured her to cap their 30th annual fest.

The TJFF had celebrated Lightstone throughout the run of the festival by featuring online screenings of four of her films: Slow Dance on the Killing Ground (1967), The Tin Flute (1983), The Wild Pony (1983) and Spoken Art: A Letter to Harvey Milk (1995). And on Sunday — the final day of the festival — the TJFF held an in-person event called From Ancient Egypt to the Hit Parade: A Marilyn Lightstone Scrapbook at Zoomer Hall in Toronto’s Liberty Village.

Hosted by Stuart Hands, program director of the Toronto Jewish Film Festival and the person who spearheaded the tribute, the event featured a retrospective of Lightstone’s various roles followed by a live interview and audience Q&A with the 81-year-old actress.

“For many years now it has been my wish to honour Ms. Lightstone,” said Hands during his opening remarks. “And what struck me [while researching her work] was how fresh Marilyn’s screen persona is as defined across television, film, musical performances and even talk show appearances. She makes whole the seemingly contradictory traits — a boldness, a warmth as well as a playfulness in performances that still have the ability to resonate with audiences today.”

Hands called Lightstone “an icon of social progress” on screen, adding that “with her innate strength and wisdom transcending the barriers of the times her characters inhabit … she brings an intuitive as well as an intellectual understanding of the social expectations on women of her characters’ eras.”

The interview and Q&A portion, meanwhile, was moderated by Mark Wigmore, host of The Oasis on The New Classical FM. Lightstone told Wigmore that she’d wept while watching the retrospective of her career and noted how her turn as Miss Stacy remains her most enduring role.

“I’ll get letters and emails from people in Russia, in Poland, and that’s a wonderful thing to think that our work transcends our physical space,” said Lightstone. “That we can reach people so far away.”

She discussed her various film and television roles and how some, like In Praise of Older Women, “took all my courage,” and that “every time you do something that’s outside your own personal realm, it expands your toolbox.”

Lightstone also spoke of the importance of discovering theatre while a student at McGill University in her hometown of Montreal in the ’60s. Following her work on a production of Dylan Thomas’ Under Milk Wood with the McGill Player’s Club — the same club where she met her partner Moses Znaimer (founder and CEO of ZoomerMedia) — Lightstone attended the National Theatre School.

“It was life changing for me because it finally gave me the position of who I really was in my heart,” said Lightstone. “And I think that’s the greatest joy you can have — when you feel like what you have to offer, what you are, the things that engage your brain and your heart, that you are able to have a place to put it where it will be important, effective, meaningful to other people. So the theatre school was the beginning of all that.”

Lightstone also touched on her guest role on a 1986 episode of Cheers to other film roles and her passion for digital art — for which she hopes to hold an exhibition of her work post-pandemic. She also spoke of her current projects, from hosting the evening program Nocturne and her podcast Marilyn Lightstone Reads on The New Classical FM to the series Your All Time Classic Hit Parade on VisionTV.

And to cap off the discussion, Lightstone commented on her sadness regarding troubles in the world, from the Russian invasion of Ukraine to the overturning of Roe v. Wade in the United States. When asked about the need for artists to keep working and creating art in troubled times, she said, “We have to. We have to try. Certainly to know what our tribe is. Because in terms of people who are going to change things for the better, we have to be a tribe and we have to gather together and know one another and be able to call on one another to make things better.”

Marilyn Lightstone Brings Back The Classics With Her New Show