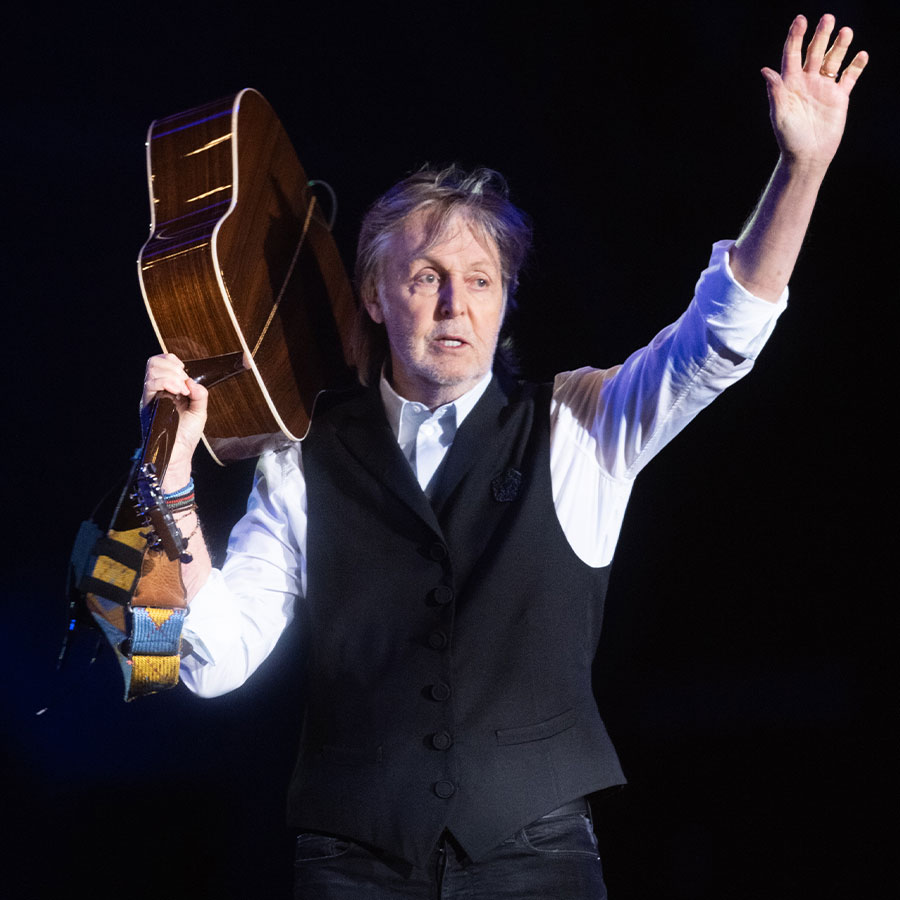 Paul McCartney during his headlining performance at the Pyramid Stage during the Glastonbury Festival at Worthy Farm, in Glastonbury, England, on June 25, 2022. McCartney, who turned 80 earlier this month, became the oldest Glastonbury solo headliner ever. Photo: Samir Hussein/WireImage/Getty Images

When Paul McCartney took to the Pyramid Stage at the Glastonbury Festival at sunset last weekend (June 25), the former Beatle once again made history: as he struck the opening chords to “Can’t Buy Me Love,” McCartney, at 80, became the oldest solo headline performer in the festival’s 52 year history. And he did it with flair, with a three hour set that spanned his entire career, some very special guests, a surprising duet, the expected singalongs and, of course, fireworks to finish. All in front of an audience estimated at over 100,000 people (the largest since the Rolling Stone’s headline slot in 2013) — many of whom had waited in place all day for McCartney’s appearance. It was a show for the ages.

On the face of it, that’s something of a surprise. An audience of 100,000 for an octogenarian whose last major hit wasn’t even released this century? This millenia?

That’s the power of McCartney.

And of Glastonbury itself.

With its multiple days and line-ups spread over multiple stages, the festival is renowned for having something for everyone (plus all the drugs and lager you could possibly want). In fact, the night before McCartney’s set, American singer Billie Eilish headlined the Pyramid Stage — at age 20, the youngest solo headliner in Glastonbury history (and, if you want to feel the cold hand of time on your neck, the first Glastonbury headliner to be born after the year 2000). The festival also featured an intergenerational line-up that included 78-year-old Diana Ross, Lorde, Phoebe Bridgers, Haim, St. Vincent, Kendrick Lamar, Supergrass, Jack White, The Pet Shop Boys, Rufus Wainwright and Robert Plant and Alison Krauss. And so, so many more. It was an embarrassment of riches.

But nothing even approached the appeal of, or response to, Paul McCartney.

Part of that is, of course, simple nostalgia: this was an opportunity to see one of the Beatles.

And, related to that, a sense of mortality: this might be one’s last chance to see McCartney, especially in a setting like Glastonbury. It’s a sobering thought and an appropriate setting, given the boomer generation essentially created the idea of a massive, star-studded music festivals with Monterey Pop in 1967, the original Woodstock in 1969 and, of course, the first Glastonbury in 1970. And now, more than five decades later, one of the generation’s most revered musical heroes still reigns supreme over one of the world’s biggest musical fests.

But despite their validity, these factors pale next to a simple fact: Paul McCartney wrote or co-wrote some of the greatest songs of the second half of the 20th century. Full stop.

A glance at the Glastonbury setlist puts it into perspective: could any other act close out their set with the likes of “Let It Be,” “Live and Let Die,” and “Hey Jude”? And those weren’t even the best songs of the night! What other performer could produce a set that spanned from a surprise track from The Quarryman (the pre-Beatles in the late 1950s) to solo tracks from the 2010s?

Or, to put it another way: the look on 72-year-old Bruce Springsteen’s face when he joined McCartney for “Glory Days” and “I Wanna Be Your Man,” the sheer joy of being on-stage and playing with the former Beatle. Or watch Foo Fighters’ Dave Grohl, 53, as he guests on “I Saw Her Standing There” and “Band on the Run.” Grohl was a toddler when “Band on the Run” was released, but the song is in his blood, part of his DNA. Like it is for all of us.

Nowhere is this more clear than in the opening of the encore, as McCartney performed ‘I’ve Got a Feeling,” a (relatively) lesser-known Beatles track that has been given new life by Peter Jackson’s Get Back, the mammoth documentary on the Let It Be sessions released last year. Look at the faces as the camera pans over the crowd, the range of ages and generations, from boomers to Gen Z and all points between, all of them transfixed and transported by the music, by the singer, by the moment.

And listen to the roar of that crowd as John Lennon appears on the screens above them, footage from the “Get Back” rooftop concert allowing McCartney — himself a generation older than the boomers — to duet with his long-lost songwriting partner.

If that doesn’t cause your heart to jump…

For one moment, for one night, for one artist, we all came together.

Savour it; we’ll likely never see anything like it again.