Cedella Marley, Daughter of Bob Marley, On the New Interactive ‘One Love Experience’ Celebrating Her Father’s Music and Legacy 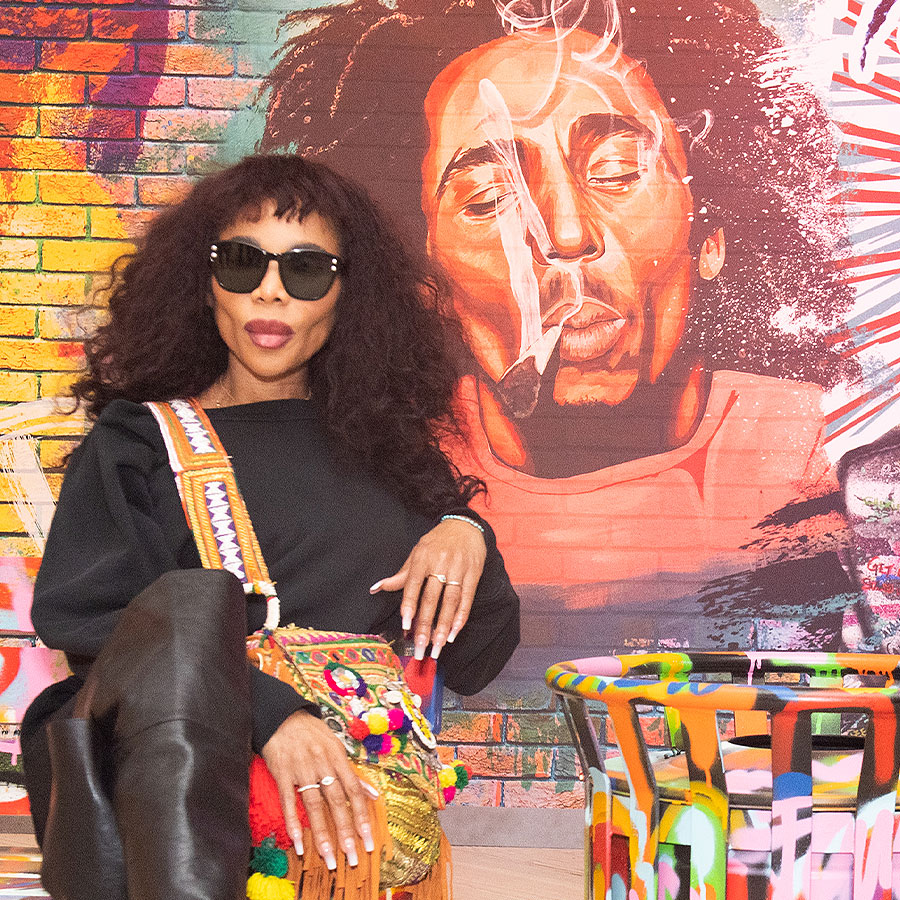 Cedella Marley, seen above at the 'Bob Marley One Love Experience' exhibit, told Zoomer that it's "so heart-warming to see how much dad still means to so many." Photo: Terrapin Entertainment

Bob Marley died at only 36 in 1981 from melanoma, but 41 years later his music and legacy continue to flourish. Testament to that is the Bob Marley One Love Experience, a vibrant interactive exhibit brimming with music and never-before-seen, larger-than-life photography now on at Lighthouse Immersive Artspace in Toronto.

Brought to Toronto by the team that produced Immersive Van Gogh, the Bob Marley One Love Experience comes direct from London, England, where it debuted at the Saatchi Gallery to rave reviews (the Evening Standard wrote: “You’d need a heart of stone not to feel the love.”) The show is presented in association with Toronto Caribbean Carnival, which returns this year after a two-year pandemic hiatus and runs July 28 to August 1.

The exhibit was also produced in participation with the Marley family, which brought Cedella Marley — the eldest daughter of Bob and Rita Marley — to town for the opening on the eve of Canada Day.

“It has been so heart-warming to see how much dad still means to so many and how much fans are enjoying the exhibit,” the 54-year-old says. “Toronto feels like the perfect place to make our first North American stop.  Dad loved playing here and there is an incredible Caribbean community and reggae scene in the city!”

Cedella Marley is a star in her own right: she is a member of the sibling group The Melody Makers, along with her younger brothers, Ziggy and Stephen Marley. The group won three Grammy awards, selling millions of albums along the way. The mother of three sons, Marley is also a fashion designer, entrepreneur, and the acting director of the Bob Marley Foundation, which funds health care and educational philanthropic initiatives in Jamaica. In addition, Cedella recorded “Can You Feel the Love Tonight,” from The Lion King for Disney Reggae Club, as well as a special version of her father’s immortal hit “No Woman No Cry” for a Starbucks compilation that raised money for Christie Turlington’s Every Mother Counts charity.

Cedella says her favourite part of the One Love Experience is the Soul Shakedown Studio, which is a virtual concert. “You would especially love the silent disco,” she says. “You dance to the beat to your own drums.” By that she means, “every headphone has different [Marley] songs, so you are never going to be listening to what I’m listening to.”

This in itself is a cool take on being together, separately.

“I spent an hour and a half in there,” she says. The music videos on display also offer different beats and vibes. “There are so many different things happening. It takes away [the] feeling of being self-conscious when you dance,” she says of the individual soundtracks. “You close eyes, get in your own zone.” It is also a celebration of being people together again, she adds. “And now you don’t have to be six feet apart.”

Meanwhile, the Forest Room, Cedella explains, “reminds me of the fern gully in Jamaica. It is serene. You could do a yoga class in there. It feels pure.” She also loves the memorabilia room, called The Beautiful Life, which boasts items like her father’s soccer shoes and a pinball machine, reflecting two of his passions.

Taken as a whole, the exhibit is a celebration of Bob Marley’s music and legacy. “It appeals across generations. I think it appeals because it is good, it is good music,” Cedella says. “When you have people who support good music it will be heard.”

Cedella is happy, too, about the new generations of Canadians who will experience her father’s music for the first time through the exhibit. “You can have children who are a month old come here and they could have a reaction to it,” she says of the music’s wide and timeless appeal. “Daddy would have actually loved it, young and old, come away feeling some type of joy and happiness, within yourself.”

The music and the imagery of Marley are clearly the focus here, while the other side of Marley’s life’s work and messaging — his political activism and his Rastafarian religion — are less visible, despite their continued relevance. For instance, in Jamaica right now there is a campaign to have the reggae legend recognized as an official national hero in time for the country’s 60th anniversary of independence  this August. And there is precedent: Barbados, for instance, just gave Rihanna a similar honour when it removed the Queen as head of state last winter. If the motion passes, Marley will join nationalist leader Marcus Garvey and Alexander Bustamante, Jamaica’s first prime minister, as an officially recognized national hero.

But Cedella says that all the facets of her father’s life are seamlessly wrapped up in his image. Bob Marley, for example, converted from Christianity to the Rastafarian Movement in the late 1960s. When asked about her father being told not to even utter the word  “Rastafari” during concerts around that time, she said nothing would stop him from spreading the word and the blessing with which he always opened his shows. “Everywhere you go now, you see Rastafarians.”

The exhibit also highlights Marley’s own familial influence. The opening night party, for example, featured a performance by Cedella’s nephew, King Cruff (his given name is Solomon Marley-Spence), who is Canadian-Jamaican hip-hop star now based in London, Ontario. Such Marley family emissaries are brought to life in the Next Gen Room, a part of the exhibit celebrating the musical legacy of Bob Marley’s lineage and their own musical talents. “You see the next generation, and the third generation,” says Cedella. “Those that are in the business, and those that are in the philanthropy, spreading that word.”

Fans can be part of the actual show, too: a room called Concrete Jungle and Fan Art Exhibit is anchored by an enormous, wall-sized, world-famous rendering of the reggae superstar by Mr. Brainwash. Canadian fans can add their own fan art to the exhibit by submitting works through the bobmarleyexp.com website for consideration.

Windrush, Music and Memories: How Songs of Resistance and Celebration Helped Shape My Identity

Harry Belafonte Turns 94: Celebrating His Legacy, From Music to Activism to Hosting ‘The Tonight Show‘