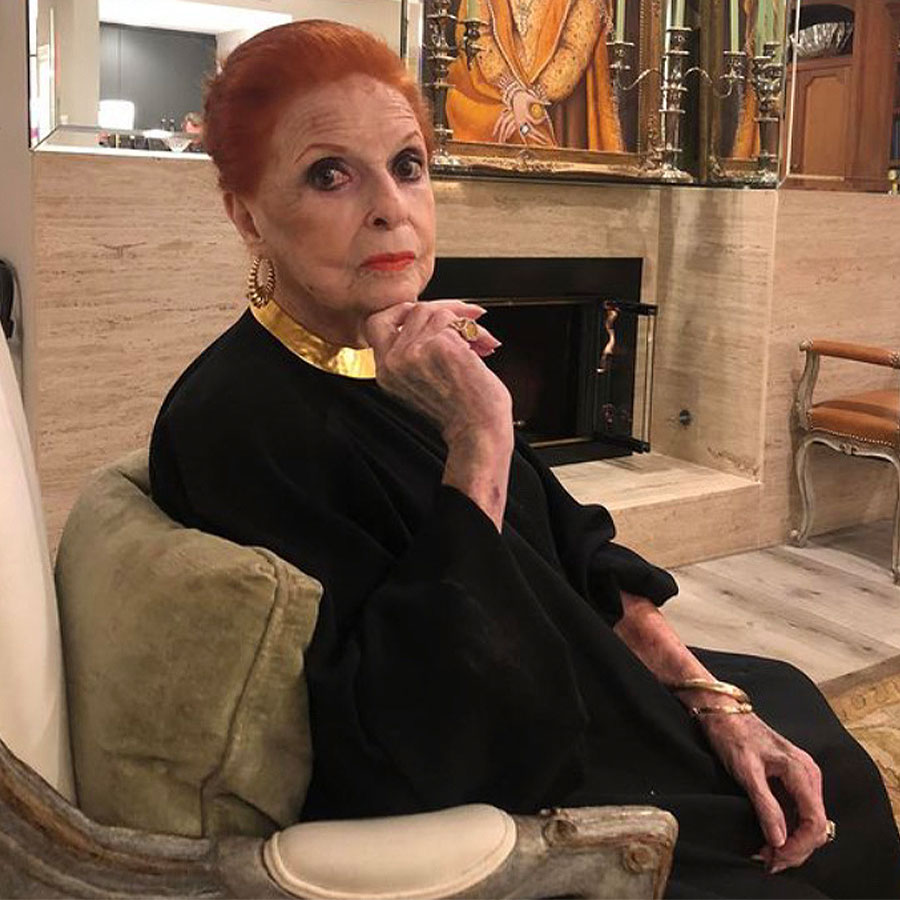 After more than 60 years on stage and screen, Carole Cook, 98, can't wait to return to her one-woman show. "I will have a ball," she told Zoomer, "and I hope the audience will, too." Photo: Mason McCulley

Carole Cook has enjoyed an acting career of more than 60 years, hitting it big everywhere from Hollywood — including alongside friend and mentor Lucille Ball — to Broadway. And now, at age 98, she’s itching to return to her sold-out one-woman stage show following its interruption by the COVID-19 pandemic. As well, it just so happens that, this weekend, Toronto’s Revue Cinema hosts a 40th anniversary screening of the 1982 film Summer Lovers — in which Cook starred alongside Daryl Hannah and Peter Gallagher.

Cook recently spoke with Zoomer about her storied life and career, her close friendship with Lucille Ball and why she looks forward to getting back on stage and performing through to age 100.

Carole Cook surveys the cabaret room with an air of authority.

Finding her place on stage, she takes the audience in with a deep breath. By the time she exhales, she has them in the palm of her hand.

“Oh, to be 90 again,” quipped the then-96-year-old actress, with a slight Texas twang floating out on the exhale, at her last one-woman show in Palm Springs, CA, in 2020, before the COVID-19 pandemic shut down performing arts venues across North America.

Now 98, and eager to hit the stage once again with anecdotes and songs from a career that has spanned nearly 70 years, Cook is firmly focused on the future and any chances she might have to reconnect with audiences that have sustained her since the first time she stepped on stage.

“It was a terrible loss for everyone,” says Cook of the pandemic shutdown. “I had wonderful things happen in my career right before the pandemic and, like the grand old lady of the theatre, I can say I have the memories.”

But memories alone aren’t enough to sustain Carole Cook. Still blessed with her exceptional voice and expressive face, framed by the trademark shock of orange-red hair that has become so familiar to generations of film, television and stage fans, she is looking forward to that next role, that next challenge, that next audience, and that next step in a journey she loves so much.

For a career that has included roles on television in everything from The Lucy Show to Grey’s Anatomy, films from American Gigolo to her iconic role as Molly Ringwald’s handsy grandmother in Sixteen Candles, and stage productions like Hello, Dolly!, Steel Magnolias and Broadway’s 42nd Street, it’s a journey that began almost by chance.

“I can’t remember ever not wanting to be an actress …”

Born Mildred Frances Cook in Abilene, Texas, in 1924, in many ways her mother was her first teacher. “She was kind of like Auntie Mame without the money and sophistication, which doesn’t leave a hell of a lot,” Cook jokes. But she still exposed her daughter to the possibilities of the entertainment industry, from shows starring the likes of up-and-coming Ethel Merman (a future friend and mentor) to a road trip up to Callander, Ont., to see the Dionne Quintuplets.

From those early days, Cook went on to study Greek drama at Baylor (“I managed to overcome it!”) but it eventually became clear that her passion veered more towards musical comedy.

Then, as now, Cook bristled at the idea of fitting into a mould — whether as a classically trained dramatic actress or as a theatrical grande dame for whom the very idea of retirement is out of the question.

“It’s about perseverance,” Cook says. “I remember when I was going to Baylor University and (drama teacher) Paul Baker said, ‘I am not sure where your talent will take you, but you have the perseverance to just keep going.’ I can’t remember ever not wanting to be an actress.”

She adds that, “Abilene isn’t exactly the hub of Broadway — you’re up to your ass in mesquite trees — but I saw my first show when I was four, knew I wanted to do that, and I never deviated. I started out in the basement of the First Baptist Church and worked my way up to Broadway, to movies. And it’s all about the journey, which is so fabulous.”

Her big break came when Lucille Ball plucked her from the stage to join her Desilu Workshop company of young actors in 1959. The then-35-year-old Cook became the protege of the iconic redhead who was looking for a comedienne to complete the team.

“She called me when I was in a production of Kismet in Warren, Ohio,” Cook says of the call to come out to California.

The audition didn’t go quite as planned, however. Cook suspects Ball was looking for someone more along the lines of a stand-up comedian rather than a comedic actress, and she felt she bombed. But that night at dinner, Ball asked about her background. She had no shortage of stories about some of the funnier things that happened back in Abilene. It did the trick.

“Lucy started laughing and it saved my life,” Cook says. “I wasn’t trying to make points anymore. I didn’t make the effort to be funny. It was who I am and she got it!”

“The trick is to be ready when you’re lucky …”

It was Ball who suggested young Mildred change her name to “Carole” in honour of her good friend, screen comedienne Carole Lombard, with whom the I Love Lucy actress said Cook shared “the same healthy disrespect for everything in general.”

Under the wing of Lucille Ball, Cook became a budding star at Desilu. It was on The Lucy Show where many television viewers were introduced to another zany redhead. Cook, in the first of many roles on the series, played Thelma Green, a friend of Lucy Carmichael (Ball) and Vivian Bagley (Vivian Vance).

“I consider myself to have known two great women in Ethel Merman and Lucille Ball — great, great, enormous, genius talents. I loved being with them; maybe because I thought some of that would splash on me. They loved their work, spent a lifetime doing it, and I don’t think Lucille Ball was happier than when she was rehearsing.”

She also recalls some advice that Ball imparted. “I remember Lucy saying clearly, ‘Carole, practice the art of selfishness,’ and what she meant by that is if you take care of yourself you are helping everyone else. In this business, you meet everyone from the lowest to the highest and I take from everyone I meet on this journey. And, if you’re smart, you take the good things. Be very selective.”

In small roles alongside her mentor, or as leading lady in the splashy 1964 film The Incredible Mr. Limpet opposite Don Knotts, Cook stood out from the crowd. But while Desilu was in the early stages of building a sitcom for her, another call changed her life.

As Carol Channing rose to Broadway immortality originating the musical role of Dolly Gallagher Levi in Hello, Dolly, producers were looking to take the show overseas to Australia. That’s when Cook came into their focus.

“The trick is to be ready when you’re lucky,” says Cook, who became just the second actress to ever play Dolly in the musical. “When I flew back to New York to audition, people in L.A. said not to go to Australia. Lucy was doing a series for me, I was under contract to Warner Brothers for two pictures a year, and things were going well. Going was a decision I made and I never regretted it. We all have choices in this business and in our private lives and you will never know whether you made the right choice or the wrong choice.”

The raves she received down under might have given Cook an inkling that she had indeed made the right choice, and it turned into a first-class education. After the run of the show, she now had more clout in her career and in public life.

In the years that followed, she landed roles on shows as varied as That Girl, Maude, and recurring roles on Dynasty, Cagney & Lacy and more. It gave her a profile that she was happy to lend to causes close to her heart, including as an early advocate for those impacted by the HIV/AIDS crisis before the virus even had a name. She also co-founded S.T.A.G.E., an annual benefit that ran for nearly 40 years, raising money for those living with HIV/AIDS.

“People I loved had been struck,” she says. “Some of the people I loved the most had it and that is what I wanted to do … I never felt afraid of AIDS. We would go to the hospital to visit our friends wearing heavy gowns and masks, but we knew it was to protect them from us and vice versa.”

The 1980s was a particularly busy time for the actress. In addition to starring in the original Broadway run of 42nd Street, she tapped into a new audience as Grandma Helen in John Hughes’ Sixteen Candles. “I had no idea when I did the movie it would become a cult classic,” she says. “I’m just thrilled that I can still be recognized at this age. You love it when someone appreciates what you do for a living. It may not be the greatest living, but the fact is that if you can practice what you love, you’re truly blessed.”

“I think getting old has its moments …”

That love for her work still continues to drive Carole Cook toward her ninety-ninth year.

Mobility issues have led she and her husband of nearly 60 years, fellow actor Tom Troupe, to downsize. Now living with their nephew in Los Angeles, a portrait of Cook as fellow redhead Queen Elizabeth I dominates their space.

It is, she says, “another plateau” in their lives — one that has allowed her time to re-think ways to stay active. That includes a retooling of her popular one-woman show — which she describes as her own personal brand of “Glitter ‘n’ Tits” — in cabaret rooms like Palm Springs’ Purple Room and even New York City’s 54 Below, where she played to sold-out audiences in 2018 at the age of 94.

“Look, I think getting old has its moments; it sucks sometimes, and it’s not that I’m a goody two-shoes, but you have to think about what you can do and, now, what you can’t do. I married a ‘toy boy’ — Tom’s 94! — and we still talk about what we’re going to do next. We’re talking about bringing my show back so when the curtain goes up, I will be ‘discovered’ on the stage. And you know what? I will have a ball — and I hope the audience will, too.”

After The Ricardos: Lucie Arnaz Talks the Post ‘I Love Lucy’ Lives of Her Parents, Lucille Ball and Desi Arnaz

‘Lucy & Desi’: Lucie Arnaz On the New Doc That Allows Her Parents to Tell Their Own Story